BeiGene's Good Year and a Promise of More to Come

With its fortunes soaring this year, BeiGene's stock has skyrocketed more than 240 percent over the past nine months thanks, in part, to a deal with biotech giant Celgene. 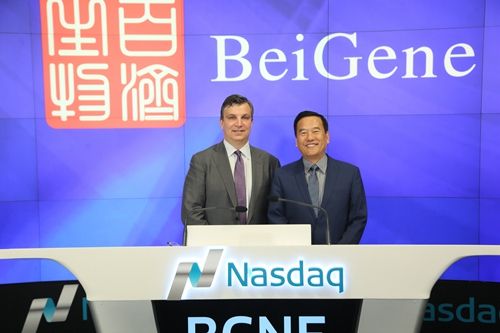 Stock markets have enjoyed a good ride in the first nine months of this year.

From the beginning of the year through September, the Dow Jones Industrial Index increased more than 13 percent, the Nasdaq was up nearly 21 percent, and the S&P 500 was 12.5 percent higher. For the tech-heavy Nasdaq, this year has seen the strongest first-half showing since 2009.

It is also a good year for Chinese companies listed in the U.S. market. And one stock, in particular, has seen its fortunes soar: BeiGene Ltd. (NASDAQ: BGNE), whose stock skyrocketed more than 240 percent over the past nine months.

In its initial stock offering, BeiGene, with headquarters in Beijing, priced its 7.6 million shares at $24 per share. They are now trading near $100 per share. When it first got listed, BeiGene had no drugs in its portfolio, and the company was only five years old.

Today, BeiGene is a biopharmaceutical company striving to becoming a leader in the discovery and development of innovative, molecularly targeted and immuno-oncology drugs for the treatment of cancer.

In 2016, when other Chinese companies were trying to make an offer to take their companies private, BeiGene decided to get listed in the U.S. and eventually raised more than $158.4 million through its IPO. Goldman, Sachs & Co., Morgan Stanley and Cowen and Co. were the joint book-running managers.

Since then, BeiGene has signed a collaboration agreement with biotech giant Celgene Corp. (NASDAQ:CELG), and BeiGene has started to see terrific revenue by selling Celgene's drugs in China.