Ppdai.com's IPO plan to raise $350 million. The shares are expected to trade on the New York Stock Exchange later today under the symbol "PPDF." 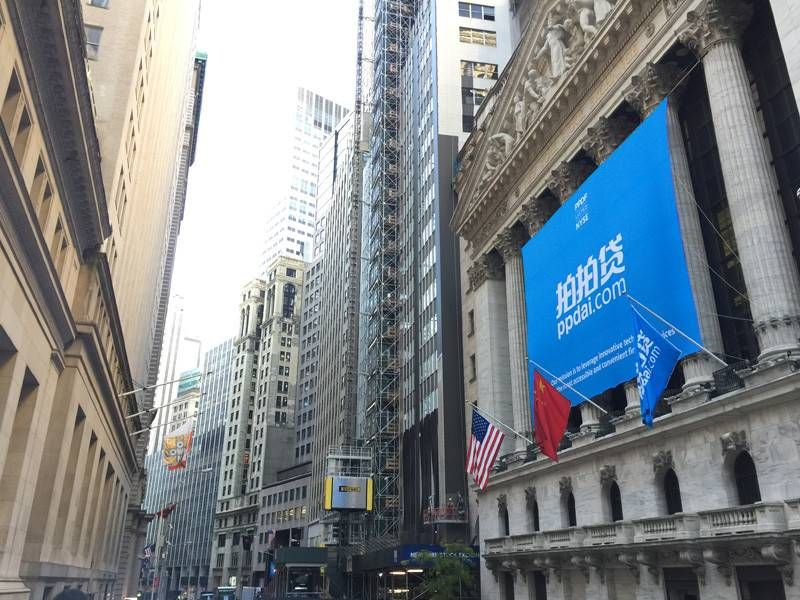 The issuance of shares by Paipaidai is being watched closely by investors as the FinTech industry continues its arrival to Wall Street.

Shanghai Paipaidai Financial Information Service, also known as Ppdai.com, filed Oct. 13 for an initial public offering. According to documents filed with the Securities and Exchange Commission, Ppdai.com's IPO is expected to raise $350 million. The shares are expected to trade on the New York Stock Exchange later today under the symbol "PPDF." Credit Suisse, Citigroup, and Keefe, Bruyette & Woods are serving as underwriters.

Paipaidai's lending platform, similar to the Lending Club in the U.S., is one of the largest peer-to-peer (P2P) lending companies in China. The company has more than 48 million registered users, and the cumulative number of borrowers has reached 6.9 million as of June 30, 2017.  The company generates revenues primarily from fees charged to borrowers for services in matching them with investors.

The company focuses on serving borrowers between the ages of 20 and 40, a generation that is typically more receptive to internet financial services and is poised to become the major driving force behind China's consumer finance market. Many borrowers have limited or no credit record. The platform offers short-term loans to these borrowers to meet their immediate credit needs while allowing them to gradually establish their credit history through activities on the company's platform. Other investors in Paipaidai include Lightspeed China Partners, SIG China Investments Master Fund III, LLLP and Noah Fortune, which is one of the fastest growing FinTech companies in China.

First of all, because of the relatively short history of the online consumer finance industry in China, the PRC government has yet to establish a comprehensive regulatory framework governing the Fintech industry. If the market does not develop as we people expected, the profitability of these platforms could be materially and adversely affected.  For example, earlier this year, banking regulator suddenly announced the suspension of student loans following incidents of students committing suicides. Many lending platforms specialized in Uni-lending suffered immediate revenue drop.

On the other hand, the competitions among different lending platforms become more intense. Analyst, specialized in FinTech, Hao Qian pointed out that all these fintech companies aim to raise as much capital as possible before the margin for cash loan business start to shrink as the competition grows. After all, these Fintech companies, listed or about-to-get-listed, are all doing more or less the same business. In the long run, cash loan or peer to peer lending services will not generate as much growth as they describe in the prospectus.

Another potentially troubling disclosure was that Paipaidai had partially financed certain undersubscribed loans with its own funds to enhance borrowers' experience on the platform. The company also financed some of their cash loan products with own funds for a brief period after their launch.

Although the platform has gradually ceased such practices after August 2016 when the Interim Measures, which prohibits online finance information intermediaries from investing in loans using their own funds unless otherwise stipulated by laws and regulations, the company may still subject to fines or other penalties for such practices. In short, issuing loans without the People's Bank of China's permit is deemed to be illegal.

Paipaidai is proud of its proprietary automated underwriting systems that could retrieves relevant data from the borrower's credit history and application documentations and arrives at a logic-based loan decision in less than one minute.

The company utilize its proprietary credit assessment model, or the Magic Mirror Model, to effectively evaluate borrowers' credit profiles and likelihood of default.  According to its prospectus, The Magic Mirror Model is built based on massive data collected through various channels, and strengthened by sophisticated artificial intelligence and advanced machine learning techniques. It categorizes borrowers into different credit ratings according to their risk profiles, based on which its risk pricing system assigns them appropriate interest rates, credit limits and loan durations. The company disclosed that 96.1 percent of loan applications filed on its paipaidai.com platform are processed through this fast computer-generated loan underwriting system. It's faster than the manual processing but at the same time could cause higher risk when these decision-making and scoring systems contain programming errors.

"If our credit-scoring model is flawed or ineffective, or if we otherwise fail or are perceived to fail to manage the default risks of loans facilitated through our platform, our reputation and market share would be materially and adversely affected, which would severely impact our business and results of operations," the company said.

The other Chinese fintech company Qudian have gone on a wild ride following intense media criticism, the stocks went down 24 percent since IPO. Stocks of Hexindai also plummeted 27 percent in past week.

With tougher competition and tighter regulation, all P2P players need to plan carefully after they ring the bell in New York. Overall, going public is by no means the final step, but just the beginning of a long journey.  A journey that requires management demonstrating responsibility not just to shareholders, but also to the public.

YOU MAY LIKE
Prev：CNIT Hints At Growth Potential Next：Will the U.S. Investors Welcome Another FinTech Company from China?