The government aims to expand its economy by 6.0 to 6.5 percent in 2019, Premier Li Keqiang said at the opening of the annual meeting of China's parliament 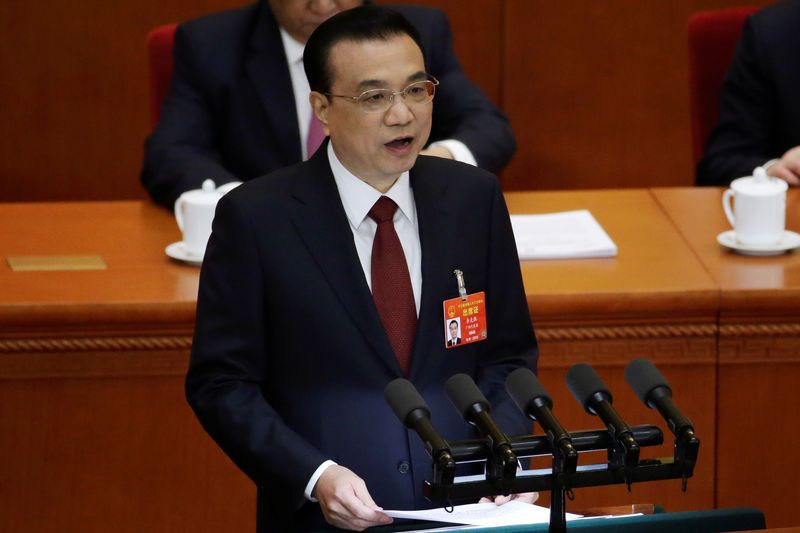 BEIJING (Reuters) - China will cut billions of dollars in taxes and fees, increase infrastructure investment, and step up lending to small firms, Premier Li Keqiang said on Tuesday, as the world's second-largest economy looks set to slow further this year.

The government aims to expand its economy by 6.0 to 6.5 percent in 2019, Li said at the opening of the annual meeting of China's parliament, less than the gross domestic product growth of 6.6 percent reported last year.

Sources told Reuters earlier this year that China would cut its 2019 growth target to 6.0 to 6.5 percent from the 2018 target of 6.5 percent amid growing economic headwinds.

Adopting a target range rather than a single growth figure gives policymakers room to manoeuvre as economic uncertainties in China grow.

GDP last year expanded at its slowest pace since 1990 due to the trade war and Beijing's crackdown on financial risks, which raised corporate borrowing costs and hurt investment.

To help shore up the economy, China's fiscal policy will become "more forceful", Li said, with the government penciling in cuts of nearly 2 trillion yuan ($298.31 billion) in taxes and fees for companies.

Value-added taxes will also be reduced to support the manufacturing, transport and construction sectors.

With the economy losing steam, China's top leaders are closely watching employment levels as factories could be forced to shed workers, despite a more resilient services sector.

The government aims to create more than 11 million new urban jobs this year and keep the urban unemployment rate within 4.5 percent, he added, unchanged from its 2018 goals.

Beijing has lowered reserve requirements for commercial lenders five times in the past year to spur loans to small and private companies - vital for growth and jobs.

This year, the government has set a budget deficit target of 2.8 percent of GDP, up from last year's 2.6 percent, reflecting lower tax revenue and higher government spending.

The government has also set a consumer inflation target of around 3 percent, Li said in his report at the opening of the National People's Congress (NPC) on Tuesday, despite a recent softening in price rises to less than 2 percent, leaving space for Beijing to stimulate consumption.