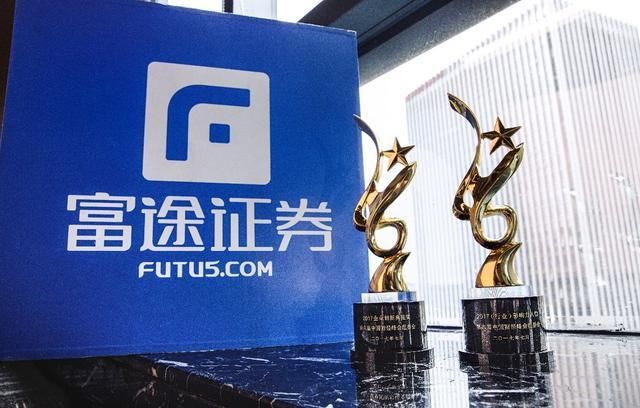 FHL is growing topline revenue sharply due to its relationship with Tencent, though some valuation metrics could be under pressure given decelerating growth in topline revenue and gross profit.

Hong Kong-based Futu Holdings was founded in 2011 to develop the Futu NiuNiu brokerage platform which represents a user-oriented and cloud-based software system with a securities brokerage license in Hong Kong.

Management is headed by Founder, CEO and Director Leaf Hua Li, who was previously the head of Tencent's multi-media business and its innovation center.

The company has developed a digital trading platform that focuses on user experience while integrating clear and relevant market data, social collaboration, and trade execution.

The company's main sources of revenue are its trade execution and margin financing services.

Investors in Futu Holdings include Sequoia Capital China, Matrix Partners China, and Tencent Holdings. They have invested at least $215.5 million in the firm to-date.

The firm sources new customers primarily through the online platform of investor and partner Tencent.

Management has also integrated social sharing tools throughout the system to create a financial "social network" of sorts.

Sales and marketing expenses as a percentage of revenue have dropped considerably as the firm has scaled its operations, per the table below:

Average Revenue per paying client has increased sharply but at a slightly decelerating rate, per the table below:

According to the F-1 statement, Hong Kong is the world's fourth-largest securities market, whose annual trading volume has grown from $404.5 billion in 2012 to $1.6 trillion in 2017.

The main factors driving market growth are a growing number of online brokers (from 126 in 2007 to 274 in 2016), innovative technologies, and increasingly active local and overseas investors. 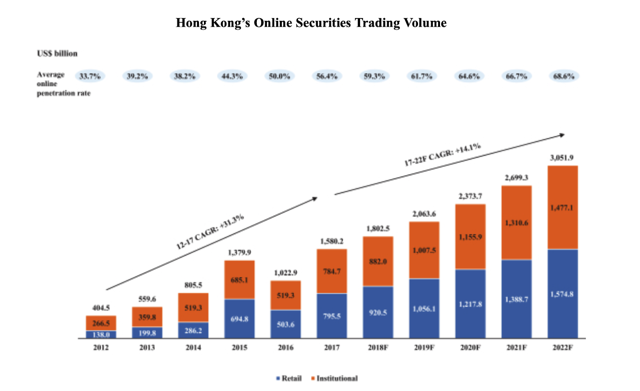 FHL's recent financial results can be summarized as follows:

FHL intends to sell 7.5 million ADSs representing 60 million Class A underlying shares at a midpoint price of $11.00 per ADS for gross proceeds of approximately $82.5 million, not including the sale of customary underwriter options.

The amount sought is considerably less than the original filing estimate of $300 million, perhaps indicating a more challenging raising environment.

Certain affiliates of existing shareholder Tencent (TCEHY) have indicated an interest to purchase ADSs of up to $30.0 million in the aggregate at the IPO price. This is a positive signal for prospective IPO investors and is somewhat unusual for a non-life sciences company.

The founder and CEO will hold Class B shares and will be entitled to 20 votes per share vs. one vote per share for Class A shareholders. This is a way for management to retain voting control of the company even after losing economic control. The S&P 500 Index no longer admits firms with multiple classes of stock into its index.

Assuming a successful IPO at the midpoint of the proposed price range, the company's enterprise value at IPO would approximate $1.37 billion.

Excluding effects of underwriter options and private placement shares or restricted stock, if any, the float to outstanding shares ratio will be approximately 10%.

Per the firm's most recent regulatory filing, it plans to use the net proceeds as follows:

"The primary purposes of this offering are to create a public market for our shares in the form of ADSs for the benefit of all shareholders, retain talented employees by providing them with equity incentives and obtain additional capital. We plan to use the net proceeds of this offering for general corporate purposes, including research and development, working capital needs, and increased regulatory capital requirements of the HK SFC and regulatory authorities in other jurisdictions as a result of our business expansion."

Below is a table of relevant capitalization and valuation metrics:

As a reference, Futu's clearest comparable would be Interactive Brokers (IBKR); shown below is a comparison of their primary valuation metrics:

Futu has experienced a sharp growth trajectory, likely a cause of its relationship with Tencent that results in greater capital efficiencies and stronger growth metrics.

There is a significant market opportunity for garnering increasingly affluent Chinese investors who are interested in investing in overseas markets, especially in the wake of highly volatile mainland China markets in Shanghai and Shenzhen.

Among others, FHL competes with another Chinese company seeking to go public, Up Fintech (Tiger Brokers), which is much smaller and has unattractive financial metrics by comparison.

On the legal side, like many Chinese firms seeking to tap U.S. markets, the firm operates within a VIE structure or Variable Interest Entity. U.S. investors would only have an interest in an offshore firm with contractual rights to the firm's operational results but would not own the underlying assets.

This is a legal gray area that brings the risk of management changing the terms of the contractual agreement or the Chinese government altering the legality of such arrangements. Prospective investors in the IPO would need to factor in this important structural uncertainty.

Goldman Sachs [Asia] is the lead left underwriter for the IPO.

As to valuation, FHL management is asking investors to pay an EV / Revenue multiple of 9.54x, which is a relative bargain compared to that of Interactive Brokers (IBKR) at 16.96x.

However, the firm has half of IBKR's EBITDA on an enterprise value basis and a fraction of its earnings per share.

So, the IPO presents investors with a fast-growing firm riding the coattails of Tencent's enormous Internet presence in China while showing decelerating topline revenue and gross profit growing handily despite a relative deceleration.

The IPO is undervalued in some respects yet could be overvalued in others. With a low-float IPO as a result of the new concurrent private placement with General Atlantic Singapore FT, prospective investors will need to take all of the relevant factors into account and keep a close eye on the potentially volatile post-IPO action for the stock.

(The opinions expressed by contributing analysts do not reflect the position of CapitalWatch or its journalists. The analyst has no positions in stocks mentioned, no plans to initiate any positions within the next 72 hours, and no business relationship with any company whose stock is mentioned in this article. Information provided is for educational purposes only, may be incomplete or out of date, and does not constitute financial, legal, or investment advice.)

YOU MAY LIKE
Prev：ANALYSIS: Asia Times U.S. IPO Is Richly Valued Next：ANALYSIS: Up Fintech Proposes Terms For $78 Million U.S. IPO