Li's comments suggest Beijing is ready to roll out more stimulus measures to ensure the economy grows within a targeted range of 6.0 to 6.5 percent. 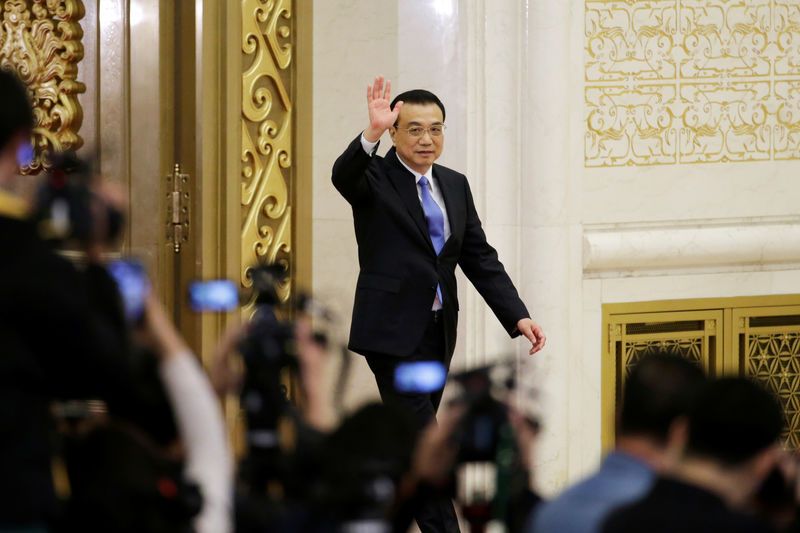 BEIJING (Reuters) - The Chinese government has additional monetary policy measures that it can take to support economic growth this year, and will even cut "its own flesh" to help finance large-scale tax cuts, Premier Li Keqiang said on Friday.

China has promised billions of dollars in tax cuts and infrastructure spending to help businesses and protect jobs, as economic momentum is expected to cool further due to softer domestic demand and the trade war with the United States.

Li's comments suggest Beijing is ready to roll out more stimulus measures to ensure the economy grows within a targeted range of 6.0 to 6.5 percent. Gross domestic product grew 6.6 percent in 2018 - the least in 28 years.

Shares on Chinese stock exchanges climbed after the government reaffirmed its commitment to boosting growth. The yuan recovered from a three-week low against the dollar after Li's comments.

"Of course, we are faced with many uncertain factors this year. We have to prepare more and we have reserved policy room" to address uncertainties, Li told a news conference after the annual parliament meeting ended.

"Moreover, we can deploy quantity-based or price-based policy tools such as reserve requirements and interest rates. This is not monetary easing but to more effectively support the real economy."

The support measures rolled out so far are taking time to kick in and most analysts believe activity may not convincingly stabilize until the middle of the year.

The central bank has cut banks' reserve requirement ratios (RRR) five times over the past year, with a two-stage RRR cut in January releasing a total of 1.5 trillion yuan ($223.23 billion) into the financial system.

Further cuts in RRR had been widely expected this year, after fresh data pointed to persistently soft demand in the Asian economic giant, raising fears of a sharper slowdown.

Sources told Reuters in February that the central bank is not yet ready to cut benchmark interest rates to spur the slowing economy, but is likely to cut market-based rates.

The premier said the government would take multiple measures to lower funding costs for small and micro firms by 1 percentage point this year.

An across-the-board cut in borrowing costs could also risk another flare-up in debt and speculative activity like that in the wake of the 2008-9 global financial crisis.

To help finance the tax cuts, the government would need to tighten its belt, Li said.

China will bolster its national coffers by collecting more of the profits earned by some financial institutions and centrally-owned firms, while general expenditure will be cut, Li said.

That will collectively cover 1 trillion yuan of the government's planned tax cuts, he said.

"Large-scale tax cuts and fee reductions would affect the government, cutting its own flesh," Li said. "This kind of reform is equivalent to turning one's blade inward and slitting one's wrist."

Promised cuts in value-added tax (VAT) for manufacturing and other sectors will take effect from April 1, while social security fees will be reduced from May 1, Li said.

The premier announced on March 5 that the VAT for the manufacturing sector would be cut to 13 percent from 16 percent. VAT for the transport and construction sectors will be reduced to 9 percent from 10 percent.

Li's comments "reconfirm a consistent pro-growth stance, with clarity on fiscal easing and an earlier-than-expected effective date for tax cuts," Morgan Stanley said in a note, adding that it expects improved growth from the second quarter.

Beijing's tax cut efforts have focused on the manufacturing sector and small businesses that are vital for economic growth and employment. Li said the government hopes to create 13 million jobs this year, the same as last year.

"Not allowing the economy to slip out of a reasonable range, that is to say we will not allow waves of layoffs," said Li, adding the government will provide support to firms creating the most jobs.

Data on Thursday showed that China's survey-based jobless rate rose to 5.3 percent in February, from 4.9 percent in December, partly due to job shedding by export-oriented companies.

China is still negotiating with the United States to resolve their trade frictions, Li said, adding both sides have far more shared interests than conflicts, and it would be "unrealistic" to decouple the world's two largest economies.

"We hope that the consultations will be fruitful and will achieve mutual benefit and win-win. I believe that this is also the expectation of the world," Li said.

A summit to seal a trade deal between U.S. President Donald Trump and Chinese President Xi Jinping will not happen at the end of March as previously discussed, Treasury Secretary Steven Mnuchin said on Thursday.

Washington and Beijing have been locked in a tit-for-tat tariff battle as U.S. presses China for an end to practices and policies it argues have given Chinese firms unfair advantages, including subsidizing of industry, limits on access for foreign companies and alleged theft of intellectual property.

On Friday, China's parliament approved a new foreign investment law that promises to create a transparent environment for foreign firms, though there is scepticism about its enforceability.

The law, designed to ease concerns among foreign companies about the difficulties they face in China, will ban forced technology transfer and illegal government "interference" in foreign business practices.

Li stressed that China did not, and would never, ask Chinese companies to spy on other countries.

His comments came after increased international scrutiny of Chinese telecommunications giant Huawei Technologies Co. Ltd., which has been caught in the cross-fire as trade tensions ratcheted up.

YOU MAY LIKE
Prev：Daqo New Energy Returns to Profit in the Fourth Quarter Next：Jianpu Technology, Slammed by CCTV 315 Exposure Gala, Tanks Stock 13%