Tencent Music said the net loss was mostly due to a one-off $221 million share-based accounting charge related to the company's equity issuance to Warner Music Group and Sony Music Entertainment. 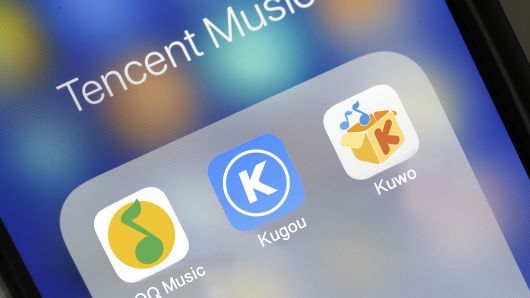 The Shenzhen-based company said in a statement today that its revenue in the fourth quarter jumped 51 percent to 5.4 billion yuan ($804.7 million), beating analysts' average estimate of 5.29 billion yuan. The big increase in revenue was driven by a jump in paying users across its online music and social entertainment services as well as the increase in user spending on social entertainment.

For the three months, the company reported a net loss of $127 million in contrast to a net profit of $78.82 million in the fourth quarter of 2017. Tencent Music said the net loss was mostly due to a one-off $221 million share-based accounting charge related to the company's equity issuance to Warner Music Group and Sony Music Entertainment.

Excluding items, the company earned 0.57 yuan per American depositary share, in line with analysts' average estimate, according to IBES data from Refinitiv.

"During the fourth quarter of 2018, we recorded strong growth across our business lines, including both online music and social entertainment services, and solidified our market leadership," said Cussion Kar Shun Pang, chief executive officer of Tencent Music. "To fuel our growth for the years to come, we are firmly committed to continue investing in premium content offering, innovative products and proprietary technology. Going into 2019, we will continue executing relentlessly our mission to use technology to elevate the role of music in people's lives."

The company jumped as much as 13 percent to $14.75 per share when it debuted, raising $1.1 billion after pricing its shares at the bottom of its targeted range of $13 to $15 apiece.

Shares in Tencent Music closed at $18.75 per share in New York today.

YOU MAY LIKE
Prev：Shineco's New Cannabis Business Sends Shares Higher and Higher Next：Up Fintech Soars 25% on Debut in New York, Priced Above Range