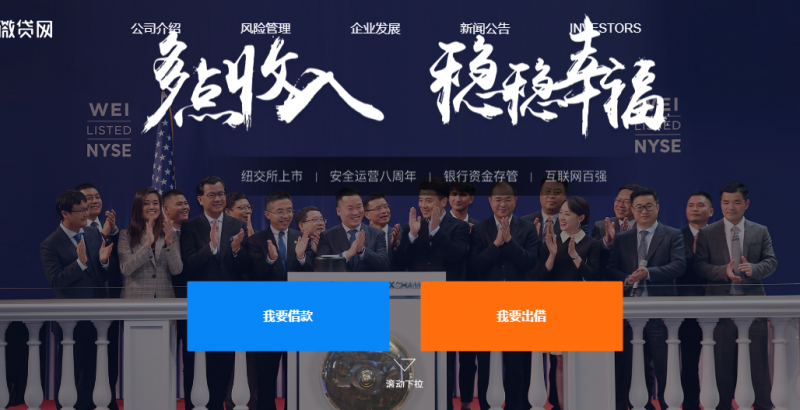 The stock of Weidai Ltd. (NYSE: WEI) was trading up nearly 2 percent early Wednesday, at $11.69 per American depositary share on strong revenue and income the company reported for the full year.

The Hangzhou-based company, an auto-secured financing platform, said in a statement Tuesday evening that its revenue in 2018 grew 10 percent year-over-year to $569.2 million. Its net income, meanwhile, jumped 27 percent to $87.9 million.

Operating costs and expenses were $90.9 million in the fourth quarter, down 3 percent.

Weidai completed its initial public offering in November, raising $45 million for 4.5 million of its ADSs. Following the offering, the underwriters exercised their over-allotment option and purchased an additional 456,427 shares, bringing the total amount raised to $50 million.

The IPO had been downsized from the $100 million Weidai targeted in its initial prospectus filed in August. According to Bloomberg, Weidai previously planned to raise nearly $400 million when it first announced its plans to list in the U.S.

Launched in 2011, Weidai was the first in China to introduce auto-backed financing in the form of a title loan with collateral registration equipped with a GPS, replacing the tradition of keeping automobiles in a lender's custody.

About the new funds, Weidai said in its prospectus that it would invest in general corporate purposes, including product development, sales and marketing activities, technology infrastructure, capital expenditures, and improvement of corporate facilities.

YOU MAY LIKE
Prev：Hailiang Education Reports Jump in Income, Revenue for First Half Next：Cango Reports Sharply Higher Earnings for Fourth Quarter