Many have expressed skepticism that any deal can permanently resolve U.S.-China trade tensions. 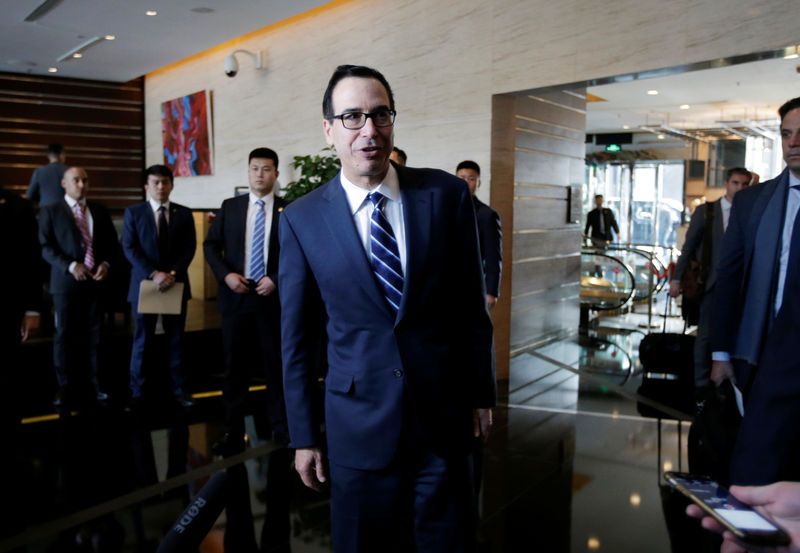 BEIJING (Reuters) - The United States and China said they made progress in trade talks that concluded on Friday in Beijing that Washington called "candid and constructive" as the world's two largest economies try to resolve a bitter, nearly nine-month trade war.

"The two parties continued to make progress during candid and constructive discussions on the negotiations and important next steps," the White House said in a statement, adding that it looked forward to the visit to Washington next week by a Chinese delegation led by Vice Premier Liu He.

The statement gave no other details on the nature of the progress.

U.S. Treasury Secretary Steven Mnuchin and U.S. Trade Representative Robert Lighthizer were in the Chinese capital for the first face-to-face meetings between the two sides since President Donald Trump delayed a scheduled March 2 hike in tariffs on $200 billion worth of Chinese goods, citing progress in negotiations.

China's state news agency Xinhua said the two sides discussed "relevant agreement documents" and made new progress in their talks, but did not elaborate in a brief report.

Earlier, Mnuchin told reporters that U.S. officials had a "very productive working dinner" on Thursday. He did not elaborate and it was not immediately clear with whom he had dined.

Trump imposed tariffs on $250 billion of Chinese imports beginning last July in a move to force China to change the way it does business with the rest of the world and to pry open more of its economy to U.S. companies.

Though his blunt-force use of tariffs has angered many, his push to change what are widely viewed as China's market-distorting trade and subsidy practices has drawn broad support.

Lobbyists, company executives and U.S. lawmakers from both parties have urged Trump not to settle simply for Beijing's offers to make big-ticket purchases from the United States to help reduce a record trade gap.

Details of where the two sides made progress were not immediately clear. Going into the talks, people familiar with the negotiations had said there were still significant differences on an enforcement mechanism and the sequence of when and how U.S. tariffs on Chinese products would be lifted.

Mnuchin and Lighthizer greeted a waiting Liu at the Diaoyutai State Guest House just before 9 a.m. (0100 GMT), and in two brief appearances before journalists, the three mingled and joked with members of the opposite teams.

Observers had anticipated the scope of this round of talks, which wrapped up about 24 hours after the U.S. delegation arrived, to be quite narrow, but that both countries hoped to signal they were working hard toward a resolution.

A U.S. administration official told Reuters earlier this week that Lighthizer and Mnuchin were "literally sitting there going through the texts," a task typically delegated to lower-level deputies.

One person with knowledge of the talks said "translation is definitely an issue," referring to discrepancies between the Chinese and English-language versions.

White House economic adviser Larry Kudlow said the United States may drop some tariffs if a trade deal is reached, while keeping others in place to ensure Beijing's compliance.

"We're not going to give up our leverage," he told reporters in Washington on Thursday.

'There Are Going to be Problems'

Many have expressed skepticism that any deal can permanently resolve U.S.-China trade tensions.

"Whatever implementation mechanism China agrees to, whether it is monthly or quarterly meetings or other check-ins, there are going to be problems," James Green, a senior advisor at McLarty Associates who until August was the top USTR official at the embassy in Beijing, told Reuters.

Trump's demands include an end to Beijing's practices that Washington says result in the systematic theft of U.S. intellectual property and the forced transfer of American technology to Chinese companies.

U.S. companies say they are often pressured into handing over technological know-how to Chinese joint venture partners, local officials or regulators as a condition for doing business in China.

The U.S. government says technology is often subsequently transferred to, and used by, Chinese competitors.

The issue has proved tough for negotiators as U.S. officials say China has previously refused to acknowledge the problem exists to the extent alleged by the United States, making it hard to discuss resolution.

China says its laws enshrine no requirements on technology transfers that are a result of legitimate transactions.