China's Xi Says Belt and Road Must be Green, Sustainable

China has not said how much the ambitious plan will cost, but some independent estimates suggest it will run to several trillion dollars. 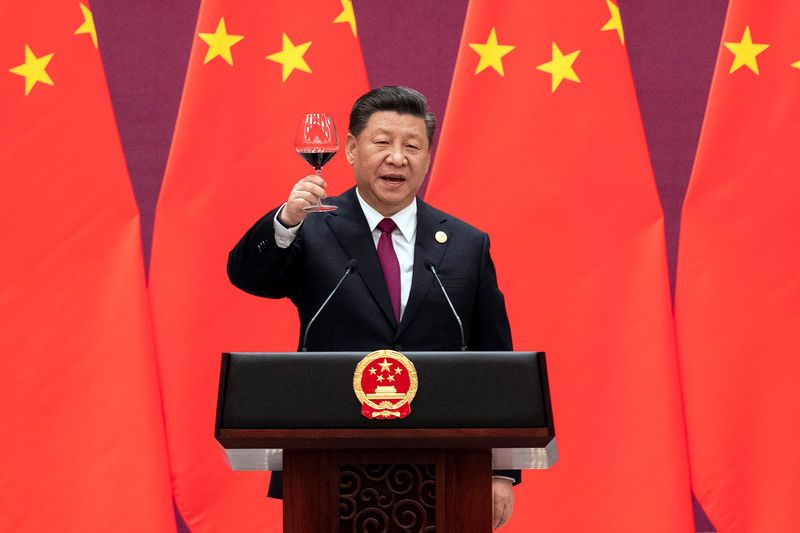 BEIJING (Reuters) - China's Belt and Road Initiative (BRI) must be green and sustainable, President Xi Jinping said in opening a summit on his grand strategy, adding that the massive infrastructure and trade plan would deliver "high-quality" growth for all.

Xi's plan to rebuild the old Silk Road to connect China with Asia, Europe and beyond has aroused controversy, as some partner nations have bemoaned the high cost of infrastructure projects.

China has not said how much the ambitious plan will cost, but some independent estimates suggest it will run to several trillion dollars.

Beijing has repeatedly said it is not seeking to trap countries that sign up to BRI with debt. It will use the summit in Beijing to address those concerns and recalibrate the policy.

Xi said in a keynote speech on Friday that environmental protection must underpin the initiative "to protect the common home we live in."

"Operate in the sun and fight corruption together with zero tolerance," Xi said.

At the first summit, in 2017, Xi said Chinese banks would lend 380 billion yuan ($56.4 billion) to support BRI cooperation. He did not give a figure for the new financing in his opening remarks at the summit, but he is schedule to give another speech, on Saturday.

Western governments have tended to view the plan as a means to spread Chinese influence abroad, saddling poor countries with unsustainable debt.

While most of the BRI projects are continuing as planned, some have been caught up by changes in government in countries such as Malaysia and the Maldives.

Those that have been shelved for financial reasons include a power plant in Pakistan and an airport in Sierra Leone, and Beijing has rebuffed critics by saying that not one country has been burdened with so-called "debt traps."

Since 2017, the finance ministries of 28 countries have called on governments, financial institutions and companies from BRI countries to work together to build a long-term, stable and sustainable financing system to manage risks, China's finance ministry said in a report released on Thursday.

Debt sustainability has to be taken into account when mobilising funds, the ministry said in the report, which outlined a framework for use in analysing debt sustainability of low-income BRI nations and managing debt risks.

Xi launched BRI in 2013, and according to data from Refinitiv, the total value of projects in the scheme stands at $3.67 trillion, spanning countries in Asia, Europe, Africa, Oceania and South America.

"The BRI is an extraordinarily ambitious vision. To turn that vision into a sustainable reality, it must work for everyone involved," British finance minister Philip Hammond said at the summit.

The potential benefits are clear, but to deliver them, BRI must operate according to the highest global standards with all parties working together within the rules-based international system to create genuine win-win outcomes for all, he said.

The BRI will also create development opportunities for China just as the country itself is further opening its markets to the world, Xi said.

He said China will "improve laws and regulations, regulate government behaviour at all levels in administrative licensing, market supervision and other areas, and clean up and abolish unreasonable regulations, subsidies and practices that impede fair competition and distort the market."

Xi promised to significantly shorten the negative list for foreign investments, and allow foreign companies to take a majority stake or set up wholly-owned companies in more sectors.

Tariffs will be lower and non-tariff barriers will be eliminated, he added.

China also aims to import more services and goods, and is willing to import competitive agricultural products and services to achieve trade balance.

Summit attendees include Russian President Vladimir Putin and Prime Minister Imran Khan of Pakistan, a close China ally and among the biggest recipients of BRI investment, as well as Prime Minister Giuseppe Conte of Italy, which recently became the first G7 country to sign on.

Khan told the summit that in a world of uncertainty, the initiative offered "a model of collaboration, partnership, connectivity and shared prosperity".

Cambodian Prime Minister Hun Sen took aim at critics who have described Belt and Road as a debt trap, pointing to the successful example of a Chinese-funded highway between Phnom Penh and the port city of Sihanoukville.

"Cambodia has not only been able to plan this project for the benefit of the people but also achieve financial engineering that does not increase public debt to the state," he said, in comments translated into English.

European countries have signalled their willingness to participate in the BRI, but key states like France and Germany have said China must in turn improve access and fair competition for foreign firms.

Major European Union countries want to sign a memorandum of understanding on the BRI as a group and not as individual states, German Economy Minister Peter Altmaier said.

The United States, which has not joined the Belt and Road, is expected to send only lower-level officials, and nobody from Washington.

"We continue to have serious concerns that China's infrastructure diplomacy activities ignore or weaken international standards and best practices related to development, labour protections, and environmental protection," a spokesman for the U.S. Embassy in Beijing said.

China's state asset regulator on Friday said at least 17 central government-owned firms, including companies such as China Railway Construction Corp and Mengniu Dairy, signed deals at the Belt and Road forum which totalled over $20 billion in value, according to Reuters calculations.

YOU MAY LIKE
Prev：First Mini Program for Country Launched By Baidu Next：Next Round of U.S. Tariffs on China at Least a Month Away - Mnuchin