China appealed to Washington to meet it halfway to salvage a deal that could end their trade war as new tariffs are set to go into effect Friday. 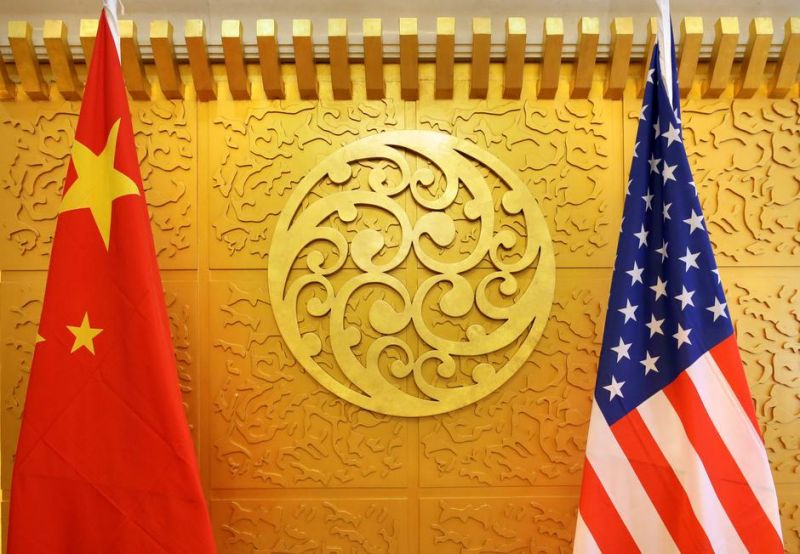 BEIJING (Reuters) - China appealed to the United States to meet it halfway to salvage a deal that could end their trade war, with its chief negotiator in Washington for two days of talks hoping to stave off U.S. tariff hikes set to be triggered on Friday.

The two sides had appeared to be converging on a deal until last weekend, when U.S. President Donald Trump announced his intention to raise tariffs with his negotiators saying that China was backtracking on earlier commitments.

"The U.S. side has given many labels recently, 'backtracking', 'betraying' etc...China sets great store on trustworthiness and keeps its promises, and this has never changed," Commerce Ministry spokesman Gao Feng said on Thursday.

Gao told reporters in Beijing that it was normal for both sides to have disagreements during the negotiating process.

Trump told supporters at a rally in Florida on Wednesday that China "broke the deal", and vowed not to back down on imposing new tariffs on Chinese imports unless Beijing "stops cheating our workers".

A protracted trade war between the world's two largest economies would damage global economic growth, and investors pulled their money out of stock markets this week amid fears of the prospective agreement unravelling.

Gao said the decision to send the delegation led by Vice Premier Liu He to Washington despite the tariff threat demonstrated China's "utmost sincerity".

"We hope the U.S. can meet China halfway, take care of each others' concerns, and resolve existing problems through cooperation and consultations," he said.

Gao urged the United States to eschew unilateral action, while warning China was fully prepared to defend its interests.

"China's attitude has been consistent and China will not succumb to any pressure. China has made preparations to respond to all kinds of possible outcomes." He did not elaborate.

In each of the seven chapters of the draft, China had deleted its commitments to change laws to resolve core complaints that caused the United States to launch a trade war: Theft of U.S. intellectual property and trade secrets; forced technology transfers; competition policy; access to financial services; and currency manipulation.

The stripping of binding legal language from the draft struck directly at the highest priority of U.S. Trade Representative Robert Lighthizer - who views changes to Chinese laws as essential to verifying compliance after years of what U.S. officials have called empty reform promises.

Lighthizer's office said tariffs on $200 billion of Chinese goods would rise to 25 percent from 10 percent at 12:01 a.m. (0401 GMT) on Friday, during the discussions in Washington.

The tariffs would target chemicals, building materials, furniture and some consumer electronics among other goods.

Trump also threatened on Sunday to levy tariffs on an additional $325 billion of China's goods, on top of the $250 billion of its products already hit by import taxes.

Since July last year, China has cumulatively imposed countertariffs of up to 25 percent on about $110 billion of U.S. products. It last levied tariffs, of 5 percent to 10 percent, on $60 billion of U.S. goods including liquefied natural gas and small aircraft in September.

Based on 2018 U.S. Census Bureau trade data, China would only have about $10 billion in U.S. imports left to levy in retaliation for any future U.S. tariffs, including crude oil and large aircraft.

Gao did not answer directly when asked if China would consider imposing tariffs on imported U.S services.

While the United States wants to reduce the scale of its trade deficit with China, it is also seeking stronger protection for American intellectual property and more market access in China for U.S. companies.

Gao described accusations about Chinese firms stealing tech secrets as unreasonable and said they were not based on facts.

Chinese state media on Thursday published and aired reports quoting U.S.-based organisations and individuals critical of Trump's decision to raise tariffs, though playing down the impact of higher U.S. tariffs on the Chinese economy.

"China is well-prepared for an escalation in trade tensions. A variety of plans are in place, such as countermeasures for any tariff rise, and favourable policies to minimise losses for Chinese enterprises," the Global Times, a tabloid published by the ruling Communist Party's People's Daily, said in an editorial.

"Mentally and materially, China is much better prepared than its U.S. counterpart."

The country's share markets have taken a battering due to the renewed trade tensions, however.

China's blue-chip CSI300 index has slumped about 7 percent so far in May while in the United States, the benchmark S&P 500 index has only declined about 2 percent.

The Chinese yuan has also weakened to a four-month low, crossing the 6.80 per dollar level.

While China's overall economic growth has remained steady so far this year, the outlook for exporters has been challenging.

Exports unexpectedly declined in April, with some analysts attributing the drop to slumping shipments to the United States.

The U.S. Commerce Department said on Thursday the politically sensitive goods trade deficit with China fell 16.2 percent to $20.7 billion, the lowest level since March 2014, also as imports from the world's No. 2 economy fell 6.1 percent. Exports to China jumped 23.6 percent in March.

"For months, U.S. companies and agricultural producers and their respective trade associations have desperately urged the two sides to come to some kind of trade agreement that would prevent the further use of tariffs by both countries, fearing such a scenario would cripple their already-damaged bilateral trading relationship," said Nelson Dong, senior partner at international law firm Dorsey & Whitney.

"However, those urgent pleas seem to have been ignored. Once again, the two countries, and indeed, the entire world's economy will be forced into a crisis mode that will likely inflict enormous losses on many individual companies and many thousands of workers and farmers in both countries."