Trump said trade negotiations would continue into the future and U.S. tariffs may or may not be removed, depending on the outcome of the negotiations. 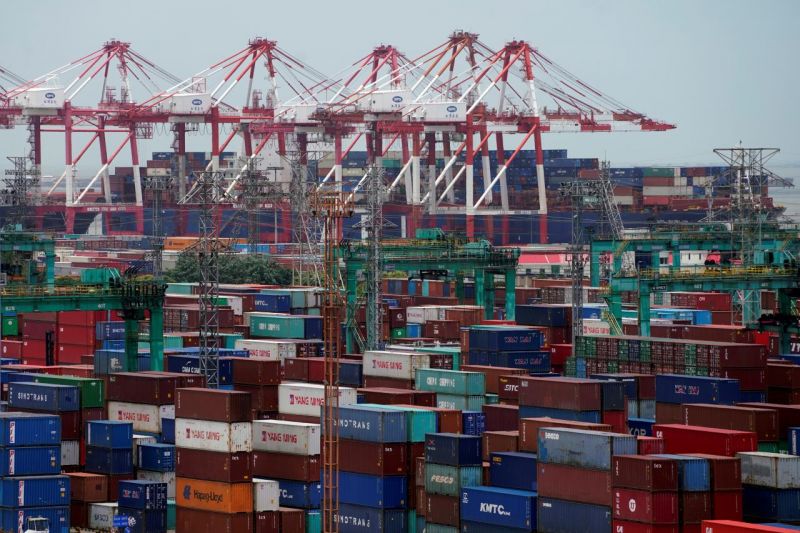 (Reuters) - U.S. President Donald Trump on Friday said he was in no hurry to sign a trade deal with China as Washington imposed a new set of tariffs on Chinese goods and negotiators ended two days of talks to try to salvage an agreement.

Trump said trade negotiations would continue into the future and U.S. tariffs may or may not be removed, depending on the outcome of the negotiations.

The United States increased its tariffs on $200 billion in Chinese goods to 25% from 10%, rattling financial markets already worried the 10-month trade war between the world's two largest economies could spiral out of control. China is expected to retaliate.

The following are reactions from Wall Street and stakeholders around the country:

"USSEC is disappointed that the United States and China have not reached a comprehensive trade agreement, resulting in increased tariffs on China. These tariffs and the lack of a trade deal to eliminate Chinese tariffs directly affects our farmers who for a year have struggled with market uncertainty. As trade talks continue, we are hopeful for a positive outcome. In the meantime, we are working with exporters and customers around the world to build demand and expand global market access for U.S. soy products."

"This potential trade deal with China would be a positive, in my view, if the two governments can work something out that makes sense for both countries. If they do not, it will be a slight vibration for the United States and a real cause of concern in China. To be quite open and forthright, we can afford a ‘No Deal' and they can as well, just not as well. Their belt would tighten around their road and their necks. Well, whoever may get blamed is not what is the center point for me. I think that the press is far more focused on this China deal than investors, especially institutional investors. I also point out that while equities have been having a tough time of it, that bonds are performing exceptionally. Whether it is Treasuries or investment-grade bonds or high-yield bonds, they have all been on winning streaks.

"'Over the course of the past two days, the United States and China have held candid and constructive conversations on the status of the trade relationship between both countries,' President Trump said in a Tweet. Then, the equity markets began to shift and turn positive as some market participants had been fearful that the talks had cratered. It is all just a 'Game of Thrones' and the game players are in constant negotiations to come out ahead. Fortunately, no armaments are part of this Game."

"The back and forth we've seen all week shows how important trade is to the market."

"Semiconductors, industrials, materials, those have been hit a little bit more than the overall market. They have a bigger China impact on their revenue. Those are probably the areas that will reverse quickly if trade tensions get better. The market is following a pretty standard script on trade tensions."

"Even if there's a new round of tariffs, there will likely be some type of deal eventually. The market is discounting the increased trade tensions but taking into account the discussions still going on. The base case for the market continues to be that we'll get a deal, which is why we haven't seen it selling off more aggressively today."

"I just think we're in for more turmoil over the next several weeks until this issue is resolved."

"This is an issue that is going to hang around for a while."

Increased tariffs on Chinese auto parts will add about $190 to the average cost of a vehicle built in the United States, she said. "Most of the cost gets paid by the consumer." she said, adding that higher costs related to tariffs could cut 66,000 vehicles from U.S. sales.

Automakers and suppliers are shifting out of China manufacturing of parts and machinery bound for the United States. But "there is no China-sized amount of underutilized capacity" to quickly take over production.

"The problem with the administration's approach is that it continues to create uncertainty in the marketplace. This is bad news for equipment manufacturers looking to take advantage of a more competitive tax code and a strong economy. And it is particularly bad for the agricultural equipment industry, which depends on a strong farm economy. The President's comments that money from the additional tariffs would allow the U.S. to buy more agricultural goods from goods from American farmers misses the mark. Our industry is looking for structural reforms to China's trade and industrial policies without tariffs, not targeted aid for farmers to offset retaliatory tariffs by the Chinese.

"The current impasse comes at the expense of equipment manufacturers, who will yet again be forced to make tough decisions at a time when they should be focused on growing their businesses. It is time to stop doubling down on tariffs as a negotiating tactic and work out a long-term deal with China, so that equipment manufacturers can focus on what they do best: build things in America."

PHIL STANG, MAYOR, KIMMSWICK, MISSOURI, FROM A MEDIA CALL ORGANIZED BY THE MISSISSIPPI RIVER CITIES AND TOWNS INITIATIVE AND THE AMERICAN SOYBEAN ASSOCIATION

"I support better trade deals for our country, certainly, but we have to keep our preeminance in the global commodities supply chain whole."

"Ultimately, people's livelihoods are on the line. I suppose I would like the administration to hear from us that there is a nuance to these negotiations that has an exponential impact on the ground. If you're going to take a tough line with China for American interests, fine, we can get behind that, but there are impacts to real folks on the farm and on Main Street USA that need to be treated with the utmost care."

"While the administration is right to take on the serious trade challenges our country has with China, I have long been skeptical that the president will deliver for American workers without coordinating with our economic and political allies. Instead, Donald Trump has spent the last two years alienating our allies, rather than enlisting them to our side. We came to this fight from a position of weakness as a result of isolation, instead of with an army of allies behind us supporting our confrontation of China's trade practices."