The stock of the Chinese entertainment platform rose 7 percent early on Wednesday after YY reported its quarterly results. 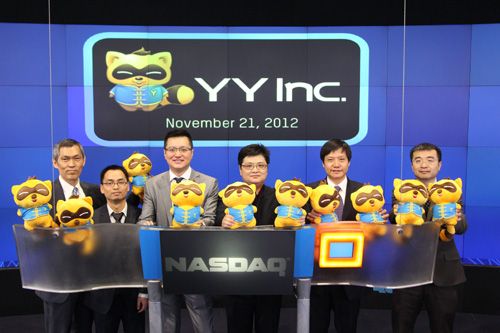 The social media platform, focusing on entertainment, enjoyed a 47 percent year-over-year increase in net revenues, amounting to $705.3 million in the three months through March, according to its statement posted after markets closed Tuesday.

Primarily driven by two-digit growth in live streaming revenues and the contribution from the consolidation of Bigo segment, YY gained its growth in expansion. YY reported the completion of its acquisition of Bigo Inc. in March 2019, which brought $393.8 million as the remeasurement gain for YY's previously holding in Bigo. Bigo is headquartered in Singapore and runs business in live streaming platform named Bigo Live, short form video social platform as Like and a video communication app of IMO.

"We carried our strong growth momentum into 2019 with solid first quarter results, driven by enhanced performances from YY, Huya and Bigo," Xueling Li, the chief executive officer of YY, said.

YY highlighted its globalization strategy after the Bigo acquisition. The company said its mobile average monthly active users reached over 400 million, among which over 75 percent were from outside of China. Bandwidth costs, highly related to the rate of data transfer, increased to $43.9 million in the first quarter from 2018, primarily reflecting continued overseas user base expansion, according to the report.

The company expressed determination to become a global social media with focus on globalization and technology, targeting overseas markets. "Going forward with the global strategy and focus on AI technology, we are confident in our ability to bring YY Group into a new stage and solicited by our position at the global video based social media platform," Li said.