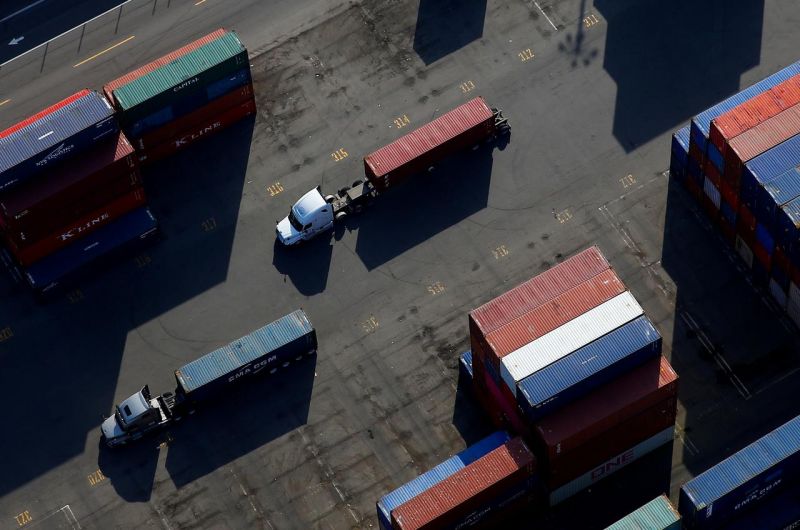 LONDON (Reuters) - The synchronized global economic expansion, cheered on by investors who pushed Wall Street stocks to a record high last month, has started to sour and is increasingly at risk from a developing trade war between the world's two largest economies.

A group of several hundred economists and financial market professionals regularly polled by Reuters over the past few years has consistently and almost unanimously warned that trade conflict is the number one global economic risk.

Central bankers and finance ministers from the G20 countries will have this to contemplate as they meet over the weekend in Fukuoka, Japan, under the long shadow of the "America First" policy pursued by their still-dominant member.

As the U.S.-China trade war has dragged on, and evidence piles up that trade volumes are taking a knock, those warnings seem all the more prescient. Federal Reserve Chair Jerome Powell appears to have come round to a similar view.

If market bets are even remotely correct, the Fed, which just months ago looked set to hike interest rates several times this year, may be only months away from following several other important world central banks like Australia's and New Zealand's in cutting rates.

J.P. Morgan, one of the largest U.S. banks, is already forecasting two Fed rate cuts this year but is casting that essentially as a successful insurance policy, with very modest changes to their outlook for global growth next year.

For her part, Christine Lagarde, head of the International Monetary Fund, told Reuters recently that the U.S.-China trade war will not cause a global recession but that the trade spat amounted to "self-inflicted wounds."

The problem is it's ongoing, and until it stops there is no way to accurately forecast what will happen next. Nor can one really predict what goes on in the minds of the world's company executives with respect to future investment decisions.

Citi economists are among those who have tried, and what they foresaw was not pretty.

"Recent developments remain consistent with our long-held view that trade tensions have not peaked, and are expected to continue with and beyond China," wrote Citi economist Cesar Rojas in a client note.

"Amid a relative balance between domestic resilience and external headwinds, a metastasized global trade war would likely trigger a cascade of economic and financial reactions that would tip the global economy into a growth recession," he wrote.

Make no mistake: The United States, which has easily outperformed its peers, is still growing reasonably strongly, with the latest read on its vast non-manufacturing industries, which make up the bulk of production, topping expectations.

But private-sector economists, most of whom are still chastised by the market for missing the last U.S. recession, see a significant 40 percent chance of a slump in the next two years.

Even the mighty U.S. dollar is catching a whiff of it.

On a shorter time horizon, past experience shows once a recession probability gets consistently that high in economists' minds - which are tempered by other things like what's good for business - there is a good chance it has already started.

Policymakers, of course, can ease their language and cut interest rates, but they rarely forecast economic slumps. Doing so is counterproductive: In setting policy aimed at supporting economies, one of their unwritten roles is to cheerlead.

Their main role, in most cases, is to manage inflation.

Yet apart from rampant asset price inflation in the decade since the Great Recession, and a sprinkling of wage inflation as the U.S. jobless rate plumbs half-century lows, there has been acceleration in little else.

That last point was underscored at the European Central Bank's news conference on Thursday where it again extended its view on how long rates are likely to remain unchanged, to mid-2020.

Inflation expectations have dropped sharply for the U.S., the eurozone and Britain since late last year and consensus forecasts remain below central banks' targets for this year and next. Over the past few months, the inflation outlook has been cut, with lower lows over the forecast horizon.

That is all the more remarkable given that in most cases, rates in the developed world barely reached what would have been described as neutral - neither stimulative nor restrictive - before the last financial crisis.

Even the Reserve Bank of India, managing one of the fastest-growing economies in the world, just delivered a third successive interest rate cut.

Can we chalk all of this up to central bank success in taming inflation? Or is it that inflation is being driven by global forces not under their control?

ECB President Mario Draghi pointed out on Thursday several factors damaging economic sentiment that he can't control, including geopolitical uncertainty, and of course, "the rising threat of protectionism

YOU MAY LIKE
Prev：Trump Threatens China With Tariffs on Further $300 Billion of Goods Next：China to Curb Some Technology Exports to U.S. - Global Times Editor