The agreement in Osaka kickstarted talks that had been stalled since May. Chinese and U.S. negotiators spoke by phone on Tuesday and are discussing a face-to-face meeting in the future. 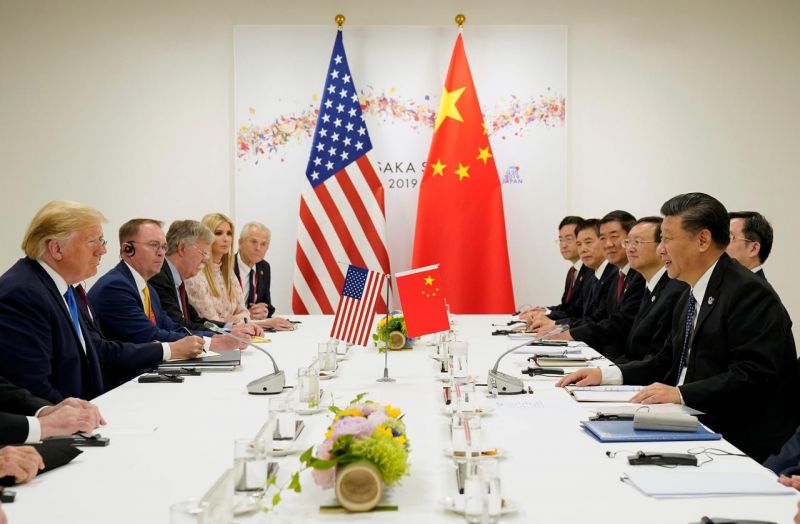 WASHINGTON (Reuters) - As trade talks resume between China and the United States, President Donald Trump's advisers are confident he can portray his stance against Beijing as a strength in the 2020 election, despite making concessions and having no deal in sight.

Trump and Chinese President Xi Jinping agreed in Japan last month to another truce in the year-long trade war between the world's two largest economies, thanks largely to Trump's promise not to impose new tariffs on Chinese goods and to ease restrictions on technology company Huawei Technologies Co. Ltd.

The agreement in Osaka kickstarted talks that had been stalled since May. Chinese and U.S. negotiators spoke by phone on Tuesday and are discussing a face-to-face meeting in the future.

But no deadline has been set for the process to conclude, leaving the possibility of a protracted negotiation that lasts well into next year and Trump's re-election fight.

"I think you're into 2020 before there's any resolution to this," said Steve Bannon, Trump's former chief White House strategist, who has advocated for a tough stance against Beijing.

He applauded Trump's decision to take new tariffs off the table and be flexible on Huawei because it got the talks between the two countries going again.

"I think it will help him politically because it's the reality of the world that we live in," Bannon said.

Trump has imposed 25 percent tariffs on $250 billion of Chinese goods and has pledged only to accept a deal with Beijing that includes structural reforms to the way China does business.

Beijing's retaliatory tariffs last year on imports of U.S. agricultural goods have struck a blow at U.S. farmers, a constituency that helped propel Trump to victory in 2016.

But Trump's bashing of China as a presidential candidate in 2016 delighted his crowds, and he is likely to highlight his tariff policy as a sign of toughness in 2020.

Washington and Beijing were close to completing a deal in May when Chinese officials balked at requirements that it change its laws to implement reforms, U.S. officials have said. While other U.S. leaders have pressured China to change its business practices, Trump's negotiating team arguably brought Beijing closer than it had ever come to an agreement to change.

Still, Democrats, many of whom also favor a tough approach to China, see potential vulnerability for Trump in his approach.

The president insists the tariffs are not hurting U.S. consumers and has offered tens of billions of dollars in relief to farmers affected by them. With no deal by 2020 and tariffs still in place, political swing states such as Iowa and Pennsylvania, which supported Trump in 2016, could swing to the Democratic candidate next year.

"From farmers in Iowa to an array of manufacturing jobs across the Midwest, swing state after swing state supported him based on the promise that he would win the trade war with China and bring their jobs back. So far he's done neither," said Scott Mulhauser, a China expert and former aide to Vice President Joe Biden, the current front-runner for the 2020 Democratic presidential nomination.

Those dynamics worry some in Trump's circle.

Stephen Moore, an outside economic adviser to the president, said a quick deal would be helpful. The de-escalation agreed to in Japan was positive, he said, but truces do not last forever.

"Perhaps this could get us through the election," said Moore, who withdrew from consideration for a seat on the Federal Reserve earlier this year after criticism of his sexist comments on women and shifts on interest rate policy.

"My personal advice to Trump ... when he's asked me about it, is get a deal that you've got now and pick up a much harder line with China after you get re-elected," he said.

Trump has not done everything he pledged to do with regard to China as a candidate in 2016. He did not declare the country a currency manipulator, and his tariff policies are balanced by frequent and glowing praise of Xi.

Famous for considering himself a skilled dealmaker, Trump did not appear to have nudged his Chinese counterpart to restore the promises Beijing reneged on in May.

"The biggest accomplishment on the trade talks is getting them (China) back to the table, but there's no date set and there was no public mention ... that they have taken back any of the 'reneging,'" said Michael Pillsbury, an outside trade adviser to Trump, adding the concessions were worth it to get talks started.

"It's a bold decision because if he hadn't done it, we might be having no talks at all."

U.S. officials said China agreed in Osaka to buy more American crops and farm products, but those purchases, despite being heralded by the president, have not taken place. Trump signaled his dissatisfaction with that fact on Thursday.

"China is letting us down in that they have not been buying the agricultural products from our great Farmers that they said they would. Hopefully they will start soon!" he wrote in a tweet.

Moving in the Right Direction?

Democrats have criticized Trump's tactics on China, while seeking to walk a careful line. Toughness against Beijing has significant bipartisan support.

Biden has had to walk back comments that China was not a threat, but he has criticized Trump's tariffs tactics.

Senator Bernie Sanders, who identifies as a democratic socialist and is also high in the polls in the crowded Democratic presidential field, considers China a currency manipulator. His campaign says he agrees on the need for a tough stance on China, just not with how Trump has carried it out.

"President Trump is the first U.S. president to stand up to China for their bad actions on trade over many decades, a position of strength that will resonate with voters concerned about American jobs," said Trump campaign spokeswoman Erin Perrine.

China's purchases or failure to purchase U.S. goods could have a political impact in 2020, too, if voters in farming and manufacturing states become convinced that Trump's pledges on that subject are not materializing.

"If people believe that things are moving in the right direction and there continues to be purchases of different agricultural goods - soybeans and other things in those key states ... then the president will be able to rightfully say things are progressing," said Sean Spicer, Trump's former spokesman and a former trade official himself.

"It's just a question of whether it's moving in the right direction."