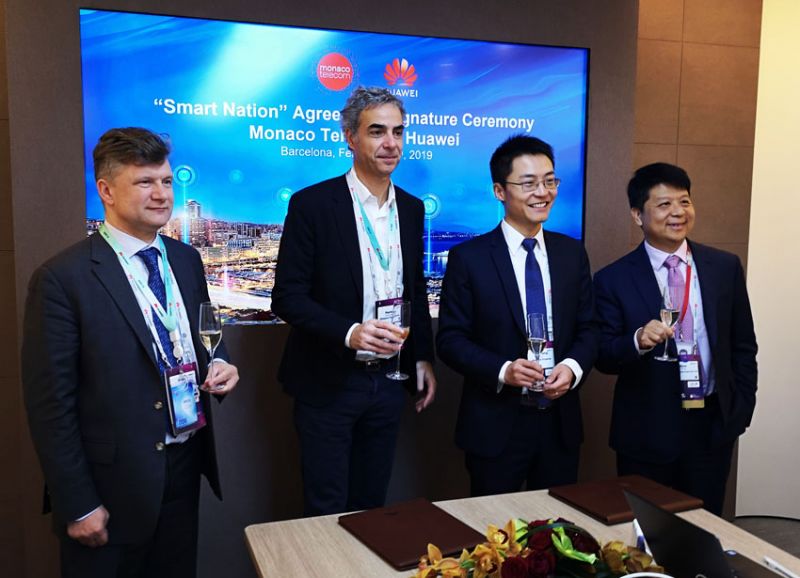 "Monaco allowed us to make a shop window in a number of areas... and can serve as a model for other operators and states," Ping Guo, the vice president of Huawei, said on local media.

Apart from Monaco, Huawei explored the markets of South Korea, Switzerland, United Kingdom, Finland, Spain, Qatar, Kuwait and Saudi Arabia, among others, to accelerate its 5G commercialization, according to a statement by Yun Ding, the managing director of Huawei, made on Shanghai's Mobile World Congress 2019 themed "5G is ON."

The 5G base station equipment supplier has assisted several telecom operators such as LG U+ in South Korea, EE in Britain, Sunrise in Switzerland, and VIVA, ZAIN and Ooredoo in Kuwait to complete the release of pre-commercial and commercial networks.

In April, Huawei technology-based LG U+5G launched 5G commercial services in South Korea, attracting 15,000 users on the first day. In the span of 20 days, 5G covered 260,000 users, of which the number of users of LG U+5G rose to 80,000. The operator LG U+ released 18,000 sites on the first day, 95 percent of which were deployed by Huawei. It is expected that by the end of this year, LG U+ will build 60,000 sites, covering more than 90 percent of the population in the country, as reported by Tencent News.

On May 30, British mobile network operator EE, in a partnership with Huawei, announced the debut of 5G services in six cities including London, Cardiff, Edinburgh, Manchester, Birmingham and Belfast. It plans to launch 5G commercial services in 10 more cities by the end of this year.

Also in May, Sunrise opened the first 5G store in Switzerland and began to accept 5G commercial terminal orders, including Huawei Mate 20 X and other brands like Samsung, Xiaomi and HTC. A recent network survey showed that the single-user rate of the Sunrise network can reach 1.5 Gbps downstream and 100 Mbps upstream. Sunrise plans to build more than 1,000 stations this year, providing 5G in homes in more than 150 townships, enabling users to enjoy fiber-optic mobile broadband services.

Already at the beginning of 2019, Huawei has set up 11 research and development centers around the world and employed more than 5,700 experts and engineers to advance the 5G revolution. The giant has thus gained a foothold in the global 5G networks market, spreading its business to include telecom networking gear, phones, laptops, tablets and other gadgets.

YOU MAY LIKE
Prev：BMW, Tencent to Open Computing Center in China for Self-driving Cars Next：Huawei First-Half Revenue Up About 30% Despite U.S. Ban