As investment dries up for technology startups, an $11 billion airport with the latest gadgets opens on Beijing’s outskirts. 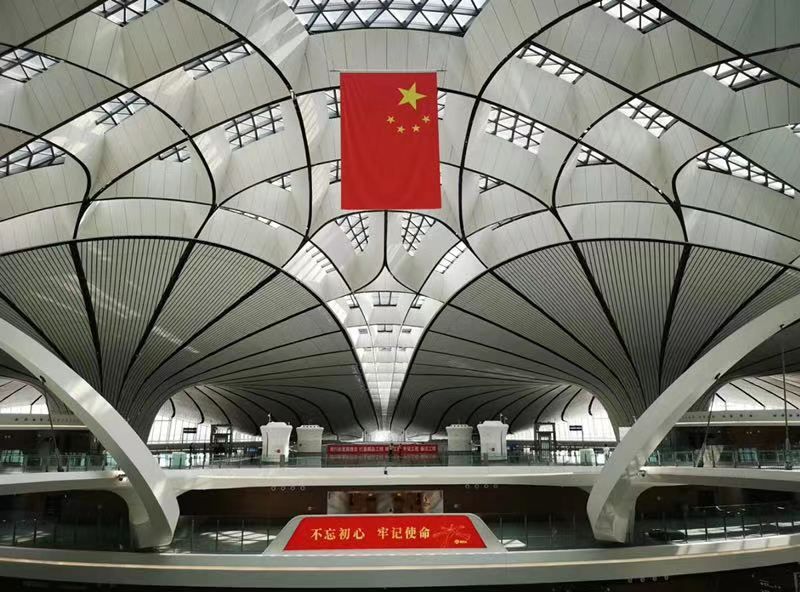 China's contrasts are part of what make the country so endlessly fascinating, and events this week put the country's disparities on full display. The opening of Beijing's dazzling new airport on Wednesday, just days before a special holiday, provided quite a juxtaposition with news of an ominous plunge in startup tech investments.

Let's start with the bad news. Until this year, China's budding technology and pharmaceutical firms were awash in cash, as venture capital poured in domestically and from around the world.

"It's almost crazy if you're in China," Greg Scott, founder and chief executive officer of ChinaBio, told me in a phone interview two years ago. "All the VCs tell me there's just too much money chasing too few deals, so the VCs end up bidding against one another for the same opportunities."

It was a free-for-all bonanza.

Fast forward to Wednesday, when a report out from Bloomberg detailed just how much the Middle Kingdom's star has fallen. Venture funding so far this year is barely one-third of what it was at this point in 2019.

Three tech innovators, Bloomberg reported, either "postponed or pulled back on fundraising this year after venture capital pools dried up — the latest sign the country's remarkable tech startup boom is beginning to peter out."

The report said SenseTime Group, which it called the world's most valuable artificial intelligence startup company, was giving up funding targets for now and going on a "non-deal roadshow" after talks failed to raise about $2 billion.

Full Truck Alliance, backed by SoftBank (OTC: SFTBY) and Royole Corp both gave up on private rounds that had targeted about $1 billion each, Bloomberg said, citing anonymous sources.

China's technology giants including Alibaba (NYSE: BABA) and Tencent Holdings (OTC: TCEHY), two of the world's premier companies, along with countless others big and small, came of age during the tech boom of the past decade.

The country's fledgling pharma sector, which is starting to flourish with innovative new treatments for cancer and other diseases, also owes its existence to venture capital that until recently was flowing into China at rates higher than even the U.S.

All of this fueled one of the biggest and quickest runups in wealth ever seen. It created numerous billionaires in China, and the government has reaped the benefits with increased tax revenue.

A cool $11 billion of that went into the five-year construction of Beijing Daxing International Airport, where President Xi Jinping showed up this week to inaugurate what likely will become the busiest airport in the world. It's already the biggest and most modern.

Situated about 29 miles south of the city, the airport, with its 7.5 million-square-foot starfish-like terminal – the world's largest - is the picture of modern architecture and technology. Innovations eliminate the need for paper boarding passes, and the Global Times reported the airport has more than 400 self-service check-in kiosks, which means more than 80 percent of check-ins will be self-service.

"Wait times at the new airport will be greatly reduced by the use of facial recognition technology for self-service check-in and smart security checks," said Wang Hui, manager of Daxing's terminal management department, the South China Morning Post reported.

Louis Vuitton (OTC: LVMUY), Gucci and Bottega Veneta will be among the international shops and more than 70 restaurants, tea shops and coffee houses will operate at the airport, the Xinhua news agency reported,

The airport, a picture of opulence, opened just ahead of the National Day holiday, which next week will celebrate the 70th anniversary of Communist Party takeover and the founding of "modern China."

Beijing Daxing is expected to take a load off Beijing's existing Capital International Airport, which itself is the world's second-busiest, allowing for new routes to come into northern China. It aims to handle 45 million passengers a year by 2021, rising to 72 million by 2025.

China Southern (NYSE: ZNH), the nation's biggest airline, has gained 40 percent of the new slots at the airport. It will be among 16 airlines initially operating at Beijing Daxing. Others include the country's other major carriers – China Eastern (NYSE: CEA) and national flagship Air China (HK: 0753).

China has built up its transportation infrastructure in spectacular fashion over the past decade, with multibillion-dollar airports, thousands of miles of expressways, dozens of urban subways and a high-speed passenger rail system that is the envy of the world.

But while the nation is moving toward stamping out poverty, many rural areas remain quite poor and now the economy is undergoing its slowest growth in a generation. The country's buildup of debt, the trade war and a global slowdown are combining to erode China's growth prospects.

The drying up of venture capital funds is one result, as investors are losing confidence, at least in the short run. So which way will China go, longer term? Can the country continue its four-decade economic miracle?

This week's news reflects that uncertainty. Which event more accurately portrays China's future – the gleaming new airport or the loss of confidence in the country's innovative startup companies?

I'm betting on the airport.