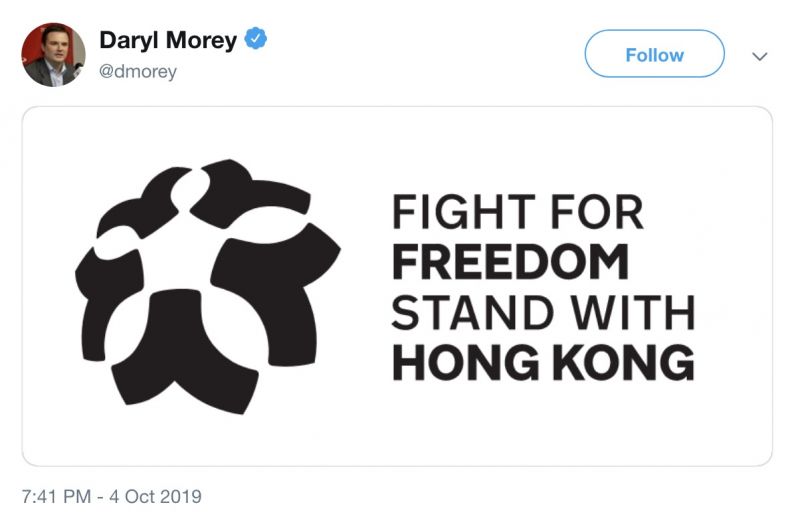 Houston Rockets General Manager Daryl Morey tweeted on Friday: "Fight for freedom, stand with Hong Kong," expressing support for the protesters. The move, at the time of China's 70th-anniversary, has prompted responses from some of its business partners, among which were China's biggest companies.

Last week, as China began its celebrations, it dealt with some of the most violent mass demonstrations in Hong Kong as protestors defied the Communist rule. Two shootings by police allegedly took place during the week, wounding teens age 14 and 18, as reported by the Independent. On Friday, Hong Kong chief executive Carrie Lam introduced a ban on face masks, leading to more violence in the streets. Clashes between police and activists have been becoming increasingly violent, as reported by local media szhk.com.

The leaders of the Rockets and NBA followed up with quick statements on the issue. Owner of the National Basketball Association's Houston Rockets, Tilman Fertitta, said that Morey's remarks could not represent Rockets, while Houston Rockets is not a political organization. NBA chief communications officer, Mike Bass, said in a statement: "We recognize that the views expressed by Houston Rockets General Manager Daryl Morey have deeply offended many of our friends and fans in China, which is regrettable, While Daryl has made it clear that his tweet does not represent the Rockets or the NBA," as reported by cbsnews.com and nbd.com.

Joseph Tsai, the executive vice-chairman of Alibaba, chairman of China's board of directors of NBA, owner of the Brooklyn Nets of the National Basketball Association, published an open letter to all NBA fans on his Facebook page about the remarks. In the letter, Tsai explained why the Chinese fans were so angry with Morey. "Supporting a separatist movement in a Chinese territory is one of those third-rail issues, not only for the Chinese government, but also for citizens of China," he wrote.

He added: "The one thing that is terribly misunderstood, and often ignored, by the Western press and those critical of China, is that 1.4 billion Chinese citizens stand united when it comes to the territorial integrity of China and the country's sovereignty over her homeland. This issue is non-negotiable," as reported by Reuters.

YOU MAY LIKE
Prev：China's Markets Cap at $7.7 Trillion in September, Second-Largest After U.S. Next：U.S. Blacklists Megvii, SenseTime Among 28 Chinese Entities on Foreign Policy Claims