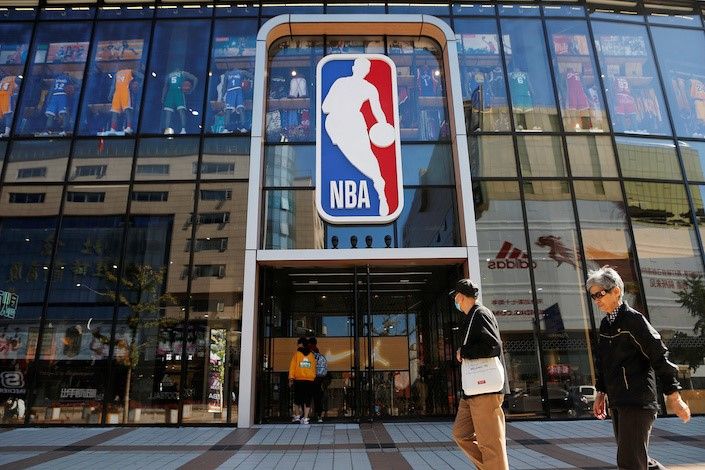 What started as a simple tweet quickly mushroomed this week into an international incident pitting the Chinese government against the National Basketball Association.

With recriminations, statements and clarifications flying every which way, the affair brought two things into clarity: how foreign businesses for years have toed a certain line to keep their China operations going and how Beijing, known for censorship within its own borders, is now trying to impose those constraints on speech to the outside world.

The incident also has illustrated the lack of cultural awareness often lurking just beneath the surface amid relations between the world's two economic powerhouses.

That ignited a quick and fierce backlash in China, and Morey soon deleted the tweet. No matter - the damage was done. China's sensitivity on the protests in Hong Kong, which are now in their fourth month and which Beijing calls "riots," is well-known.

State broadcaster CCTV and technology titan Tencent Holdings Ltd. (HK:0700) immediately decided not to televise or stream a pair of games in China between the Los Angeles Lakers and the Brooklyn Nets. The Brooklyn team was recently purchased by Alibaba Group Holding Ltd. (NYSE:BABA) co-founder Joe Tsai. For a while, it wasn't even clear the pre-season games, part of an annual tradition, would take place in Shanghai on Thursday and Shenzhen on Saturday. But they did go forth.

After initially offering an apology of sorts that drew heavy criticism, NBA Commissioner Adam Silver put out a more detailed and nuanced statement Tuesday in which he stood up for the bedrock American value of free speech while paying heed to the countries' cultural differences.

"We recognize that our two countries have different political systems and beliefs," Silver said. "And like many global brands, we bring our business to places with different political systems around the world. But for those who question our motivation, this is about far more than growing our business. Values of equality, respect and freedom of expression have long defined the NBA -- and will continue to do so."

Silver was threading the needle, and he received both praise and condemnation. Some angrily accused him of valuing the NBA's lucrative business in China over human rights while others said he struck just the right tone in defending U.S. values.

Much is at stake. Through various sponsorships and TV and streaming rights, the NBA is raking in an estimated half-billion dollars a year from its China operations.

China is the NBA's biggest market outside the U.S., and in the aftermath of the tweet and Silver's statement, most of the league's major sponsors in China – more than a dozen in all – started to bail. They included Ctrip.com International Ltd. (Nasdaq: CTRP), Luckin Coffee Inc. (Nasdaq:LK) and Changhong Meiling (SZ: 200521).

So too did smartphone maker Vivo and Anta Sports (HKEX: 2020) an athletic shoe company that has signed NBA stars as brand ambassadors.

This incident, because of the NBA's high profile, may have brought home China's penchant for controlling its image more than anything previously. But it's far from the first such occasion ensnaring American and other foreign companies that operate there.

U.S. airlines and travel companies have caught heat from Beijing for referring to Hong Kong and Taiwan as separate entities from China. Apple just this week was forced to withdraw an app from its online store that helped the protesters in Hong Kong locate the presence of police.

Coach and Versace are among the luxury brands to have clashed with Beijing this summer over fashion items that depicted Hong Kong and Taiwan as separate from China proper. In almost every past case, these companies have quickly bowed to China's wishes, seeking to avoid any potential for losing access to the country's vast consumer markets.

While China is known for keeping its own population in the dark on certain issues through intensive online censorship, its efforts to push those constraints outside of its borders are fairly new.

"This is core to (Chinese President) Xi Jinping's narrative about recapturing China's greatness," Elizabeth Economy, director for Asia studies at the Council on Foreign Relations, told the Washington Post.

"Whenever they see evidence that the international community is supporting Hong Kong or Taiwan as independent entities, they try to find ways to bring dissenting voices in line. They don't tolerate dissent on this topic inside China, and increasingly they are not tolerating dissent on these issues outside China."

The NBA, known for its progressive stances on issues, may be the first to stand up to this pressure. As part of his statement, Silver said, "The NBA will not put itself in a position of regulating what players, employees and team owners say or will not say on these issues."

So might the reaction from the creators of "South Park" after an episode of the popular TV show last week was yanked from Chinese platforms after it mocked the country's censorship.

Echoing criticism of the NBA after its initial apology, "South Park's" creators said with tongue firmly in cheek, "Like the NBA, we welcome the Chinese censors into our homes and into our hearts. We too love money more than freedom and democracy."

By Thursday, the Chinese government was moving "to tamp down public anger at the NBA as concerns spread in Beijing that the rhetoric was damaging China's interests and image around the world," the New York Times reported.

It seems that the Chinese leadership may be getting the message. For sure they will remain sensitive to criticism they consider meddlesome in their internal affairs, but they also are starting to realize that overly aggressive blowback can come back to haunt them.