A Harvard University representative, who attended the opening ceremony of the new center in Boston, said that education should surpass politics. 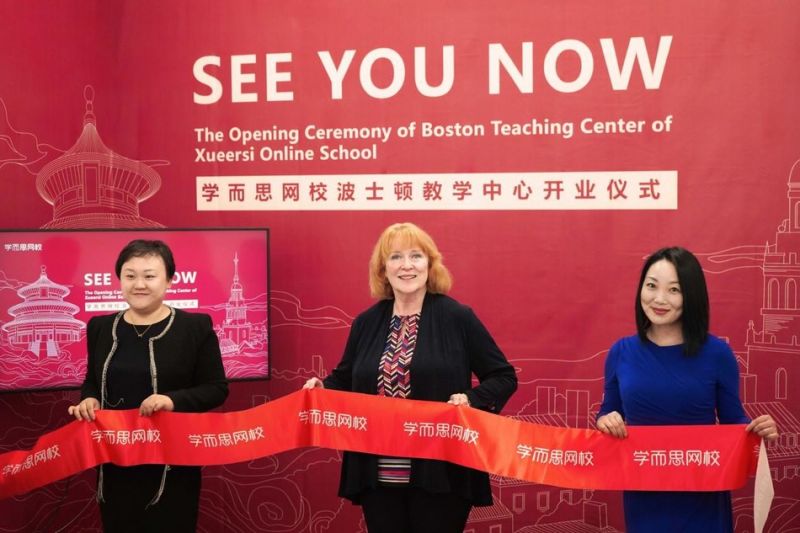 TAL Education Group's (NYSE: TAL) Xueersi Online School announced on Tuesday the opening of its teaching center in Boston, which has hired 11 Harvard University graduates to its new team.

The Boston Teaching Center, operational since July 2019, is Xueersi's first overseas location for recruitment and training that will live stream "an authentic American English classroom service," the company said in a statement today. Xueersi is a unit of TAL, a provider of K-12 after-school education services based in Beijing.

"Stimulating children's motivation to learn is more important than just imparting knowledge," Hazel Hao, the deputy head of Xueersi, said in the statement.

Mary Frazier-Davis, Associate Director at the Office of Career Services at Harvard University, attended the grand opening of the center.

In a phone call with CapitalWatch on Tuesday, Frazier-Davis expressed her hopes to continue a good relationship with Xueersi.

"We will continue to provide talents. We're very happy to help them to recruit our graduates," she said, adding: "We're really happy to facilitate any recruiting opportunities for our graduate students."

Frazier-Davis also said that Harvard University was not partnering with Xueersi directly as in a partnership.

Last month, TAL Education announced on its official WeChat account that its math training unit Think Academy has launched in Silicon Valley. The learning center is targeting American students in primary schools, sharing the same mission of "advancing education through science and technology" with Xueersi Boston center, according to an official statement.

A number of Chinese education providers are establishing or looking to establish centers in the United States, catering to the demand from Chinese students seeking a U.S. education. TAL's rival in China, Puxin Ltd. (NYSE: NEW), also aims to move forward with overseas expansion by providing study abroad programs to its current students in China.

The fate of Chinese students seeking U.S. education has been uncertain after the Trump administration imposed restrictions on certain student visas over the summer.

Last Friday, however, U.S. President Donald Trump said he welcomes Chinese students and will work to create equal opportunities, as he talked at a press conference following the trade discussions with China's Vice Premier Liu He in attendance.

"We have incredible talent coming in from China. They occupy a big space in our universities, and we want to keep it that way," Trump said.

Frazier-Davis told CapitalWatch, "The goal of helping students understand English and helping people connect is important, and that surpasses any politics."

The stock in TAL Education closed at $39.46 per American depositary share on Tuesday, up nearly 4%.

YOU MAY LIKE
Prev：ReneSola Soars 13% on Strong Revenue Guidance, Recent Sales Next：Aesthetic Medical Prices Shares Ahead of Downsized IPO