21Vianet will repurchase up to $20 million of its ADSs over the next 13 months.

The stock in 21Vianet Group Inc. (Nasdaq: VNET) closed nearly 8% higher on Wednesday, at $7.01 per American depositary share, after it announced a share buyback program.

The Beijing-based internet data company said in a statement today that it will repurchase up to $20 million of its ADSs over the next 13 months, to end on Dec. 31, 2020, according to the announcement.

"The number of ADSs repurchased and the timing of repurchases will depend on a number of factors, including, but not limited to, price, trading volume and general market conditions, along with 21Vianet's working capital requirements, general business conditions and other factors. 21Vianet's board of directors will review the share repurchase program periodically, and may modify, suspend or terminate the share repurchase program at any time," 21Vianet said.

Launched in 2009, 21Vianet provides cloud and business VPN services to enhance internet reliability, speed and security for its consumers. In China, it operates in about 30 cities and has a customer base of nearly 5,000, according to 21Vianet's official website.

The IDC market size in China is projected to increase to $35.4 billion in 2022, at a compound annual growth rate (CAGR) of  27.1% from 2017, 21Vianet said in its third quarter report, citing statistics from China Internet Datacenter Services. 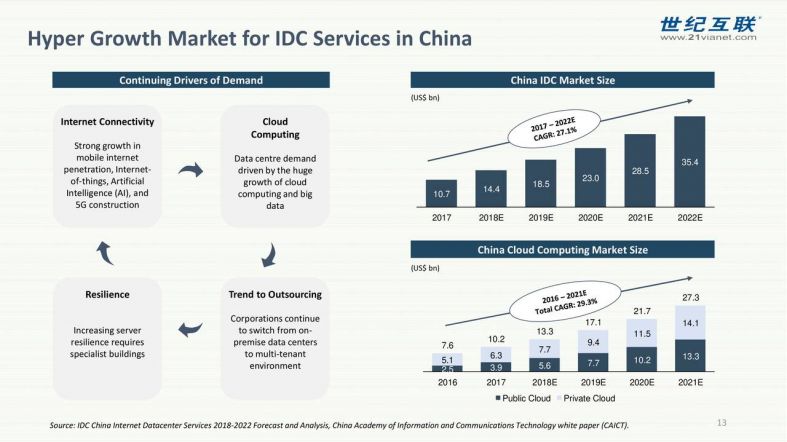