Genetron Holdings has filed raise growth capital in a U.S. IPO. The firm has grown quickly but that growth is decelerating.

Genetron Holdings (Nasdaq: GTH) has filed to raise gross proceeds of $100 million from a U.S. IPO, according to an F-1 registration statement.

GTH has grown but that growth is decelerating and the firm is producing increasing operating losses.

Beijing, China-based Genetron was founded in 2014 to develop precision oncology diagnosis, monitoring and research services in China, covering the full cycle of cancer care, according to Frost & Sullivan.

Management is headed by CEO and Director Sizhen Wang, who co-founded the firm and previously co-founded iTalk Global Communications, where he served as a Senior Vice President.

The firm's IVD products include a digital PCR system, a proprietary Genetron 3D biochip reading instrument, and an IDH1/TERT gene assays for glioma, which were approved in 2017, by China's National Medical Products Administration (NMPA), as well as the company's Genetron S5, which has also obtained an approval in November 2019 by the NMPA "or its provincial counterparts for clinical use."

Below is an overview graphic of the company's offerings: 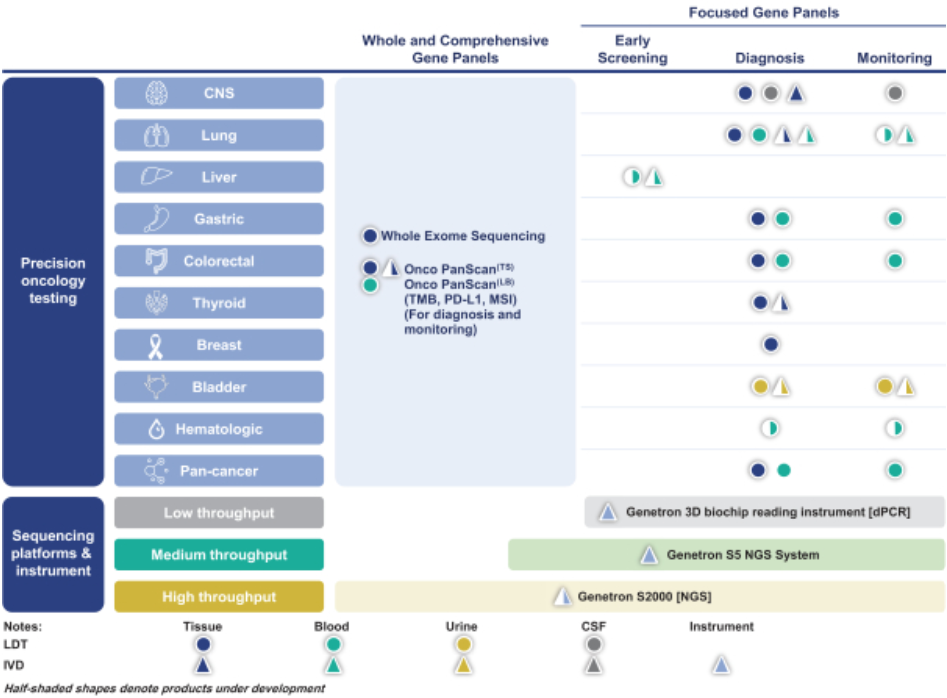 Additionally, Genetron has developed the HCCscreen early screening technology for liver cancer which "detects a combination of tumor-specific mutations in ctDNA and protein markers."

Below is an overview map of the company's direct sales coverage in China: 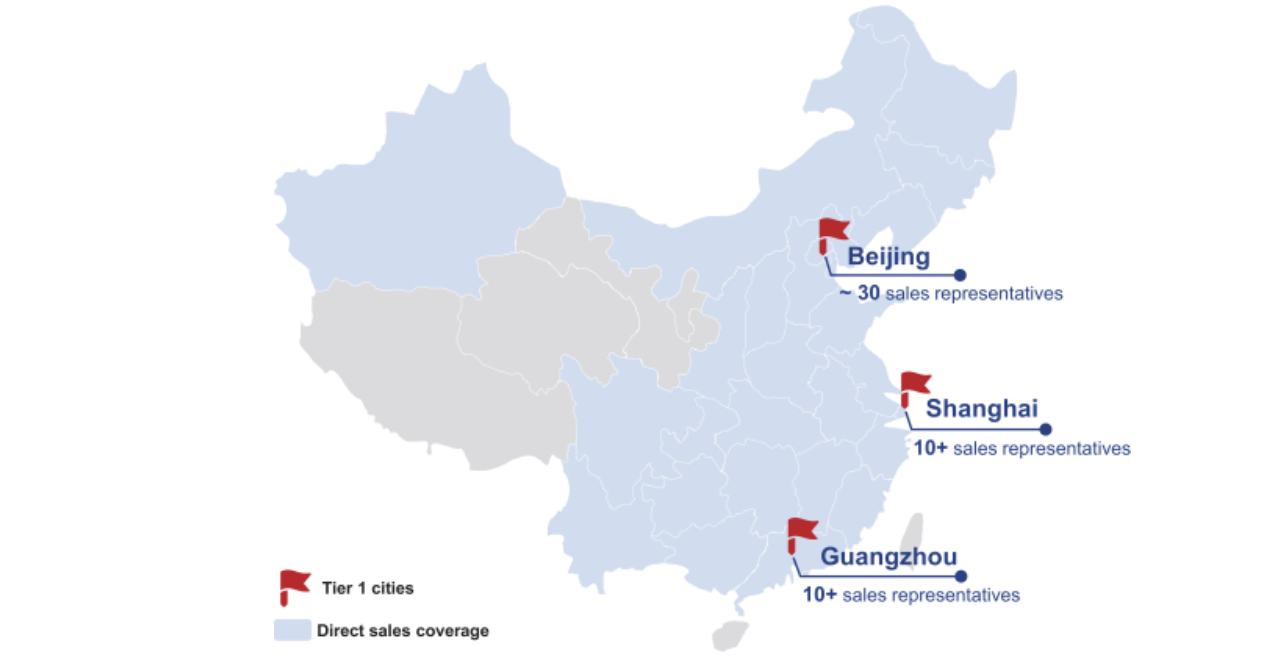 The firm has a dedicated sales and marketing team of about 270 employees that covers 415 hospitals in China, as well as an established external sales network of distributors, covering tier-three and tier-four cities in China.

Sales and marketing expenses as a percentage of revenue have been uneven but trending lower.

Average Revenue per Test has been dropping.

The main factors driving forecast market growth are rapid adoption of technology and escalating need for early diagnosis, due to an expanding healthcare market and a growing incidence of cancer.

The early diagnostics segment is projected to grow at the fastest rate of 8% during the period.

Major competitors that provide or are developing cancer diagnostics include:

GTH's recent financial results can be summarized as follows:

GTH has filed to raise $100 million in gross proceeds from an IPO of ADSs representing underlying ordinary shares, although the final figure will likely differ.

Per the firm's latest filing, the firm plans to use the net proceeds from the IPO as follows:

- 40% to further invest in technology and product development;

- 30% to expand our sales and marketing efforts; and

- 30% to meet working capital needs and other general corporate purposes.

Management's presentation of the company roadshow is not available.

Listed underwriters of the IPO are Credit Suisse and CICC.

GTH is attempting to obtain U.S. public market investment at a very challenging time in U.S. markets and for Chinese companies in particular.

There has been a large number of Chinese firms seeking investment on U.S. public capital markets in recent months.

Only a few firms have succeeded in completing an IPO transaction and most of those have performance challenges since IPO.

GTH's financials show the firm is growing revenue and gross profit, but at a decelerating rate of growth.

Sales and marketing expenses as a percentage of revenue are trending lower but are still high.

The company is producing large losses and cash burn, so I don't see a reasonable path to profitability any time soon.

The market opportunity for providing cancer diagnostic services in China is large and growing, with an aging population increasing demand through growing incidence of cancer.

The industry is promising and GTH has grown admirably, but the firm is producing increasing losses so its prospects for a successful IPO in the current market environment are challenging.