Will Robots Take Over China's Hospitals After COVID-19?

COVID-19 is powering an explosive growth in China's medical robots. But will "Made in China 2025" be a blessing for bots or a curse? 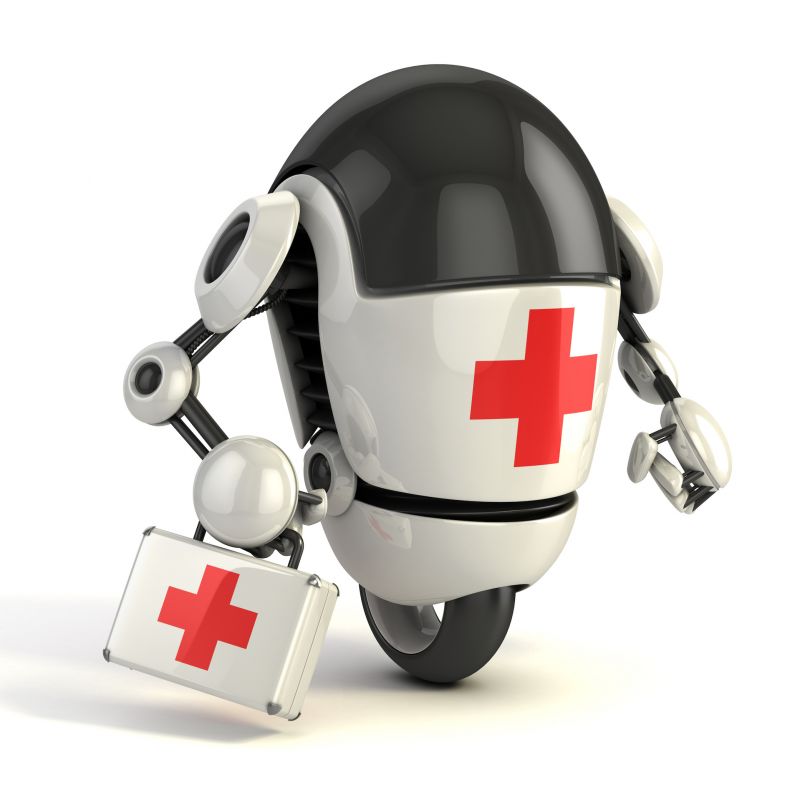 In the Wuhan Third Hospital, the epicenter of the COVID-19 outbreak, Xiaobai cruised through the narrow aisles to dole out medicines and meals, bypassing hazmat-suited professionals and facial masks-covered patients. Just as 1.4 billion Chinese were in different degrees of lockdown and tried to avoid human contact, this healthcare worker did not even wear a surgical mask. At 4.8 feet tall, traveling 1-2 feet per second, and armed with a laser camera head, this smart medical assistant robot, unlike the humans he helps, is not afraid of people. He has no fears, no feelings, and no family to worry about.

During an epidemic crisis, Xiaobai and his robotic brethren, come in very handy, indeed.

Human Healthcare Workers Not as Lucky

As of February 11, China's National Health Commission data shows, 3,019 healthcare workers nationwide had been infected with the novel coronavirus. In the Wuhan Seventh Hospital alone, two-thirds of the staff in the ICU had contracted the virus largely due to shortages of medical resources such as proper protective gear. Among the deceased were Dr. Li Wenliang, a 34-year-old ophthalmologist reprimanded by Chinese authorities after warning colleagues about the Sars-like virus, and Liu Zhiming, 50-year-old President of the Wuchang Hospital in Wuhan. Subsequently, Dr. Li's ophthalmological colleague Mei Zhongming also died of the infection, bringing the death toll of medics at the Wuhan Central Hospital to three and total infection count to more than 200.

The casualties among medical professionals drive home the heightened risk of cross-infections in medical facilities.

Due to these concerns, COVID-19 has effectively rebooted an interest in robotics because of its unique attributes in solving immobility challenges presented by lockdown and quarantine.  It's not a question of whether robots are smarter or more nimble.  Simply put, robots don't get sick with the virus and, with proper battery charges, are able to work around the clock.

As Kai-Fu Lee explains in his "AI Super-powers: China, Silicon Valley, and the New World Order," unlike algorithms capable of being transmitted globally without incremental costs to their creators, robotics demands a delicate interplay among mechanical engineering, perception AI and fine-motor manipulation.

While these are solvable challenges, they are not thus far being solved nearly the speed at which pure software is being built to handle--and therefore replace--white-collar cognitive tasks. For this reason, robots have tended to be too clumsy to have wide applications in hospitals.

But, necessity being the mother of invention, COVID-19 has started to change that.

A Sector Primed For Explosive Growth

China is the world's top market for robots, buying nearly as many as Europe and the Americas combined. China Economic Intelligence estimated that the size of the Chinese robot market would reach $8.68 billion in 2019, growing at an annual rate of 20.9% since 2014. Service robots accounted for $2.2 billion in sales. Approximately 31.7% of the service robots in China pertain to medical services.

Compared with fleets of medical robots working in North America and Europe, accounting for the world's 40% and 32% market respectively, China's domestic market has just started to take off and accounts for less than 5% of global market share.

In addition, dozens of robot companies compete in the rehabilitation and exoskeleton solutions space, such as Broadcare, Truking, Ai-Robot and Scream Technology.

Obviously China is not the only country mobilizing robots to combat the COVID-19 outbreak. After a Seattle man returned from Wuhan with coronavirus infection, the first reported case in the United States, a robot, equipped with a stethoscope, was part of the medical team helping to oversee his treatment at the Providence Regional Medical Center in Everett, Wa.

According to the Korea Biomedical Review, in response to the epidemic, Myongji Hospital in South Korea has introduced the RP-Lite V2 telemedicine robot produced and managed by Vici manufacturing company's InTouch Health system.

In the past, Chinese hospitals outsourced low-value-added human work, such as disinfection, garbage collection, and food delivery, so as to reduce hospital costs, improve efficiency and optimize hospital staffing. But a robot delivers four times the amount of work than its human counterpart. Thus, while far more expensive short term staff salaries, long-term robots are worth the cost for a logistics robot system that would last 20 years.

Robots on the Regular

Nowadays disinfection robots are becoming fixtures in medical institutions. Approximately 1,300 Chinese hospitals are each currently equipped with two or three robots. For instance, hundreds of TmiRob's more than 10 types of medical robots have been on duty in more than 130 large AAA-rated hospitals in China.VCBeat, a Website dedicated to digital health technologies, estimates that sales of auxiliary robots in China in 2020 will three to five times that of 2019; a conservative estimate, they believe.

In Hong Kong, 687 miles from Wuhan, robot Temi is the star of Hong Kong Children Hospital, Queen Elizabeth Hospital, Yan Chai Group, Sheng Kung Hui Group, and more than 50 nursing homes. Families restricted from visiting their parents during the epidemic rely on Temi to physically move to the elders' bedside and initiate a video conference.

Roy Lim, Vice President of Tung Hing Automation that invests in Temi and distributes the bots in Hong Kong and China, told CapitalWatch that sales have spiked since January. Armed with a touchscreen, Alexa technology, a built-in sound system and a tray for phone charges, Temi takes the temperature of visitors at the entrance of a senior center or a hospital and patrols in order to locate random people and measure their temperatures. Upon sensing an "object" reaching 38 Celsius or more, Temi will snap a picture and email it to the nurse. As one of Time Magazine's 100 Best Inventions of 2019, Temi is the creation of Robotemi, an Israeli company headquartered in New York with a manufacturing base in Shenzhen.

At a cost-effective price of $1,999 per unit, Temi relies on an in-house multi-layer LIDAR technology that would cost competitors (e.g., Pudubot, Yunji's Run) $7,000 per bot to procure from German or American producers. Temi's open Android SDK system also allows customers to customize with additional applications and connected sensors.

For example, with merely a set of Indoor Air Quality sensors attached, Temi can monitor the entire hospital's PM2.5, carbon dioxide, formaldehyde, temperature, humidity and even smoke particles in every room and report them in real-time to facility management.

Yet, despite robots' many edges over humans, challenges abound, particularly in smaller hospitals, with implementing robot-assisted treatment. For instance, some hospitals don't have the appropriate medical equipment that works with robots. Often, medical wards need proper designs and space markers to maximize the utility of robots.

During the current virus crisis, Shenzhen-based Broadcare dispatched its robots that administer configured intravenous injections to facilitate chemotherapy, including cutting ampoules, opening vials, shaking, disinfection, suction, injection and other operations.  These robots are also taking care of air purification, temperature control, and waste recycling and disposal. This reduces the risk of occupational injuries when medical personnel's movements are restricted by heavy protective gear.

But Zhang Jianwei, Professor of the Department of Informatics at the University of Hamburg and the world's leading expert on robotics, told me that currently the levels of robots' senses, movements, endurance, and flexibility are not sophisticated enough to support complex tasks such as intubation or modified rapid sequence induction which poses high infection risk to medical professionals.

So long as robots are confined to logistic delivery, mechanical transmission, and data analysis, the foreseeable future will be human-machine collaboration and not a full-scale robot hospital takeover.

Investing in the Future

Just as the virus is driving interest in robots, the rise in robot interest will continue to drive investors to the doorsteps of robot-makers as most of these companies have not tapped into the public market. But this is definitely an area that calls for patience and is by no means a way to make a fast buck.

To wit, Shenzhen's Zhongke Zhichuang has been biding its time after losing money for five consecutive years. It has received investments of 300 million yuan (approximately $43 million) as of 2019.

On February 25 Robotemi closed a fresh $15 million round of financing, with investments from Chinese VC firm Joy Capital and Alibaba's ex-CTO John Wu, bringing its total capital raise for Temi to $95 million.

The Chinese government has prioritized the development of "high-performance diagnosis and treatment equipment such as medical robots" as part of its "Made in China 2025" plan.

The initiative also sets a target for domestic industrial robot manufacturers to account for 50% of the Chinese market by 2020 and 70% by 2025.

According to the "2019 World Robotics—Industrial Robot Report" released by the International Federation of Robotics, as of 2018 Chinese robot manufacturers controlled 27% of the domestic market, with the remainder captured by foreign robot suppliers, including robots produced locally by international robot companies in China. There is still a way to go before reaching the stated 2020 objective.

The Chinese government will likely step up subsidies in the medical robots sector, which will be conducive to producing national champions.

However, there is always the danger that, like China's solar panel and driverless car initiatives, subsidy-induced overcapacity could lead to investment waste and industry dislocation.

It seems the only thing that can ruin the future of robots in China, both in healthcare and in other industries, are bad human choices.

YOU MAY LIKE
Prev：Will China Fulfill Its Commitment to the Private Sector After the COVID-19 Debacle? Next：OneSmart Hopes to Rival China's E-learning Players With Premium Services