Is this what America First looks like? While Beijing uses humanitarian, geopolitical and technological means to fight COVID-19, President Trump lies and blunders as China leads the way in a global crisis for the first time. 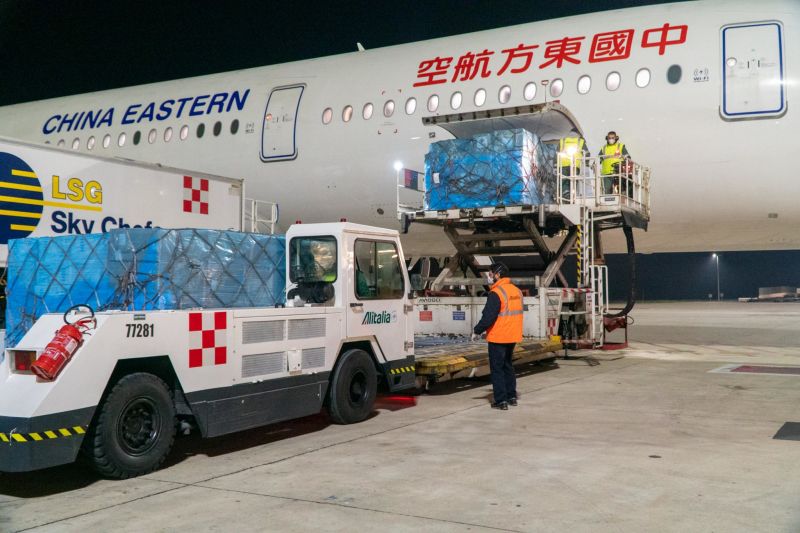 The inexorable shift of power from a waning U.S. to an ascendant China can be seen in the coronavirus pandemic on two fronts - geopolitical and technological.

While the U.S. and Europe hunker down to fight the virus battering their economies, the government and private companies in China are the ones coming to the rescue. As President Donald Trump blunders his way through lies, insults ("the Chinese virus") and a botched response to the fast-spreading coronavirus, China announces it's sending 2 million surgical masks, 200,000 advanced masks and 50,000 test kits to Europe.

Boy, could we use that now. The government is woefully short of testing equipment and recommends that only the sick wear masks – contrary to how successful countries in Asia have helped their people stamp out new infections. One reason: There are no N95 masks to be had. They are sold out everywhere. Just try to find one. Most are made in China and there aren't enough for American healthcare workers, let alone a public trying to stave off COVID-19.

Trump claims President Xi Jinping is his great friend, but would he actually ask China for help? Fat chance. He has made America great again, after all – or so he will tell you. His America-first policies and constant bluster preclude him from seeking help from the country he brands a cheater, one that can't be trusted.

But while Trump and his henchmen such as Secretary of State Mike Pompeo and Vice President Mike Pence belittle China, Jack Ma of Alibaba (Nasdaq: BABA; HKEX: 9988) offers to donate half a million tests and 1 million masks to the U.S. Whether it's to the Philippines, Iran, Italy or Spain, the government in Beijing is sending aid around the globe.

Just this week, the New York Times reports, it sent 2,000 rapid-diagnostic tests to Manila. China has also sent donations, masks and medical supplies and/or medical advisory teams to Pakistan, and announced this week it will answer Serbia's plea for help.

"The coronavirus is what will finally shift global power from the U.S. to China," Shaun Rein, who heads the Shanghai-based China Market Research Group, said in a LinkedIn post this week. "China has been sending help, respirators and masks to Iran for weeks and now Italy. It's sharing expertise and money globally."

With the virus now under control in China, Beijing is keen to leverage the crisis to bolster its standing in the world. Xi and Premier Li Keqiang this week touted calls from Spanish Prime Minister Pedro Sánchez and President of the European Commission Ursula von der Leyen. Sanchez and von der Leyen thanked China for its moral and material support while expressing hope for future cooperation – something Xinhua and China's other state-owned media were quick to report.

China clearly is filling a void created by the go-it-alone approach of Trump, who repeatedly has alienated top American allies in Europe since coming into office three years ago. Now Trump is abdicating U.S. leadership even in a global crisis.

"This could be the first major global crisis in decades without meaningful U.S. leadership and with significant Chinese leadership," Rush Doshi, director of the China Strategy Initiative at the Brookings Institution in Washington, told the New York Times.

He noted how it was just a few years ago that the United States led the fight against Ebola, helping stomp out a scary outbreak in Africa. Now it's China, after a wave of international criticism over its initial cover-up, winning praise around the world for its generosity in the global fight against COVID-19.

And it's not just humanitarian help. Chinese tech firms are providing access to data and experience viewed as crucial to the international fight against the virus, the South China Morning Post reported Wednesday. It noted that the Jack Ma Foundation and Alibaba Foundation are sharing clinical experience from frontline medical workers with global medical institutions in the form of a digital handbook.

The medical staff are from First Affiliated Hospital and Zhejiang University School of Medicine, which together admitted 104 patients confirmed with coronavirus over a seven-week span. The hospital has so far been able to handle the health crisis without a single medical staff infection, missed diagnosis or patient death, the Hong Kong newspaper noted.

On another front, Chinese tech giant Tencent Holdings (OTC: TCEHY; HKEX: 0700) has created a bilingual app called WeDoctor, which connects specialists around the world to Chinese doctors, the official Twitter account of the Chinese Mission to the United Nations announced this week.

Perhaps even more importantly, China is using its prowess in artificial intelligence to boost its own response to the coronavirus. AI, considered the key technology for the 21st century, has been pushed by the authorities in Beijing, and China holds the lead over the U.S. in several categories of AI. The country's ability to capture huge amounts of data on its people doesn't hurt, either.

In 2017, Tencent was tasked with leading the development of computer vision for medical diagnosis when China announced its initial big stab at tackling AI, the SCMP said. Tencent launched an AI medical imaging platform capable of diagnosing a wide array of illnesses, along with a cloud-based system for sharing and collaboration between domestic health care AI companies.

The same year, the SCMP report said, a robot developed by iFlyTek (SZ: 002230) passed China's written national qualification exam for doctors, in what was hailed as a game changer for the country's strained healthcare system.

In other words, China is using its emerging capabilities in AI not only to help its apparently successful containment of the coronavirus but to learn from the experience and promote that expertise in the general marketplace.

That is helping China in its campaign to make its people and the world forget how it initially bungled its own response, punishing doctors who sounded early warnings.

"I don't know and now I don't care," Michele Geraci, a former undersecretary in the Italian economic development ministry, told the New York Times when asked whether the assistance reflected China's geopolitical ambitions as much as humanitarian concerns.

He said the urgent issue was to provide aid to save lives. "If somebody is worried China is doing too much, the gap is open to other countries," he said. "This is what other countries should do."

It's what the U.S. has always stepped up to do – until now. While the Trump administration stumbles and tries to cover for itself with little coherent strategy, U.S. cases are soaring. China, on the other hand, has stopped the coronavirus's spread at 81,000 cases and is helping other countries while promoting its emerging technology.

YOU MAY LIKE
Prev：iFLYTEK’s Journey to the Core of Business Ecosystem | iAsk Leaders Next：Xi Zhinong: There Is No Excuse for Wasting Wildlife | iAsk Public Welfare Leaders