Fed Stays Steady While BoJ Expands the Stimulus. What About Gold? 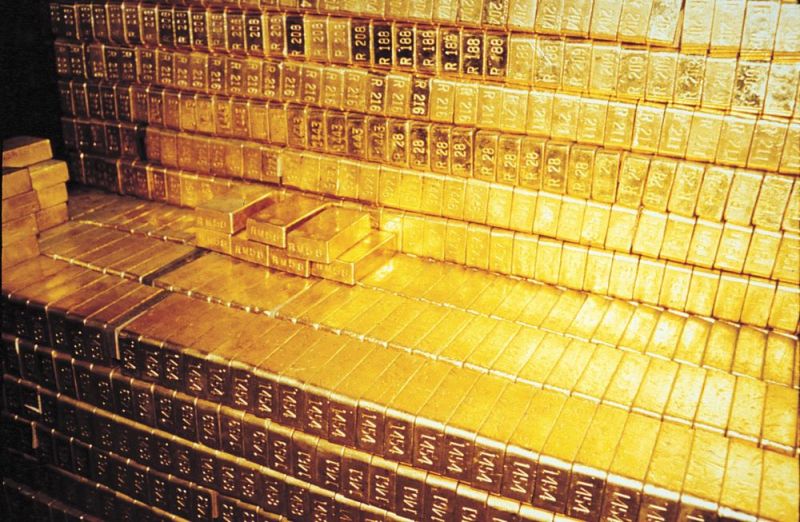 This week is hot for central banking: the Bank of Japan and the Federal Reserve have already held their monetary policy meetings. The former expanded its monetary policy easing, while the Fed remained steady. What do all these actions imply for the gold market?

This week is hot in the world of central banking: the Bank of Japan and the Federal Reserve have already held their monetary policy meetings, while the statement of the European Central Bank is scheduled for today.

Let's start from the BoJ. On Monday, the central bank of Japan expanded monetary stimulus, as the pandemic pain worsens. The BoJ sharply downgraded its economic forecast and now expects that the real GDP will decrease in fiscal year of 2020 between -5.0 to -3.0 percent, down from +0.8 to +1.1 percent forecasted in January. The central bank kept interest rates unchanged, but it loosened its monetary policy in two significant ways. First, it will nearly triple the maximum amount of additional purchases of corporate bonds and commercial paper. The expanded quantitative easing should theoretically be supportive for gold, but it boosted the Japanese stock market, and it could weaken the yen against the US dollar – the alternative for gold as a safe-haven asset.

Second, the BoJ removed the upper limit of an annual pace of 80 trillion yen and announced the unlimited purchases of government bonds: "The Bank will purchase a necessary amount of JGBs without setting an upper limit so that 10-year JGB yields will remain at around zero percent". It is in a way just a symbolic move, as the BoJ has only purchased less than 20 trillion yen per year, but it shows that the central bank is really determined to control the yield curve. Welcome financial repression, the true-and-tried gold's friend.

As the Bank of Japan is the vanguard of the unconventional monetary policy, investors should not be surprised when they see in the future that the ECB and the Fed also control the yield curve. Actually, this is what they already do, at least partially. So please be prepared that the ultra low bond yields could stay with us for long. This would be good news for the gold bulls, as the yellow metal shines the brightest in the environment of low real interest rates.

Yesterday, the FOMC published its April policy statement. The US central bank held its monetary stance steady, i.e., it kept the federal funds rate at unchanged level close to zero and it did not alter its unconventional stimulus programs. The Fed reiterated that it was "committed to using its full range of tools to support the U.S. economy in this challenging time."

At his press conference, Powell acknowledged that the US entered a deep recession. He said:

It is clear that the effects on the economy are severe. Millions of workers are losing their jobs. Next week's jobs report is expected to show that the unemployment rate, which was at 50-year lows just two months ago, has surged into double-digits. Household spending has plummeted (…) Manufacturing output fell sharply in March and is likely to drop even more rapidly this month as many factories have temporarily closed. Overall, economic activity will likely drop at an unprecedented rate in the second quarter.

Let's stress here a few things from the press conference. First, Powell said that the Fed will use its lending powers "forcefully, proactively, and aggressively until we are confident that we are solidly on the road to recovery". This is very strong, dovish rhetoric. It means that the ZIRP will not disappear anytime soon. Given the history of sluggish normalization of the monetary policy in the aftermath of the Great Recession, the very low interest rates and the enormous Fed's balance sheet will stay with us for years. As the chart below shows, the Fed's balance sheet has increased almost $3 trillion in 2020! This is good news for the yellow metal. 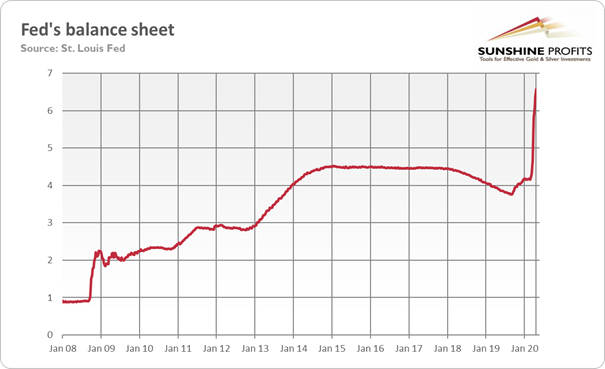 Second, Powell admitted that it was practically impossible to predict when the economy starts to improve. Importantly, he acknowledged that even when social distancing rules are eased, people could still worry and, thus, we won't go back to pre-coronavirus levels for some time, especially that there is a risk of viral resurgence. All this means that investors believe that the US will recover faster than both the economists and the Fed think. We are afraid that such expectations are too optimistic. If investors adjust them, we could see stock prices to decline – then, gold prices could initially fall as well due to the liquidity-driven selloff, but they should rally later due to the safe-haven demand.

Third, it's important not only what Powell said but also what he did not say. Importantly, the Fed did not suggest more dramatic measures such as negative interest rates or buying stocks. The fact that the Fed does not think right now about new moves, is bad for gold. However, the realization that the US central bank is not going to buy equities, could halt the current rally in the stock market, which could also affect the gold market. Over at Stock Trading Alerts, we're keenly feeling for the winds of change – right now though, we're profiting on the stock upswing.

The latest FOMC meeting did not bring anything unexpected. Powell did not light up the fireworks. However, we still learned a few important things. The most important takeaway is that the Fed's unconventional monetary policy and zero interest rates will not disappear anytime soon. It remained steady in April, but the Fed maintains its dovish bias, which should support gold prices in the long run. After all, in the current economic environment of high indebtedness, elevated stock valuations, enormous uncertainty, low real interest rates and rising money supply, more and more investors are likely to add some gold into their portfolios.