30 Million of Americans Applied for Unemployment Benefits. Should They Buy Gold?

What does it all mean for the gold market? 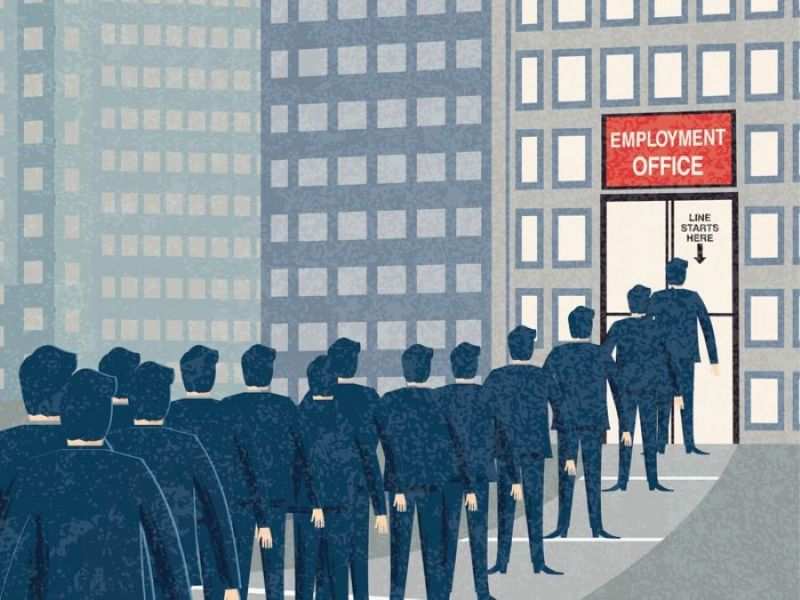 Just like the BoJ last week, the ECB also expanded its monetary policy easing. Meanwhile across the pond, more than 30 million of Americans applied for the unemployment benefit. What does it all means for the gold market?

Following the statements of the Bank of Japan and the Federal Reserve, the European Central Bank announced on Thursday its newest monetary policy decisions. Although the central bank of the Eurozone kept its main policy rates unchanged, it expanded its monetary policy stimulus in a few ways. First, the ECB eased conditions on the targeted longer-term refinancing operations (TLTRO III) during the period from June 2020 to June 2021 to 50 basis points below the average interest rate on the Eurosystem's main refinancing operations prevailing over the same period. It implies that the rate in TLTRO III can now be as low as minus one percent. In plain English, it means that the ECB loosened the refinancing conditions for commercial banks, paying banks to grant loans.

Second, the ECB introduced a new series of non-targeted pandemic emergency longer-term refinancing operations (PELTROs). These operations will be conducted to support liquidity conditions in the euro area financial system. So, it seems that the TLTRO is not enough – in other words, the liquidity conditions in the euro area were rather poor as the central bank decided to introduce new refinancing operations. Well, we said many times that the euro area is very fragile and that the European banks are not healthy. This fragility is an important upside risk for gold, although the yellow metal prefers stronger, not weaker, euro versus the dollar.

Christine Lagarde, the ECB President, admitted during her press conference that the euro area is facing an economic contraction of a magnitude and speed that are unprecedented in peacetime. The real GDP for the euro area dropped 3.8 percent, quarter on quarter, in Q1 2020, although it was only partially affected by the spread of the coronavirus. So, you can imagine that Q2 will be much worse. The ECB's scenarios suggest that the GDP could fall by between 5 and 12 percent this year. What a wide range! It basically means that the economy is in the toilet, but nobody knows how much. But what is important, is that the ECB does not see a V-shaped recovery, even in the mild scenario. As you can see in the chart below, the central bank forecasts a U-shaped recession with the real GDP surpassing the pre-pandemic level in 2021 at the earliest.

US Economy Is Not Much Better

The US economy performed better than the Eurozone, but the drop in the GDP in the first quarter of 2020 was still the largest since the Great Recession. According to the advance estimate, the real GDP decreased at an annualized rate of 4.8 percent in Q1 2020, or 1.2 percent quarter to quarter, as the chart below shows. Meanwhile, personal income fell 2 percent in March, while consumer spending slumped a record 7.5 percent last month. However, the pandemic came later to the US, so the second quarter is likely to be much worse. 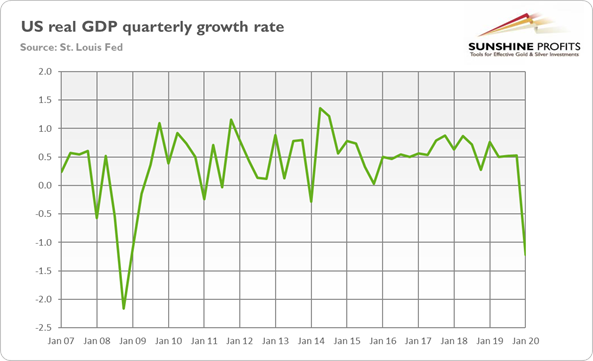 Another important difference between the euro are and the US is that the labor protection is weaker in the New World. Although labor flexibility is generally good, the current scale of unemployment in the US is striking. As the chart below shows, 3.8 million of Americans applied for the unemployment benefit in the week between April 18 and April 25. 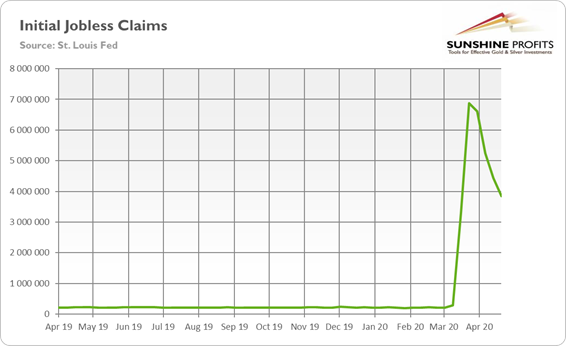 It means that since the pandemic, more than 30 million of people went into unemployment, the highest number since the Great Depression. Actually, the unprecedented surge in layoffs means that the unemployment rate could already be higher than during the Great Depression if we assume no dropouts from the labor market. In reality, of course, the unemployment rate will be lower, but this not really good news, as it means that some people just withdrew from the labor market and that they even do not seek a new job.

What does it all mean for the gold market? Well, the yellow metal gained almost 6 percent in April, marking the best month in four years, amid the coronavirus crisis intensifying and more monetary easing from central banks. We think that first, the weaker economic recovery than many investors and analysts expect, and second, the resulting unprecedented monetary stimulus provided by the Bank of Japan, the ECB and the Fed is likely to increase future demand for gold. Tailwind for higher prices.