A Moment for Music Streaming Stocks

The radio sector isn't dead, but it's hurting. And Covid-19 isn't helping.

Streaming killed the radio star long ago. People have incorporated streaming music into their daily lives. From the gym to the subway car, everyone tunes out but tuning in to music. With everyone forced to stay home, the question was whether music streaming would increase or decrease during the quarantine.

For the full year, 2019 revenues from streaming services rose around 20% to $8.8 billion, According to the RIAA, that represents 80% of all recorded music revenues.

According to a survey posted by Statista in 2017, featuring 1,900 respondents, the most popular destination to listen to music was at home. The study revealed that 84% of Gen Z individuals aged 18-24, reported listening to music at home. Although 82% of the age group reported listening to music in the car, people are still more likely to shift towards listening at home now if they hadn't been before Covid-19 outbreak. That's great news for music streamers. 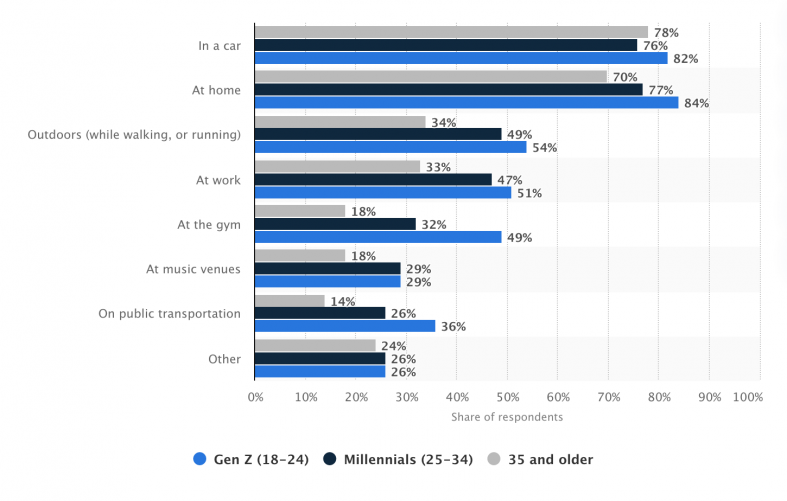 Radio stations, however, have not been so lucky. At home, no one listens to the radio; the radio industry depends a great deal on people tuning in while driving their cars.  Let's take a closer look at some of these streaming stocks:

First, we start with one of the most popular streaming services Spotify Technology S.A., (NYSE: SPOT) which offers both music and podcasts. Spotify is an obvious choice for consumers with a premium music subscription at only $9.99 a month. The deal is even sweeter for college students, which can get Hulu and Showtime subscriptions with Spotify premium for $4.99 per month.

Not surprisingly, Spotify was not significantly impacted in the first quarter, reporting in the three months through March that its global premium users hit 100 million, up 32% year-over-year. Meanwhile, Spotify recorded a total of 217 million monthly active users worldwide. However, the Swedish-based company anticipates some impact going forward. In the second quarter, Spotify expects to generate revenues in the range of $8.3 billion to $8.73 billion. That's down from the $8.76 billion and $9.19 billion it had initially estimated.

One of Spotify's biggest competitors is Apple Inc.'s (Nasdaq: AAPL) music streaming operations. Like Spotify, Apple offers its premium for $9.99 and a student plan for $4.99 a month. The tech giant does not offer Hulu and Showtime to students under its plan but does offer a $99.99 annual subscription to users, making the two companies price competitive.

Apple, however, is a hold for now at $300 per share. For music, Spotify is a safer bet, as Apple is more focused on manufacturing its smartphones and computers. However, the stock is certainly one to watch, as consumers with iPhones may prefer to stick with the same manufacturer for music. Also, Apple did not provide guidance going forward, which certainly didn't please investors, but the company is by no means alone in foregoing guidance during this crisis—but at these levels, there is no rush to buy the stock.

YouTube Far Behind Spotify and Apple, but has Potential

Another in the market is YouTube music, which is owned by Alphabet Inc.'s (Nasdaq: GOOGL) Google. While its monthly premium price is similar to Apple and Spotify, YouTube is far behind the two music streaming giants. Earlier this year, Alphabet reported its YouTube premium and YouTube Music together had 20 million paid subscribers.

However, there is certainly some upside, as Google said earlier this year that its video-sharing platform generated $15.15 billion in ad revenue in 2019.

In a blog post earlier this year, Susan Wojcicki, the CEO of YouTube said the company's goal in 2020 is to expand its partnership with the music industry, media companies, creators, and advertisers. As for those deciding whether to buy, Alphabet looked like a good bet in March when the stock fell to a 52 week low near $1,000 per share. Right now, the stock is a hold at $1400 per share, but continue to monitor as there is certainly potential with YouTube Music. On top of Google and YouTube, Alphabet also provides Android products and hardware devices.

Uncertainties Lie Ahead for Sirius

As we noted before, music streamers may be offset slightly with the impact of Covid-19, but it's a little more complicated with radio producers. With fewer people on the road, the path ahead is fraught with challenges.

Luckily for the company, Sirius XM Holdings Inc (Nasdaq: SIRI) operates both streaming services and live radio. While the New York-based company is known mainly for its satellite radio services, it acquired the one-time most popular music streaming platform Pandora for $3.5 billion in 2018.

In the first quarter, Pandora had 60.9 million monthly active users (MAU), down from 66 million in the same period in 2019. Since the end of 2016, Pandora has continued to watch its MAU's decline. 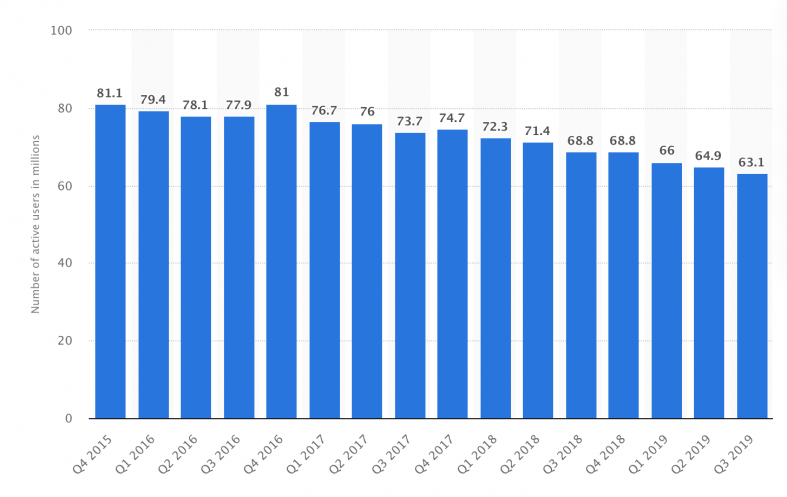 As for the company, Sirius lost 143,000 net subscribers in the first quarter. In addition, Sirius suspended its stock repurchases in March and has withdrawn its full-year 2020 guidance for self-pay net subscriber additions, revenue adjusted EBITDA, and free cash flow.

The good news for the company is it came off a strong first quarter despite uncertainties that lie ahead. The company was able to generate revenue of $1.95 billion, up 12% year-over-year on a net income of $293 million.

Right now the stock is a hold, as shares are down 20% YTD.  If you're a shareholder be prepared to wait a while before seeing Sirius pick up momentum. And if Sirius fails to renew popular radio personality Howard Stern's contract by the end of the year, the company will undoubtedly lose many subscribers.

Another that player in the radio sector whose future is uncertain is iHeartMedia, Inc. (NYSE: IHRT) Unlike Sirius, IHRT, which has more than 850 live broadcast stations in over 160 markets nationwide, has been hit hard by the spread on the pandemic. In the first quarter, revenues fell to $780.6 million, down 2% year-over-year on a net loss of $1.69 billion.

The radio giant has had a challenging last couple of years. The company went from filing Chapter 11 bankruptcy to becoming a publicly-traded company in July 2019. Now, the unexpected Covid-19 has hit the company, forcing it to implement cost-controlled measures.

In April, IHRT unveiled an additional $200 million savings on top of the $50 million it announced earlier in the year. The measures include pay reductions for senior management, furloughs for non-essential staff, and a suspension on 401(k) matching,

Going forward, IHRT will be a tough buy for investors, as the company had approximately $5.3 billion in net debt through March. While IHRT said more than 90% of long-term debt will not mature until 2026 or later, the Covid-19 crisis just adds another uncertainty to a struggling company.  Even with shares down nearly 62% YTD, now may be a good time to sell stock in IHRT.

The Radio Isn't a Dying Sector

While streaming music is the preferred route for consumers, radio stations are dead. According to research by Statista, public radio station revenue has increased from approximately $624 million in 2009 to more than $900 million in 2019. The report said that Americans averaged 106 minutes of daily radio listening in 2018. Radio listening is far from disappearing, but it just isn't the multibillion-dollar industry that streaming has become.

To be able to sustain the most success as possible, those operating primarily in the radio segment need to adapt—and quickly. Both IHRT and Sirius offer streaming through apps and online. Sirius has also made efforts to try and earn new subscribers during the pandemic, as its 300-plus channel streaming service is accessible at no charge until May 31. Leveraging both their radio broadcasting and streaming capabilities against their rivals will be key to their continued success.

The average American spends 18 days a year driving, or just eight hours and 22 minutes per week, according to a survey conducted by Cooper Tire. When Americans return to the road, the hope for the industry is that they will return to the radio.

Sirius Needs to Turn Pandora Around

For Sirius's Pandora, it'll have to find a way to turn around the billion-dollar acquisition now offering diminishing returns.

"They missed a mark," Gene Munster, a tech analyst, and managing partner at Loup Ventures said.

He added, "When Pandora was just ramping, it was thought that radio was the future of how most people wanted to interact with music. And what Spotify did was add controls and sharing playlists, and they just missed that."

Spotify is the safest buy going forward, as it's the largest subscription music streaming service. However, it'll be interesting to see if Apple can make drastic improvements to its music platform that catches Spotify by surprise. Apple is after all one of the largest tech brands. For international plays, China's Tencent Music Entertainment Group (NYSE: TME) reported it had more than 800 million monthly active users across its platforms in the second quarter of 2018, with 23.3 million paid subscribers. Tencent is a stock to watch.

For now, shareholders and consumers just have to lie back in their beds and listen to their favorite songs on whichever platform they use. Soon, they will be back in cars, trains, and planes—that might turn things around for some struggling music stocks.

YOU MAY LIKE
Prev：China Gets $15 Billion Foreign Investment in Q1, Hopeful on Trade Deal Next：Tencent-Backed Yeahka Refiles for Hong Kong IPO