Just when it appeared that the bears will get a third consecutive daily close lower, stocks rebounded from the 50% Fibonacci retracement. 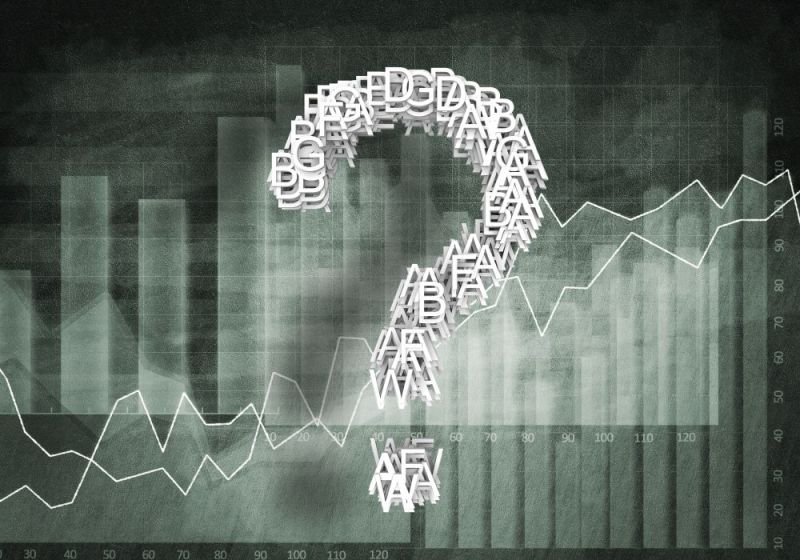 Just when it appeared that the bears will get a third consecutive daily close lower, stocks rebounded from the 50% Fibonacci retracement. Having stabilized and added to the intraday gains within the final hour before the closing bell, have the sellers been banished now?

That's unlikely in our view. 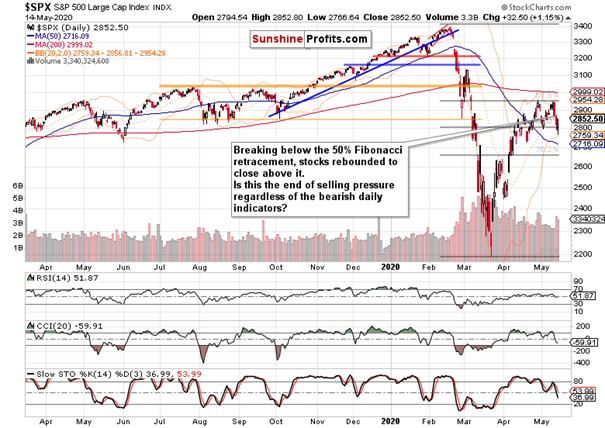 Stocks opened with a bearish gap, going deeper below the 50% Fibonacci retracement. The bulls stepped in though, striving to repair the daily price damage.

This is how we have summarized their efforts some 75 minutes before the closing bell in our latest intraday Stock Trading Alert that day:

Healthcare (XLV ETF), financials (XLF ETF) and consumer discretionaries (XLY ETF) are among the best performing sectors today – but still, they have only retraced certain parts of their yesterday's downswing. Technology (XLK ETF) hasn't managed to do that (Amazon, Microsoft, Apple and Alphabet are not today's shining stars) while the stealth bull trio (energy, materials and industrials) continue lagging behind in their retracing attempts too.

But the stock index is still attempting to move higher, regardless of not having the key upswing drivers aligned behind the attempt. Smallcaps (IWM ETF) are also performing less than strongly, trading with a sizable upper knot and well below yesterday's closing prices. This subtly points to the bear takedown risks being still very much present in the market.

Okay, these are the clues for the 500-strong index. But we are trading the index and have to respect its swing structure with the potential overshoots. And it tells us that should stocks (driven by the tech comeback later today) play catch-up and take prices above 2870, the risk of further gains in the lead up to tomorrow's retail data would be there. That's true regardless of the incoming data likely to be worthy of a horror show, and the market selling off in its wake.

The mentioned trio (healthcare, financials and consumer discretionaries) have indeed added to their intraday gains in the final hour of trading – during which neither technology (XLK ETF) nor small caps (IWM ETF) have exactly outshined them.

Tellingly, our overnight target of 2870 that would have the power to flip the very short-term outlook bullish, hasn't been reached by a long shot. And as we see the futures having rolled over to trade at around 2820, we're getting a real-time confirmation of the yesterday-presented bearish outlook for stocks – both in the regular Stock Trading Alert and its intraday follow-ups.

On top, today's bearish plunge comes in anticipation of the upcoming retail sales figures, providing us with one more hint of which way stocks are likely to trade after the US market open. In short, expect the bears to reappear.

How did the credit markets perform during yesterday's session exactly? While high yield corporate debt (HYG ETF) refused to go much lower or higher since yesterday's open, it's relative stabilization on a daily basis seems to have ignited stocks more than justified. A bridge too far for the stock bulls? Looking at the shape of things, probably. 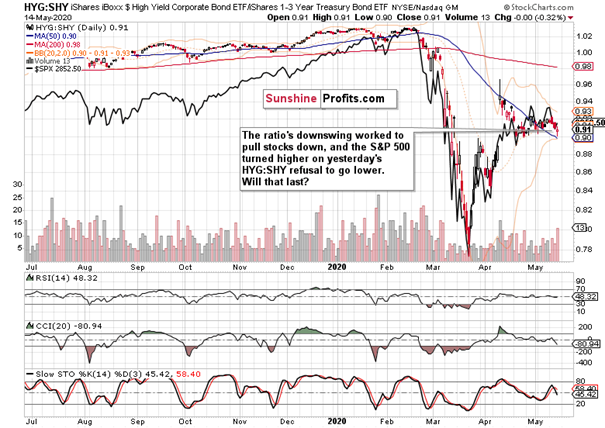 The high yield corporate bonds to short-term Treasuries ratio (HYG:SHY) also hints at the prevailing bearish overtones. This ratio too is well-positioned to exert downside pressure on the overlaid S&P 500 chart (the black line). 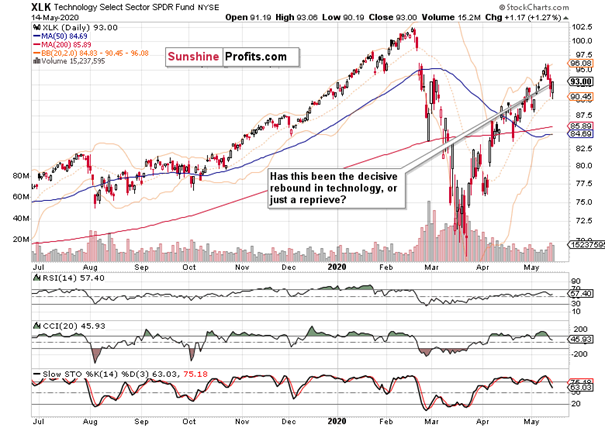 Technology's volume on the upswing didn't match or overcome that of the preceding downswing. Is the sector likely to catch up with more upside price action later today? Judged by the daily indicators, that's unlikely.

The prospect of bearish upcoming performance in the short-term will serve to put pressure on the whole index – just as the performance of the stealth bull market trio will, and healthcare (XLV ETF), consumer discretionaries (XLY ETF) or financials (XLF ETF) can't be counted on to save the S&P 500's day.

Materials (XLB ETF) were the strongest ones yesterday, with energy (XLE ETF) and industrials (XLI ETF) lagging behind the attempts to retrace Wednesday's declines. This doesn't bode well for the the index as such, and their upcoming opening prices and performance later in the day would likely confirm that. 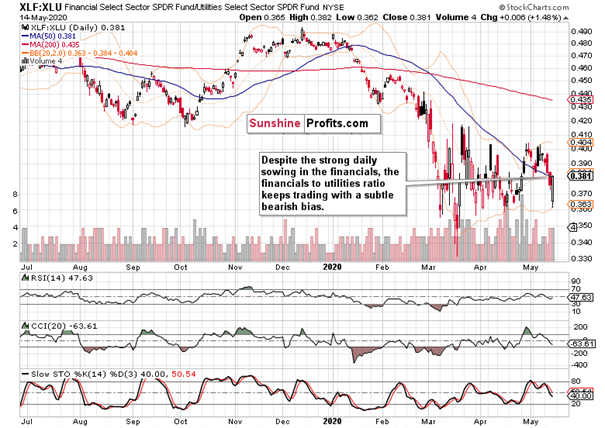 Yes, financials scored an upswing yesterday, but that didn't flip the financials to utilities ratio (XLF:XLU) over to bullish. Coupled with its daily indicators‘ posture, this leading ratio maintains its bearish short-term outlook. And so does the consumer discretionaries to consumer staples ratio (XLY:XLP). After retracing all the downswing since its February highs, this leading metric appears to be rolling over to the downside.

And we fully expect the upcoming retail data to put pressure on yesterday's star performers, the discretionaries (XLY ETF). There is no other logical conclusion to be made as the V-shaped recovery is increasingly being recognized by the market place for what it truly is – a pipe dream.

Q: the S&P is showing strong support at the 2720 range where you have put the target. However the Dow shows support at 23100 (which was breached today). How do you know which one to go by?

A: Yes, the 2720 area is a meaningful S&P 500 support zone as both the 50-day moving average and the late April lows are located there. The other indices such as Dow Jones Industrial Average or Russell 2000 give us valuable clues, but foremost, we have to focus on the S&P 500 itself.

Applied to the current situation, we see that DJIA rebound yesterday mirrored that of the S&P 500 – also in terms of volume relative to the preceding daily downswing. In latter stages of stock advances (and as the repeated showing at the 61.8% Fibonacci retracement shows, we think that's a true description of the S&P 500 status), it's not unusual to see broader-based indices (S&P 500) hold up ground better than the narrower ones (DJIA).

As for small caps though, that's a different story. The Russell 2000 (IWM ETF) hasn't performed as strongly as the S&P 500 did on the rebound (i.e. the backbone of US economy hasn't been confirming the advance by leading higher relatively), which is yet another bearish piece to the puzzle. And odds are the unfolding puzzle will be resolved with another downswing before too long.

Despite the bullish finish to yesterday's trading, the buyers don't appear to be as strong as they project themselves to be. Unless we see a turnaround in the credit markets and renewed vigor among the formerly leading S&P 500 sectors and their ratios, Thursday's session is likely to mark a temporary reprieve only. Should the HYG ETF break below the late April lows, the bearish case would get a new lease of life. Combining the technical and fundamental developments (the increased reflection of serious downside risks and overly rose-tinted glasses of the reopening and V-shaped recovery saga), the sellers are holding the upper hand currently. Our profitable open short position remains amply justified as stocks are likely to break down below the 50% Fibonacci retracement. The increasing US-China trade deal tensions only serve to add fuel to the fire – S&P 500 downswing catalyst.