Will Havoc in the Labor Market and Disinflation Make Gold Shine?

There is true havoc in the US labor market, while inflation rate has declined. What does it mean for the gold market? 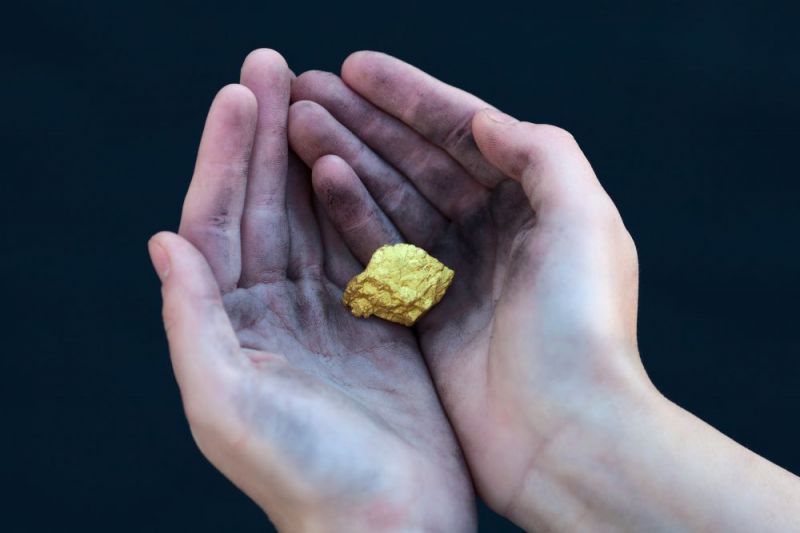 There is true havoc in the US labor market, while the inflation rate has declined. What does it mean for the gold market?

True Pandemonium Emerges in the US Labor Market

This week was full of economic data. Let's analyze them, starting, as usual, from the initial jobless claims, which became one of the most carefully studied indicators during the coronavirus crisis. As the chart below shows, in the week from May 2 to May 9, three million Americans applied for unemployment benefits. 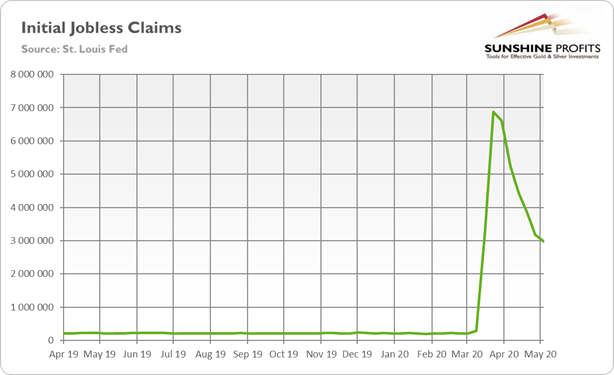 This chart implies two important things. First, the total number of people who applied for the unemployment benefit surpassed 36 million in the United States. It means that the implied naïve unemployment rate (which assumes no dropouts from the labor market) is almost 35 percent. Yes, you read it correctly: about one-third of Americans belonging to the labor force is without job. The real unemployment rate is lower, of course, as some people dropped out from the job market, but, on the other hand, lots of states are still underreporting new unemployment claims as they cannot handle the crush of applications. Anyway, the number is probably higher than during the Great Depression!

Second, although the new initial claims are going to subside as states are reopening their economies, the recovery may be slower than commonly believed. Please look at the chart above once again. Although since the end of March, the number of new claims is on the decline, the US economy still loses several million jobs a week. The number of initial claims reached a peak in just two-three weeks, but six weeks have already passed since the peak, and are the pre-pandemic level getting closer in sight?

The current havoc in the US labor market is unprecedented. And what is also unprecedented is the behavior of the stock market, given the ongoing pandemonium. One possible reason might be the hope that the crisis is temporary, which is partially justified. However, it might be also the case that the financial markets are a bit complacent, drugged by the Fed's monetary cocaine. Anyway, gold should get out of crisis strengthened due to the elevated uncertainty, lower real interest rates, and higher public debt.

And what about inflation? Will we see higher inflation rates? Or lower, as the recent data suggest? The US CPI inflation rate declined 0.8 percent in April, following a 0.4 percent move lower in March. It was the largest monthly decline since December 2008. The decrease was mainly driven by a sharp decline of 20.6 percent in gasoline prices. However, the core CPI rate, which excludes energy and food prices, also decreased in March – by 0.4 percent (versus 0.1 percent decline in March), as practically all indexes declined, including huge declines in the prices of apparel and transportation services (airline fares posted record drop). The only important exemptions were flat shelter prices and rising prices of medical care services and food. The drop in the core CPI was the largest monthly decline in the history of the series, which dates to 1957.

On an annual basis, the overall CPI increased 0.3 percent, significantly more than the 1.5 percent rise in March and the 2.3 percent rise in February. It was the smallest 12-month increase since October 2015. The core CPI rose 1.4 percent over the last 12 months, compared to the 2.1 percent increase in the previous month. It was the smallest increase since April 2011. The chart below shows these disinflationary trends. 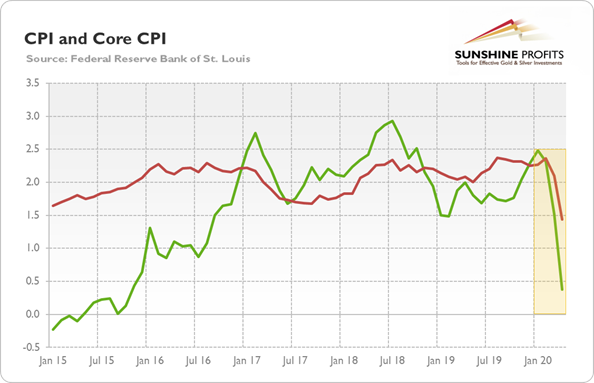 Importantly, gold prices did not show any weakness due to the lower inflation readings. For some people, it might be surprising – but not for our Readers, who know that gold is not just about inflation versus deflation. The yellow metal is a safe-haven asset that may shine during both inflationary and deflationary periods.

We mean here the quickly rising the supply of credit and of the broad money supply. Additionally, the reopening of economies should strengthen the inflationary pressure compared to the lockdown. It should translate into higher prices eventually, which should support the demand for gold as an inflation hedge. However, investors should remember that the increase in the broad money supply affects the prices with a significant lag of several months, and it might also be the case that the inflationary pressure will affect the asset prices more or earlier than the CPI Index.

(The opinions expressed in this article do not reflect the position of CapitalWatch or its journalists. The company has no business relationship whose stock is mentioned in this article. Information provided is for educational purposes only and does not constitute financial, legal, or investment advice.)

YOU MAY LIKE
Prev：Bergman Buy Update: South Korea is Buying Weed and So Should You Next：Bilibili Soars on Strong Revenue Growth, User Base Jumps