Potential investors are scrutinizing uCloudlink’s F-1, filed with the SEC last month. Questions are now being raised about the accuracy of some of uCloudlink’s disclosures, as they pertain to declining revenues, improbable cost structure, accounting anomalies and patent disputes. 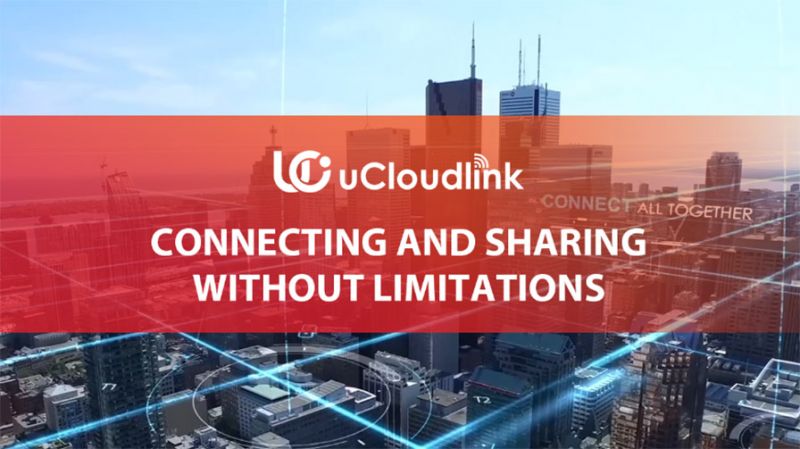 US lawmakers have taken aim at Chinese companies listed on Nasdaq and the NYSE in the latest skirmish between the countries. The Senate unanimously passed Holding Foreign Companies Accountable Act that would prevent companies that refuse to operate transparently from listing on Wall Street. According to the bill's cosponsors, the goal is to "kick deceitful Chinese companies off US exchanges."

Recently a series of incidents of financial fraud by Chinese publicly listed companies has been exposed, including Luckin Coffee (NASDAQ: LK), which evaporated over $5 billion investors' money in one day due to fraudulent overstatement of revenue. Another company, TAL Education Group (NTSE: TAL), a Chinese tutoring business said last month that an employee had inflated sales by forging contracts.

"As we continue to experience the economic fallout and volatility caused by the COVID-19 pandemic, the need to protect main street investors is all the more important," Rep. Brad Sherman added. "For too long, Chinese companies have disregarded U.S. reporting standards, misleading our investors."

This escalation in tensions has resulted in fast reaction by Chinese companies and their investors. Chinese multimedia company Baidu (NASDAQ: BIDU) lost 3% market value since the bill passed the Senate and is considering delisting from Nasdaq. NYSE-listed shares of e-commerce giant Alibaba (NYSE: BABA) fell more than 3% since the bill passed.

Meanwhile, another Chinese company, uCloudlink, is rushing toward its Nasdaq IPO early this month, ahead of likely passage of the Holding Foreign Companies Accountable Act. Potential investors are scrutinizing uCloudlink's F-1, filed with the SEC last month. Questions are now being raised about the accuracy of some of uCloudlink's disclosures, as they pertain to declining revenues, improbable cost structure, accounting anomalies and patent disputes.

How seriously has COVID-19 impacted revenue?

The global pandemic outbreak severely hit the global economy, and companies related to the travel industry are undoubtedly being hit the worst. For example, Airbnb, a shared travel/lodging unicorn, announced a 25% layoff and decided to abandon its plan to go public within the year.

Meanwhile, uCloudlink derives the vast majority of its revenue serving international travelers with its WiFi device rental business. There's no question that revenue has been severely impacted and potentially understated in the F-1 disclosures.

Are risks to its patent portfolio understated?

uCloudlink was founded in 2014, but according to publicly available information from a recent court case in New York, its ‘cloud sim' technology was developed and patented by Skyroam, a Silicon Valley company in the United States as early as 2008.

In 2018, Skyroam Inc. filed a lawsuit in the U.S. federal court, accusing uCloudlink of patent infringement. In April 2019, the Southern District Court of New York found that the uCloudlink intentionally infringed Skyroam's patent rights and ordered uCloudlink to pay $2.18 million in infringement compensation. The court revised the judgment again on October 16, 2019, and increased the judgment to $8.2 million.

In court, it was revealed that Skyroam's founder, Jing Liu, developed the ‘virtual SIM' technology, which enables users to automatically download a virtual SIM based on surrounding network signals without inserting a physical SIM card. According to transcripts, in 2013, a former Huawei employee named Wang Bin joined Skyroam as a senior software architect, but after several months left to join uCloudlink, a company founded by his former Huawei colleagues (Where Chairman, CEO, COO, CFO, CSO, and Chief R&D all worked at Huawei). Only one year later, uCloudlink released their first portable WIFI product that closely resembled Skyroam's products. The court also issued an injunction, preventing uCloudlink's Wi-Fi products from being sold in the US.

There are still more pending lawsuits that could continue to erode uCloudlink's IP portfolio and add to mounting legal liabilities. At present, intellectual property lawsuits regarding uCloudlink and Skyroam are continuing. In the United States, Skyroam continues to sue in a trade secret filing in Texas; in China, uCloudlink has also been sued by Skyroam for the ownership of multiple patents, including core technology patents.

Is the long-term business model too risky?

According to uCloudlink's F-1 prospectus, its business model has three stages of development: stage 1.0, in which uCloudlink mainly sells/rents portable WiFi to outbound international tourists; stage 2.0, in which the company will provide users with domestic data services competing directly against mobile carriers such as AT&T and T-Mobile; and in stage 3.0, the company plans to sell its cloud SIM boxes to individual users so they can create a peer-to-peer data-sharing platform.

In stage 2.0, uCloudlink has proposed a plan to transform from a WiFi hardware rental company serving international travelers into a local service provider selling directly to end-users. Many markets are already saturated with MVNOs and other resellers that have expertise within a specific market segment. Ucloudlink has not demonstrated this capability yet, up to now selling wifi through b2b channels, not directly addressing local markets. This plan calls into question whether a pivot to an untried business model competing directly against its carrier suppliers can be executed successfully.

In stage 3.0, uCloudlink assumes end consumers would want to share their unused data with other people, like a car-share model, but with SIM cards. The concerns with this model are around personal security and viability of the business model. Users may not want strangers to have access to their personal details in exchange for small amounts of income.

Licensing and regulation in the global telecommunications industry is also tricky. In March 2018, user information from more than 50 million Facebook customers was leaked, prompting the EU to implement the General Data Protection Regulation (GDPR). Regulators could place severe restrictions on any technology that puts personal privacy and data protection into jeopardy.

Has the financial data been scrutinized adequately?

A close look at the P&L in uCloudlink's Form F-1 raises even more questions. 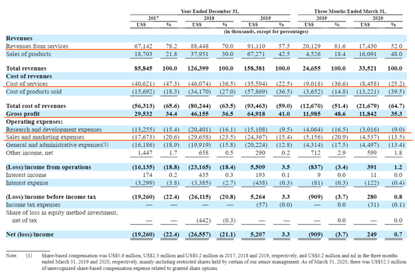 The income statement in the prospectus shows that uCloudlink's revenue mainly comes from mobile data services, which they arbitrage by buying from carriers and selling to end users, and from WiFi device hardware sales. Data revenue in the period 2017-2020Q1 has decreased by 2.5% year-over-year. However, device hardware sales revenue from 2017 to 2020Q1 continues to increase. The growth rates in 2018 and 2019 reached 103% and 77%, respectively.

The company's active equipment and daily consumption traffic situation disclosed in the prospectus for 2017-2020Q1, the two figures 2018, 2019, and 2020Q1 both showed substantial growth. uCloudlink explained that the data revenue in 2018 has increased significantly compared to 2017, mainly due to the increase in active equipment and daily consumption traffic.

Prospective investors are concerned with how uCloudLink, which relies on users buying their data services, are able to sell more and more devices each year claiming user expansion and average data consumption increases each year, but data revenue continues to decline each year?

In the prospectus, this income is explained as the company's own hardware product sales, as well as the partners' hardware sales, but there is no clear description of how the revenue and cost-sharing related to the partners are carried out. It is difficult to judge how much of the hardware revenue, which accounts for an increasing proportion of revenue, is created by uCloudlink. It is also debatable whether the company can continue to maintain such a high growth rate in the future.

In addition to the problems with the respective growth of the two revenue streams, the trend of the company's financial data is also contrary to the business model we saw earlier.

Why does a company that is transitioning to light assets increase the proportion of hardware revenue year by year? What is the company's future business model? The prospectus extensively covers the cloud SIM platform, but at its core, could it be primarily a hardware company selling WiFi devices?

There are also some concerns about the cost side of the P&L. With some calculation based on their total traffic and total data cost disclosed, it seems to reach that profit margin they claimed each year, their average price of global mobile traffic cost in 2017-2020Q1 must be $4.47, $1.63, $0.41, and $0.16 per GB respectively.

$0.16/GB average data cost in Q1 2020 seems to be highly unrealistic. For example, Google Fi, a very large buyer of mobile data, is selling at $20 for 10GB of global data, or $2 per GB. Certainly, they are not generating a 92% gross margin, which would be the case if they were able to purchase global data at $0.16 per GB. Since cost of data is so critical to the financial model, if this number is even slightly off, Ucloudlink could drive a negative gross margin and the model could completely collapse.

Based on the above analysis, the company's performance and finances may be inconsistent with industry standards and general business knowledge. Does the Form F-1 accurately convey revenue, users and costs, or could there be inconsistencies that put the model into jeopardy?

uCloudlink's listing process has not been smooth. It is understood that in the second half of 2019, uCloudlink hired a Morgan Stanley executive as the CFO, and used Morgan Stanley as the main underwriter to prepare for listing in the United States. But in 2020 it seems Morgan Stanley quit on them and their CFO also quit. Their underwriters have been replaced by Chinese-funded Tiger Securities, Huasheng Securities, foreign-funded I-Bankers and Loop Capital. Is it possible that Morgan Stanley found red flags in the previous attempt to go public?

In summary, it appears that UCloudlink hopes to maximize its IPO valuation in the face of serious unanswered questions. Investors should tread carefully as they consider this offering and others from China.

American investors and Washington politicians need to ask why Chinese companies continue to access our markets without abiding by the same rules. Many investors are counting on Congress to swiftly pass the Holding Foreign Companies Accountable Act to protect America's capital markets and rebuild investors' confidence.