How to Navigate These Tricky Waters of the Bull Market

Recall the February bearish wedge – the predictable measured rise, and what came next. 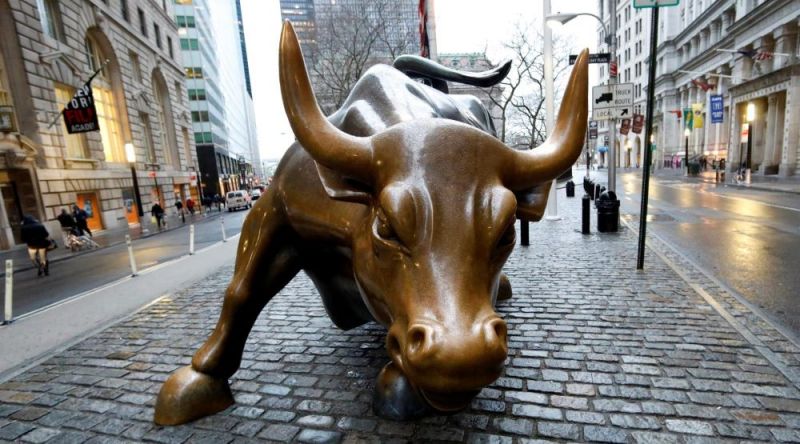 Stocks keep reaching for new highs, but the bearish wedge and volume are giving me second thoughts. Stocks are getting ready to move, and today's analysis will paint as clear a picture thereof as it gets. 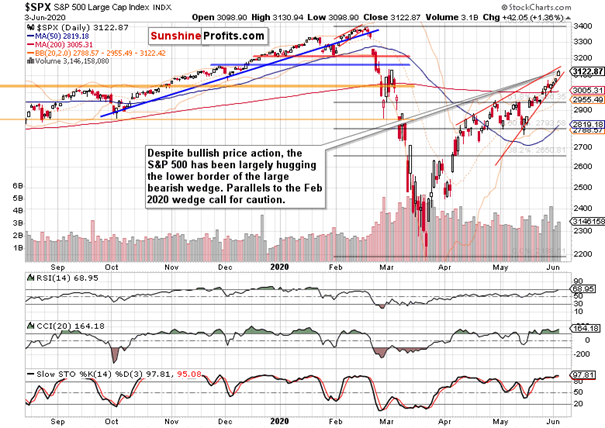 Please note the bearish wedge (thin red lines connecting April tops at its upper border, and May bottoms at is lower border) as it's nearing its completion. Stock prices are rising steeply, but seem to be having issues keeping inside the wedge. It's been only yesterday that they cleared the vicinity of the lower border they've been flirting with for several days already. As the volume slightly improved yesterday, one might be forgiven for taking it as a near-term bullish sign.

To me though, it's suspicious, and for one simple reason that I'll tell you about in the following section. First, though, take a look at the extended daily indicators (e.g. RSI approaching the 70 level where it months ago used to muddle through before rolling over). For how long can they keep rising day in and day out – is the daily grind higher like clockwork sustainable? I don't think so, as every healthy uptrend needs to be punctured by the occasional sideways or down price action to make it sustainable – indirect Fed support present or not.

Please recall also the February bearish wedge – the predictable measured rise, and what came next. While I don't say that stocks are due such a watershed moment, for such a momentous plunge with lasting capacity, I expect hesitation, sideways trading and an attempt to push prices lower in what I would describe as an opening stage in the summer doldrums. Yes, we're in a stock bull market but no tree grows to the sky (in one line, stocks especially).

What could drive that fundamentally? A growing realization that the riots are not a several-days' event? That the 9,300 arrests made so far haven't brought it under control? That the rioting goes on regardless of curfews and that more National Guard units are needed? Are the rioters practicing social distancing apart from the widespread use of facial coverings? Can't that help bring about some form of the dreaded second coronavirus wave in around 8 weeks? Curfews or lockdowns, what good will that do to economic activity, reopening, and small business wanting to just get back on their feet? And what about the potential to play the China card to divert attention from issues at home?

These are serious fundamental risks to the stock advance in the short- and medium-term. Sure, the Fed stands ready to act, and should things start getting out of hand, they will act – and as we've seen during the once-in-a-lifetime reaction to corona getting exponential (not even during the Spanish flu did the economy grind to such a screeching halt, fiat or not), the central bank would sooner of later override whatever deflationary forces might have had the upper hand in the short run.

Despite the relative S&P 500 stability, these are the times fraught with risk. Drums up please for the simple reason why I think so – enter the credit markets. 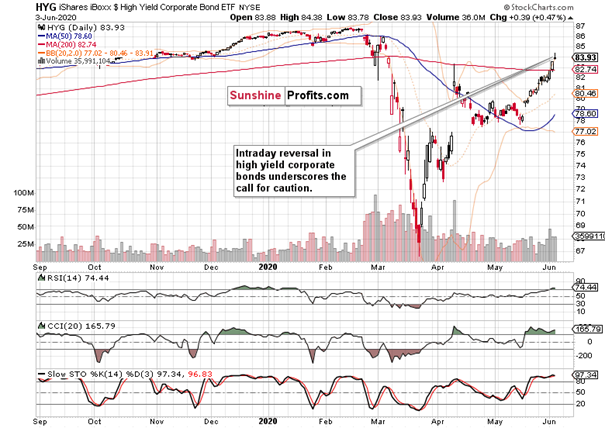 After the recent string of rising prices, high yield corporate bonds (HYG ETF) formed a daily reversal candlestick. As a minimum, that spells a short-term consolidation soon – regardless of the volume not rising much at all beyond its recent values. While the daily indicators are extended, the momentum of last weeks can take bonds in the very short-run higher still – even as the RSI is solidly above 70 now. 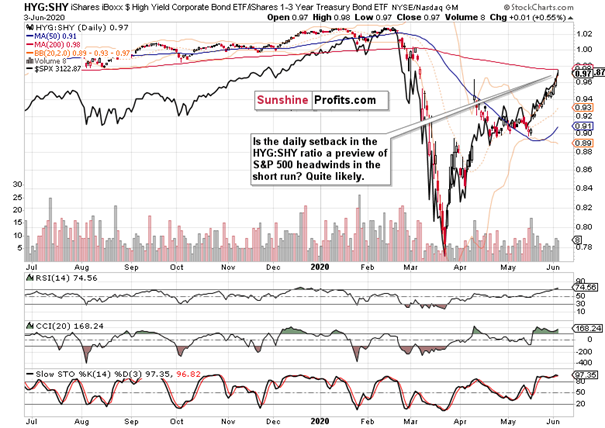 While likely of fleeting shelf life, yesterday's high yield corporate bonds to short-term Treasuries ratio (HYG:SHY) hesitation is a short-term warning sign, because it has recently been this metric that led stocks higher, and not vice versa.

Having said that, I still expect the credit market metrics (including investment grade corporate bonds to longer-dated Treasuries, LQD:IEI, that barely erased yesterday's intraday losses) to support the stock uptrend to reassert itself after whatever kind of consolidation (including the potential one a tad sharper for the bulls' taste) comes.

Just take a look at the below stocks to Treasuries ($SPX:$UST) ratio as it's breaking out to new highs. 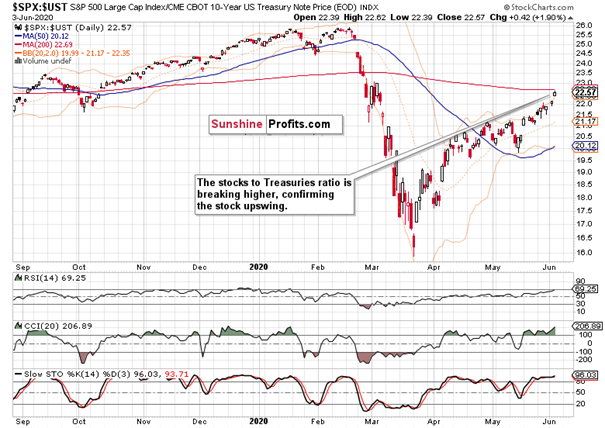 That looks to be much more like an inflationary storm to come than another deflationary episode. Given the Fed's and fiscal measures taken (they're joined at the hip, because where would all the new Treasuries to buy come from if not from deficits?), the odds favor the Fed to keep at winning this reflationary game right now. 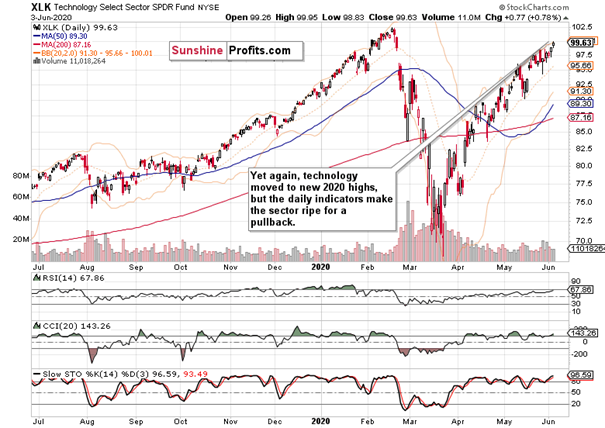 Technology (XLK ETF) made another high, but the daily volume is drying up. While prices are primed to go on rising, that's a short-term watch out. I wouldn't be too afraid of the extended daily indicators here, because prices have been strongly trending higher without really making lower lows (let alone lower highs). Realistically, a short-term pullback is the best the sellers can hope for. 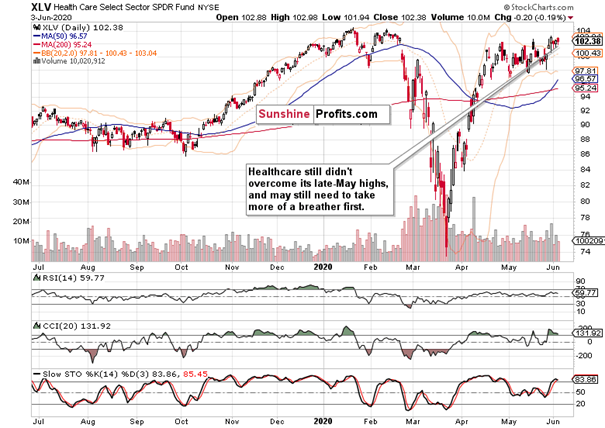 Healthcare (XLV ETF) is hesitating in the short-term, but also remains primed for more gains – they just likely won't be as meteoric as in the case of tech. Yesterday's red candlestick in healthcare also raises the likelihood of short-term headwinds in stocks. 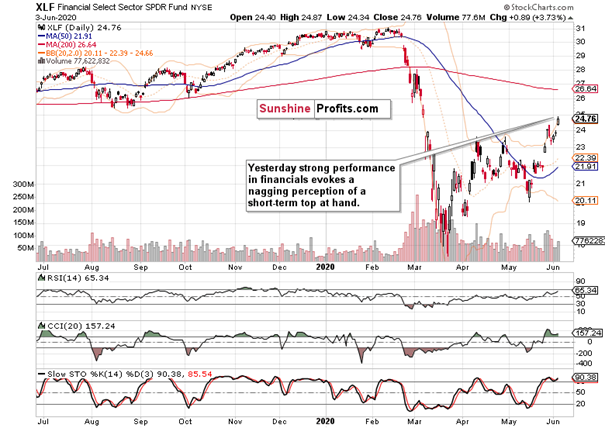 A strong daily upswing coupled with a bullish gap in the financials (XLF ETF) – but will another move higher along the late-May lines follow? I don't think it's likely right now. Rather, this could mark a short-term top drawing near, especially given the potential for the HYG ETF to digest its strong recent gains first.

Applied to the situation at hand, they don't appear to be making a top here, and the young stock bull market remains intact.

Q: Technical point of view still showing lots of clashes with current rally of bulls run. Elliot wave count shows the similarities with Feb's charts. I guess Fed's interference with crossing the red lines created a chaotic chart that doesn't rhyme with technical fundamentals, What do you think will happen once the guidance is back? All the PE, micro/ macroeconomics, and unemployment currently don't have any weight on this rally, and how all these will affect future stock prices?

A: Yes, the stock market rally has entered a moment of truth if you will, and I bet on the forces of inflation (i.a. higher stocks) to win sooner rather than later, even if that would mean muddling through the summer and election uncertainties next. Definitely, the serial bombshells dropped by the Fed shortened the duration of the bear market – both the downside and upside moves are happening faster these days. Years and decades earlier, it used to take months for the market to bottom, but now it can be a matter of weeks merely.

Understandably, fundamentals have a hard time keeping pace. Consider the yesterday-mentioned CARES Act job market provisions to expire late in June – unemployment turmoil will return if no action is taken. Similarly, the bankruptcies will take time to cascade through the system. But policy actions are aiming to soften the blow – and that's what stocks count on. They're salivating whatever actual shape the policy measure takes, just gimme the punch bowl and I'll work it out along the way and go on rising, that's what stocks are saying.

The extraordinary P/E ratios will turn in the direction of more normal before inflation strikes. As surprising as it might seem, I would rather look at the P here instead of E – and the P part, that's bullish.

As for the similarity to February, I don't expect anything remotely approaching the corona panic-driven slide – stocks would likely carve out a (relatively shallow) bottom before continuing higher as if nothing happened, bearish wedge, or not.

Summing up, yesterday's upswing is bullish at face value, but signs warranting caution are creeping in again. It's namely the bearish wedge nearing completion coupled with yesterday's weak high yield corporate bonds performance. The sectoral examination reveals that the S&P 500 is vulnerable in the short-term to a temporary takedown, regardless of (and perhaps even in line with the potential for a reversal in) the early bull market trio (energy, materials and industrials) upswing yesterday. As we're in a bull market, the balance of risks in the medium-term remains skewed to the upside – in spite of the unsuccessful first attempt at the early March top. Yes, the buy-the-dip mentality is back.

YOU MAY LIKE
Prev：Recovering China Property Market Doesn't Help Fang's Stock Next：When People Riot, Should We Call on the Military--or on Gold?