When People Riot, Should We Call on the Military--or on Gold? 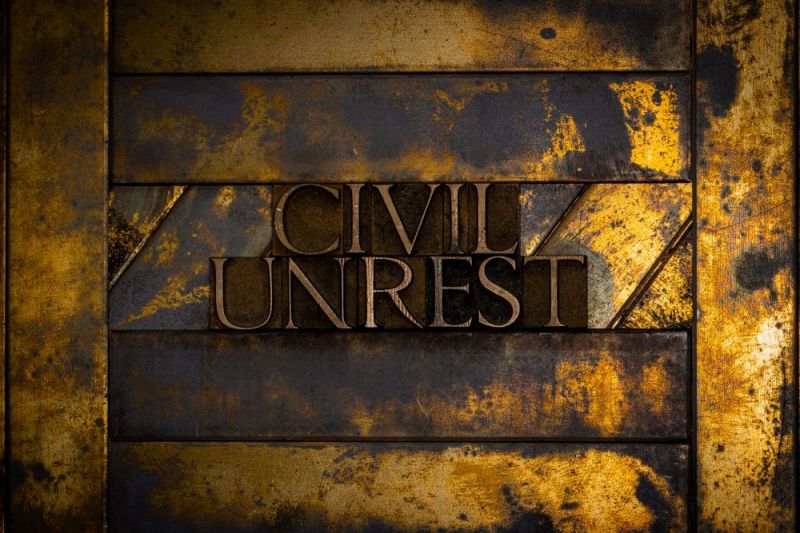 Could 2020 end, please? The pandemic is not over and the U.S. suffers now from mass riots across the country. They could aggravate the coronavirus crisis and increase the demand for gold.

On May 26, a black man, George Floyd, was killed by the police in Minneapolis, Minnesota. During his arrest – he allegedly used earlier a $20 counterfeit bill in a nearby store – the police officer put a knee on Floyd's neck on the ground, although the arrestee was not aggressive and repeated several times that he could not breathe.

All the police officers involved in the arrest were fired the next day but arrested only on Friday. The arresting police officer who strangled Floyd was charged with murder and manslaughter. But it was not enough for many people. Outraged by the police's brutality resulting in Floyd's death and lack of quicker arrest of the police officers, hundreds of protesters poured into the streets across the country, including New York, Washington D.C., and Los Angeles.

Initially, protests were peaceful but later they have escalated as police have clashed with demonstrators and many shops have been looted. More than 5,000 people were arrested since the beginning of the protests on June 2.

Indeed, the situation has become serious. On Friday night, the riots triggered the highest alert on the White House complex since the September 11 attacks, and Secret Service agents rushed President Trump to the White House bunker as protesters gathered outside, some of them throwing rocks. Twenty-three states have called in the National Guard to quell unrest, and Trump threatened on Monday to mobilize the military across the U.S.

What do the riots across the U.S. imply for the country and the gold market? Well, the civil unrest should be positive for the yellow metal. There are three reasons for this. The first and most obvious is that geopolitical risks concerning the U.S. directly could spur the safe-haven demand for gold. We are, of course, fully aware that geopolitical factors rather do not drive the long-term trend in the gold prices, but they help in the short-term. As the chart below shows, the yellow metal has been consolidating recently around $1,700, perhaps preparing for further upward move. 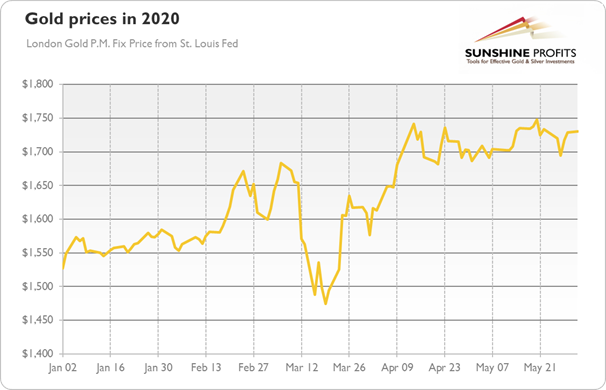 Second, the mass protests during the pandemic is, um, well, not something that epidemiologists dream of. You don't have to be a scientist to deduce those big demonstrations and large gatherings – and many protesters do not even wear masks – could accelerate the viral spread and increase the chances of the second wave of infections, or at least, hamper the deceleration of the epidemic. The longer and more severe the epidemic, the better for gold.

Importantly, although the direct reason behind the protest was police brutality against the black community, the long period of social distancing and economic lockdown, spurring high unemployment, aggravated the civil unrest. We warned in late April, that we could see the premature reopening of the economies or even the riots. Now, we have both. A bad combination from the health and economic point of view, but quite supportive for the gold market.

Third, the civil unrest could also slow the economic recovery from the Covid-19 pandemic. The violent protests and looting destroyed some stores, buildings, and cars, subtracting from the GDP. Many people already reduced their economic activity due to the Covid-19 outbreak – the new civil protests can add a new layer of uncertainty and subdued consumer spending and business investment. Hence, although not a game-changer, at least not yet, the riots could support the gold prices, especially if they contribute to the current depreciation of the dollar.