There is Still a Tidal Wave of Problems for Cruise Operators

Will it ever be smooth sailing again for cruise operators? Benjamin Chaiken an analyst at Credit Suisse says there are buys in these stormy waters. 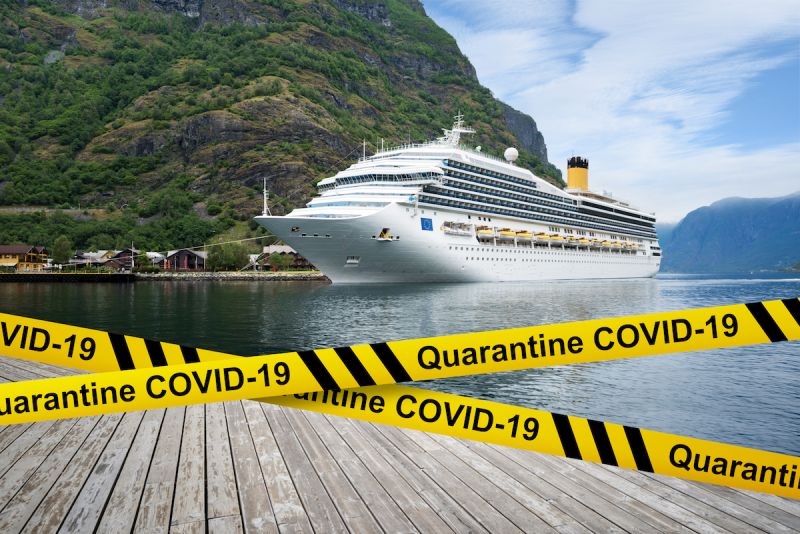 As we head into our third month of Covid-19, cruise operators remain in shutdown mode and many likely won't start sailing again until the end of summer.

That isn't the only problem for cruise firms, as the spread of the virus on their ships over the last few months has created a dangerous environment for crew members and passengers. According to a Miami Herald investigation, over 3,000 passengers and crew members in 63 ships have contracted Covid-19 along with least 82 deaths. From legionnaire's disease to Covid-19, a cruise ship is floating Petri-dishes, an environment that seems almost intentionally designed to create a perfect storm of infection.

While it has been tough for some passengers, at least most were able to get off cruise ships by early April. According to a separate report from The Miami Herald in May, more than 100,000 crew members remained stuck on cruise ships. With Covid-19 related travel restrictions and port closures, cruise operators have struggled in repatriating their members. The delayed repatriation process could hurt the industry going forward, as noted by Rockford Weitz, the director of the Maritime Studies Program at Tufts University's Fletcher School.

"[The cruise companies] have to show they are going to have the capability in an emergency situation to get people at scale off of the ship and back home," Weitz said

He added, "They have to be able to convince their customers they can find solutions and work constructively with public health authorities. The time for excuses at this point in May, there's no excuse for not finding the way home."

Also, cruise companies' inability to send their crew members back to their home countries adds to the public relations nightmare and hurts the stock.

The industry as a whole isn't dying, but the zero-revenue environment since March has taken a toll on Royal Caribbean Cruises Ltd. (NYSE: RCL). The worldwide company, which operated 62 ships at the end of March, reported a net loss of $1.44 billion, or $6.91 per share on revenues of $2.03 billion in the first quarter.

Not that this comes as a huge surprise, but the Miami-based company has warned of second-quarter losses and expects to pay between $590 million and $610 million in interest expenses for the remainder of the year. It is also expecting to burn through $250 million to $275 million per month.

While it has had to make tough decisions such as furloughing employees, RCL has made moves to improve liquidity. That includes completing a $3.3 billion senior secured notes offering and reducing capital spending. Even with the cash-burning, Benjamin Chaiken an analyst at Credit Suisse believes the company "should be able to manage the slowdown".

"We think the Caribbean –where RCL is best positioned in terms of capacity allocation and product--could be a bright spot when demand does return.

He added, "Many Caribbean itineraries require little or no air travel to embarkation, which we think is likely a positive for those with remaining fear over air travel."

As of March, RCL had roughly $2.3 billion in liquidity. With shares down 46% YTD, as of midday Monday, RCL could be a wise long term bet, but don't expect it to fully recover for a while. The stock is a hold at $72 per share.

All Aboard Norwegian's Stock

It has also been a choppy year for Norwegian Cruise Line Holdings Ltd. (NYSE: NCLH), as it posted a first-quarter loss of 99 cents per share, which came in nearly double more than Zacks' Consensus Estimate of 52 cents per share. The global operator of 28 ships is also burning through around $110 million to $150 million of cash a month.

Norwegian has done a strengthening its financial position in this less than ideal environment.  When its more than $2 billion transaction closes, the company will have nearly $3.5 billion in liquid assets and says its "well-positioned to weather Covid-19 impacts."

In addition, Norwegian has cut capital expenditures by $515 million and has furloughed 20% of its shoreside staff.

Shareholders should feel good about the fact that it can survive 18 months without generating revenue, according to its CEO Frank Del Rio. While its stock is down 58% YTD, I recommend a buy at or below $25 per share.

Chaiken is also confident in the stock, giving it an outperform rating and setting a $21.00 price target. He said, "We think NCLH offers a differentiated vacation, within an oligopoly, at a significant discount to other land-based alternatives and as such we believe we will see demand for the product come back."

No doubt investors will want to keep an eye on Norwegian as it hopes to resume sailing in August. Good things are on the horizon for this stock.

Another major cruise operator Carnival Corporation & Plc, (NYSE: CCL) may be the riskiest bet. First, it is important to note that it had solid-liquid assets of $11.7 billion, as of Feb. 29. However, things have gotten much worse since then, and it is burning through an alarming amount of cash, as noted by Chaiken.

"From a cash burn perspective, we estimate CCL has a cash burn profile in the ~$1 billion per month range, leaving them with just over nine months of runway in a zero-revenue environment," he said.

Another issue with CCL is most of its customer base comes from Europe; Chaiken is less confident in a European economic recovery, especially Italy. While investors may find some attraction with CCL's shares being down 53% YTD, burning through the significant amount of cash per month should make some investors consider jumping ship. This stock is not a buy.

Even if Carnival sets out for the high seas in August, it still likely has a long road to recovery as compared to Norwegian and RCL. However, breathe a sigh of relief if you're a shareholder, as Chaiken does not see bankruptcy in its near future. Just be prepared to take a seat and wait anxiously—and make sure to have a financial lifeboat handy.

Lindblad Could be Undervalued

There is one cruise operator that may be underrated in the market and that's Lindblad Expeditions Holdings, Inc. (Nasdaq: LIND)

While revenue slipped 9% to $81.2 million on a net loss of $2.47 million in the first quarter, unlike the other cruise operators, Lindblad is a small-cap company valued at just over $500 million. However, that shouldn't scare you away from the New York-based company, as most of its customers are known to be loyal and wealthy.

"Even if we go into some kind of recessionary environment, their average customer is wealthy, so we don't think you would see that much of an impact," Steven Wieczynski an analyst at Stifel said.

Another advantage is the small size of vessels, which hold from 48 to 148 passengers, making them easier to clean and disinfect.

While its cruises remain shut down, Lindblad expects to burn through $10 million to $15 million per month. At the end of March, Lindblad had $137.0 million in unrestricted cash. I am putting a buy on the company at under $10 per share; the stock is in a good position to navigate around these difficult Covid19 stricken waters. Shares of Lindblad are down 35% YTD.

For investors interested in Chinese companies, Genting Hong Kong Ltd. (HKEX: 0678) is a stock to consider. An important thing to note is the Hong Kong-headquartered company trades at just pennies, its stock treading water at around HK$50 to HK$60 cents per share.

In its latest earnings report in March, Genting said its revenue fell 2% year-over-year to $1.56 billion in the full year 2019. Meanwhile, net loss narrowed to $96.2 million compared with $141.5 million in the same period in 2018. In the first quarter, it noted that almost all its cruise ship operations were suspended.

The company also put in place voluntary cut on salaries for 20 to 50% of managers in its corporate office in an effort to save $15 million, or roughly 16% of shore salaries and wages in 2020. In addition, Genting has warned of an operating loss in 2020. Before even considering buying, it would be best to wait until Genting either reports its first-quarter results or provides an update on operations.

There is no question, cruise operators have a long road ahead of them going forward. Jamie Rollo, a managing director at the company, is taking that a step further and says, "The cruise industry will take longer than almost any other form of travel to return to normal."

Investors are also going to have a difficult time trusting cruise companies, who have failed to timely repatriate their crew members and passengers. According to the Miami Herald's report in mid-May, CCL has repatriated 37% of its crew, while RCL has sent home around 23%. While cruises cannot be blamed entirely for dealing with an intransigent government, in the end, it causes more concern for investors and passengers, alike.

Another tsunami that cruise operators have to face is a way to convince public health officials and governments that traveling is safe. Rollo said, "When sailing does resume, it might take only a small outbreak on one ship to cause global operations to be suspended again, so the industry needs to get this right the first time." You can bet once cruise operators make their pleas to regarding instilled safety protocols, health officials will point to the 3,000 Covid-19 cases that were reported on cruisers.

All this said, the industry was projected to grow to $31.5 billion this year, which would represent a compound growth rate of 7% from 2010, according to the Cruise Lines International Association. While it is a growing industry, it is also a relatively small one in the travel sector, as 32 million passengers were projected to travel on cruise ships in 2020, the report said.

However, once cruise companies start sailing again come summer, stocks should rise. How far and how fast will depend on how well the corporate captains steer the ship.