The recent job report is not reliable, but it shows recovery in the US labor market. The situation is still bad, but optimism could triumph for now, which is bad for gold.

On Friday, the Bureau of Labor Services released the newest edition of the Employment Situation Report. The publication shows that the US economy regained 2.5 million jobs in May, constituting the biggest nonfarm payroll surprise in history. Indeed, economists polled by MarketWatch had forecast a loss of 7.25 million jobs. The rebound is presented in the chart below. 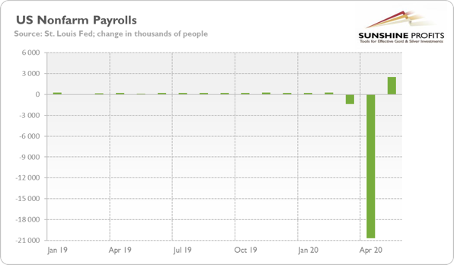 Meanwhile, the analysts expected that the unemployment rate would rise to 19 percent from 14.7 percent in April, but it declined to 13.3 percent, as one can see in the next chart. The report, if reliable, signals that the postpandemic recovery has begun, as the charts below show. 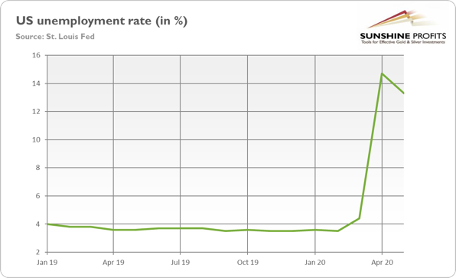 Not surprisingly, the stock market reacted euphorically, with the S&P 500 Index jumping more than 2.5 percent on Friday, while the price of gold dropped below $1,700.

But is the situation in the US labor market indeed so rosy? Not quite. After all, even if the data reported by the BLS is reliable, the number of working Americans is about 20 million lower than before the pandemic, and the unemployment rate is still at the highest level since the Great Depression. So, there is still a long way to go until the labor market returns to normalcy.

But it's not even the case that the recovery has really begun. You see, the report is not reliable. And the BLS admitted itself, writing that

If the workers who were recorded as employed but absent from work due to "other reasons" (over and above the number absent for other reasons in a typical May) had been classified as unemployed on temporary layoff, the overall unemployment rate would have been about 3 percentage points higher than reported.

In plain English, it means that the BLS incorrectly described the job status of millions of people and without such an error, the unemployment rate would be not 13.3 percent, but 16.3 percent. So instead of decreasing – suggesting the start of the recovery – it would rise further since April.

The ADP report released earlier in the week, based on data directly from the employers themselves, showed almost 3 million more lost jobs, not again in jobs. The number was also better than forecasts, but significantly worse than the BLS data. 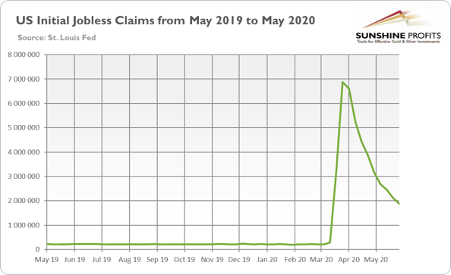 What does the recent Employment Situation Report imply for the gold market? The headlines are very positive, implying that the recovery started earlier than expected. It should spur more optimism among investors, which could further fuel the rally in the stock market, while weakening the safe-haven demand for gold.

However, the BLS data is not completely reliable and the real unemployment rate likely exceeds 16 percent. The government wrongly classified millions of people as "employed but not at work" instead of "unemployed on temporary layoff". Hence, the labor market is still in a terrible spot, so investors should remain cautious.

In the short run, the optimistic narrative could triumph in the marketplace. After all, the reopening of state economies in May should start the economic recovery. But we will see what the more distant future will bring. The second wave of infections is still possible and after all these riots in the US make it even more probable. Nevertheless, the risk appetite should strengthen now with the positive (although partially fake) job report, which is bad news for the gold market.