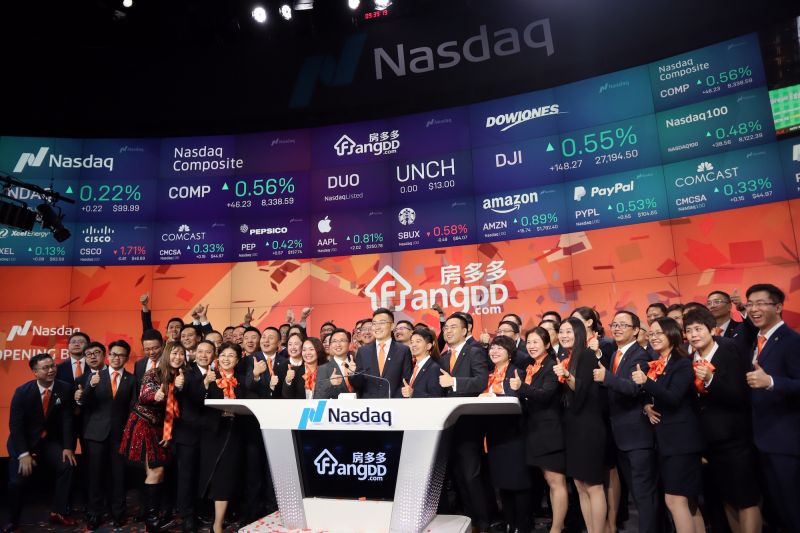 Shares of Fangdd Network Group Ltd. (Nasdaq: DUO) have skyrocketed 610% since Monday's close on what the company calls "unusual market activity" as its number of active agents grows.

First, let's talk about the stock movement. As its trading volume on Tuesday surged significantly and passed its daily average at 249,500 shares, the Chinese property technology company responded, noting, "In light of the increases in the price and trading volume of the Company's American depositary shares ("ADSs") on June 9, 2020, FangDD stated that its policy is not to comment on unusual market activity or speculative matters."

Fangdd added in a statement today, "The Company cautions investors that the trading price of the Company's ADSs could be subject to significant volatility for various reasons that are out of the Company's control."

Before peaking at $129.04 per share on Tuesday, the Shenzhen-based company's all-time high was $16.60 per share. As of early trading Wednesday, Fangdd was trading at $67.50 per share and has now seemingly settled at around $29 per share, still up from its level of $11 at which it had traded for months.

Bloomberg said this about the move: "It's unclear what sparked the runaway rally, which occurred in a week that's already seen high volatility chalked up to factors from retail investors bidding up bankrupt stocks to short covering or just a fear of missing out."

Now, the idea that retail investors mistook Fangdd's symbol DUO with a FANG stock is stretching it. As for the other possible reason Bloomberg lists, there could be some truth to that. But what Bloomberg fails to mention is, according to CNNBusiness, the two analysts offering 12-month price forecasts for Fangdd Network Group have a median target of $89.66 per share, with a high estimate of $113.58 and a low estimate of $65.74.

At this price, the company is still far undervalued according to those analysts, and with new investors in now at a far higher floor than before the massive move, thinking of buying at this current price if it holds today might be both a solid short-and long-term bet.

The news comes as China's largest real estate marketplace reported separately today that its number of active agents rose 43% year-over-year to 218,500 in the first quarter.

Xi Zeng, the co-CEO of Fangdd, attributed the company's growing number of agents to its SaaS solutions. He said, "Our commitment to optimizing both our SaaS solutions and service offerings has helped to significantly enhance our platform's value propositions for agencies and developers."

However, Fangdd did struggle with the impact of Covid-19. It reported that in the three months through March its revenues fell 59% year-over-year to $38.4 million on a net loss of $19.3 million.

In efforts to bring value to its shareholders, Fangdd plans to continue refining its SaaS solutions and matchmaking algorithms to bolster its agents and property listings on its platform. Going forward, Fangdd expects to generate revenues in the range of $93.5 million to $102 million in the second quarter. Investors will want to keep an eye on Fangdd; another wild run-up might occur in the near future and you wouldn't want to miss that.