Low Inflation Makes Powell a Dove. How Does It Affect Gold? 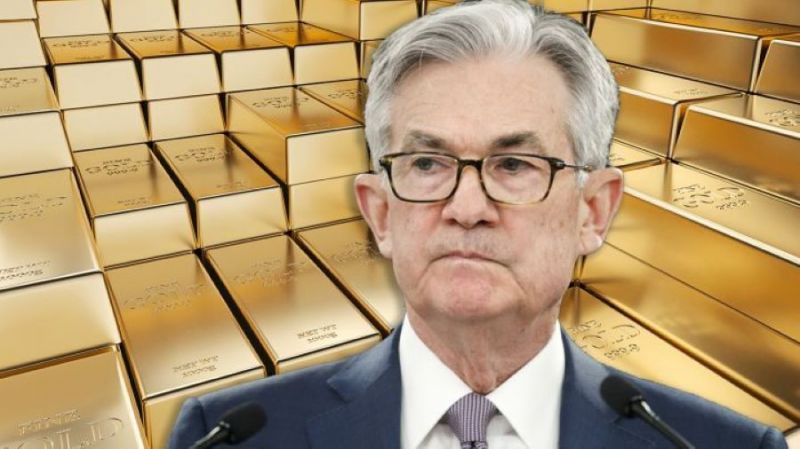 The US CPI inflation rate declined 0.1 percent in May, following a 0.8 percent drop in April. The decrease was mainly driven by decreases in energy, transportation, and apparel prices. The core CPI also declined 0.1 percent, following a 0.4 percent drop in April. It was the third consecutive monthly decline, which happened for the first time in the history of the index that starts in 1957. Anyway, compared with the previous month, we see some stabilization of disinflation forces, at least on a monthly basis.

On an annual basis, the overall CPI increased just 0.2 percent (seasonally adjusted and merely 0.1 percent without the seasonal adjustments), following 0.4 percent increase in April. It was the smallest 12-month increase since October 2015. The core CPI rose 1.2 percent over the last 12 months, compared to the 1.4 percent increase in the previous month. It was the smallest increase since March 2011. Both indices are substantially lower than a few months ago. The chart below shows these disinflationary trends. 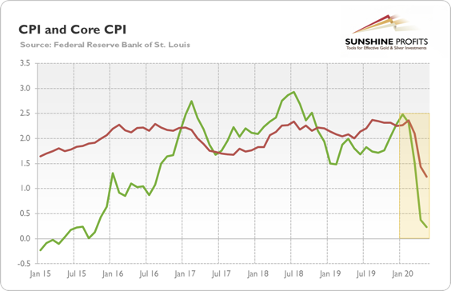 The softening inflation could theoretically reduce the demand for inflationary hedges, but it also means that the Fed will remain dovish for years, which should support gold prices overall.

In the last edition of the Fundamental Gold Report, I mentioned the last Powell's press conference, but I would like to point out a few more things. First, he said that the Fed is considering targeting the yield curve, similar to the Bank of Japan. If adopted, such policy should imply ultra-low interest rates for longer, supporting the gold prices.

Second, Powell signaled also that the interest rates will remain low at least until the unemployment rate will not return to normal:

So, I think we have to be humble about our ability to move inflation up, and particularly when unemployment is -- is going to be above most estimates of the natural rate for -- certainly above the median in our -- in our -- in our SEP, well through the end of -- past the end of 2022.

It means that even if inflation goes up, the Fed will not react in a hawkish manner as long as the unemployment rate is below the natural rate of unemployment. Given that inflation has recently declined, the Fed's dovish bias is almost certain. And what is important here is that Powell expects a significant slack in the labor market. In other words, the coronavirus crisis will lead to permanent job losses:

My assumption is that there will be a significant chunk -- chunk, well into the millions. I -- I don't want to give you a number because it's going to be a guess, but well, well into the millions of people who -- who don't get to go back to their old job and in fact, there isn't a -- there may not be a job in that industry for them for some time. There will eventually be, but it could be some years before we get back to those people finding jobs

Third, Powell is worried about the second wave of coronavirus cases. He believes that it might be another factor behind the gradual recovery, not necessarily a V-shaped one:

I think, that if a -- if it happens -- you know, the -- the issue would be, first of all, people's health, but secondly, you could see a public loss of confidence in -- in parts of the economy that will be already slow to recover, so it could hurt the recovery, even if you don't have a national level pandemic, just a -- just a series of -- of local ones -- of local spikes could -- could have the effect of undermining people's confidence in traveling, in restaurants, and entertainment, anything that involves getting people together in small groups, and feeding them, or flying them around, those things could be hurt. So, it would not be a positive development, and I'll just leave it at that.

And Powell might be right. As the chart below shows, the number of U.S. daily cases have been rising recently, probably due to massive riots on American streets. 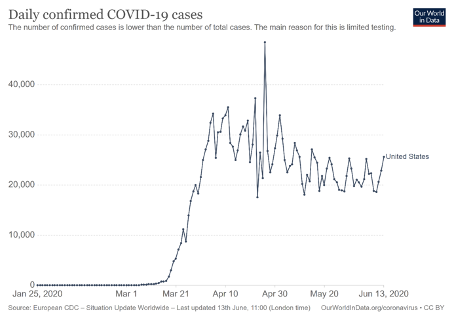 What does it all mean for the gold market? The recent Powell's press conference indicating that there is still a long way to recovery was cold water for many stock market investors (but not for our Readers, as we have been warning for many weeks that the investors' optimism about the V-shaped recovery may not really be founded in reality). People also started to worry that new virus infections could stunt the pace of economic recovery. In consequence, both the Dow Jones and S&P 500 indexes suffered their biggest weekly percentage declines since March. The weaker risk appetite should be positive for safe-haven assets such as gold. Moreover, lower inflation with uncertain recovery implies a dovish Fed and the ZIRP to stay with us for years, which – from the fundamental point of view – should also support the gold prices.

YOU MAY LIKE
Prev：BlueCity, China's Top LGBTQ App Operator, Files for $50 Million IPO Next：Yes, the Waterfall Selling in S&P 500 Is Over Now