A bear market that shaves off almost 40% of the S&P 500 value in six weeks? It just happened, and we're in a bull market now. 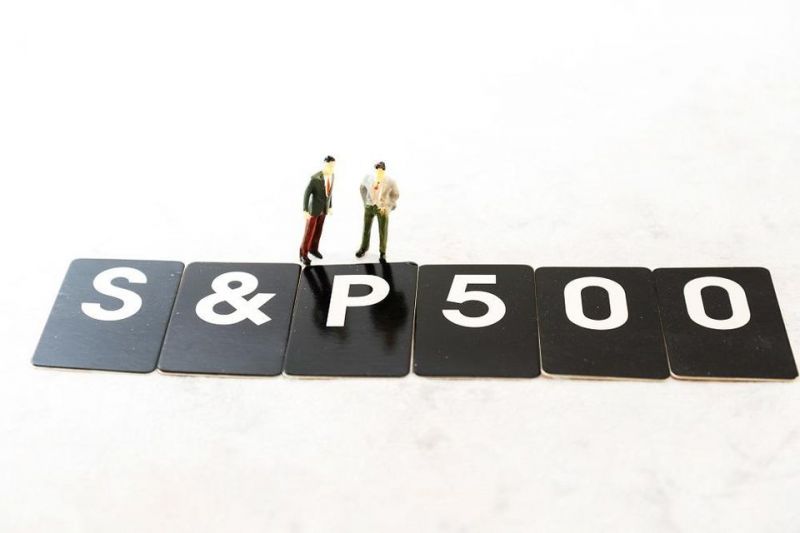 You may ask whether the S&P 500 rebound has stalled, or is that just a healthy consolidation – to which I would reply that the market is merely digesting gains from its sharp upside reversal. In the battle of narratives, the corona second wave fears still play second fiddle to the recovery hopes, and especially the many programs that push for it. Can the aftermath of today's unemployment claims derail the unfolding stock upswing? Again, I don't think so.

Yes, I think that the grind higher in stocks remains on – sometimes slow, and sometimes not so slow. 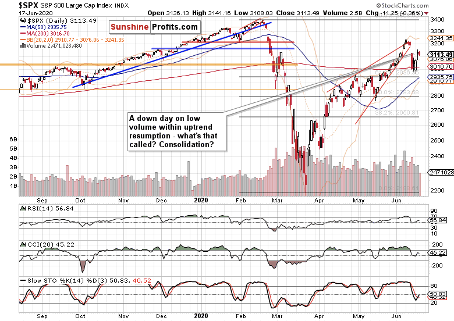 The stock bulls continue enjoying the upper hand, and yesterday's red candle doesn't really change that. The volume says there is no conviction in the drive for lower prices. True, it might look superficially convincing to the bears, especially coupled with Tuesday's upper knot.

But to me, this is just establishing a higher base after yet another decisive Fed move. Make no mistake, buying individual corporate bonds is huge – they can sit on the Fed's balance sheet for as long as the central bank wants them to. After the many instruments on their table already, this is just as close to buying stocks or their ETFs outright as it gets. By the way, Bank of Japan already does that, and the Fed might follow one day.

The daily indicators are positioned constructively for the stock upswing to continue – at this point, I am waving off concerns that they might show bearish divergences by making lower highs next. A pattern in progress is just that – not completed. And besides, the other considerations have the potential to overweigh that.

Look how far the bears got with the bearish wedge breakout invalidation and the island top reversal – the consequences have overwhelmingly played out already. True, we're in the summer doldrums for stocks – and I earlier called for quite some sideways trading over this month. I continue to think that this would serve just to build a strong base, a launchpad if you will, to catapult stocks higher when they're ready for such a move.

These were my yesterday's points about the momentum:

(…) The speed with which prices cleared the 61.8% Fibonacci retracement, is lending credibility to the bull market thesis. It's not unexpected that a sharp plunge of Thursday's caliber gives way to a brief consolidation that attempts to move the market either way, eventually followed by a similarly sharp rebound. That's a fitting description of what we have seen on Monday and yesterday.

But how come the overnight S&P 500 price action still has the downside flavor to it?

In light of the above, it's encouraging to see that the S&P 500 recouped its overnight losses. Encouraging and not at all unexpected, that is. The technicals remain arrayed behind the stock bulls.

Moving back below the 3100 mark in the runup to the unemployment claims doesn't change that. I think that the market will yet again shake off another 1,000K+ figure, and focus on its interpretation of the overall jobless claims trajectory and way less than bad Philly Fed Manufacturing data during the regular trading session.

What would the credit markets say to my bullishly leaning opinion? 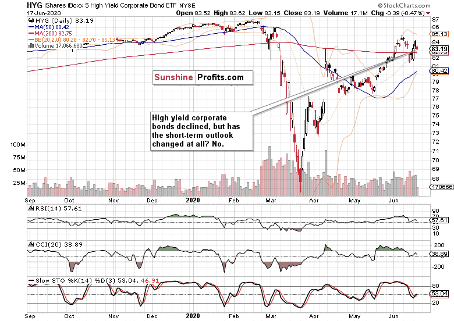 High yield corporate bonds (HYG ETF) moved lower yesterday, but what about the volume? Who would trust such a low one to base one's short- or medium-term trading decisions on it?

Take a look instead at the sizable early April gap and the trading action that followed next. There were some downside moves, yet amid generally rising stocks. And what about the mid-May non-confirmation as the HYG ETF moved lower while stocks more than held ground? While we're not at such an advanced stage of Monday's Fed move digestion, it pays to remember that lesson already. 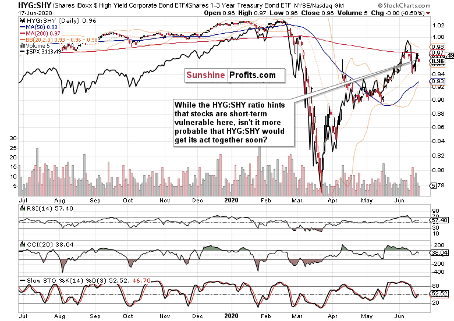 A picture speaks a thousand words – high yield corporate bonds to short-term Treasuries (HYG:SHY) is indeed getting a bit ahead of stocks in their downside move. While we're at the opening phase of absorbing the Fed's decision, I continue to think this will serve well the higher base-building efforts that would launch stocks higher in the future. I certainly don't think we're rolling over to a new bear market with the power to approach the March lows. 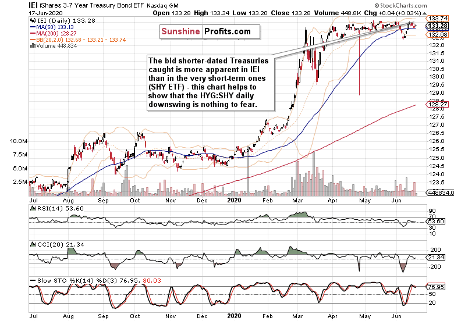 The short-term Treasuries' chart (IEI ETF) isn't breaking to new highs, which would indicate strong risk-off sentiment. This assessment is more pronounced when looking at long-dated Treasuries (TLT ETF), and can be reasonably applied to the very short-term ones (SHY ETF) too.

In short, the bond markets aren't questioning the recovery storyline, and are still more sensitive to the money spigots than hair-raising corona stories. I'm not arguing for a V-shaped recovery here, I just think that "less bad" is the new good, as stocks are bought amid the prevailing real economy uncertainties. Just when and how much will it rebound in light of massive stimulus efforts remains to be seen. 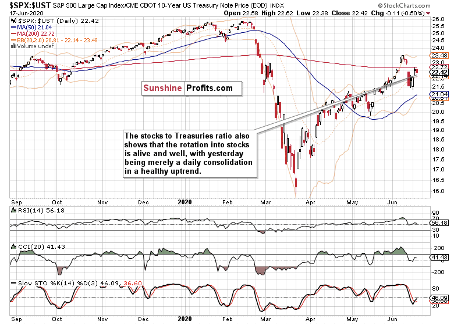 The stocks to Treasuries ($SPX:$UST) ratio confirms the above, revealing that we're still in an uptrend. In other words, the stock bull run has legs, and all we're witnessing is a short-term consolidation after the ratio got taken down a peg or two on Thursday.

Needless to say, the action remains healthy despite the many clouds on the horizon, and I think it'll translate into what bull markets do – they keep climbing a wall of worry.

Q: Market correction lasts 3 days? And the bear market lasts one month? That's definitely something new for the market. Some people say that this time it's different.

A: If you look carefully at the April and May downswings, that has actually been the case precisely. Sideways trading if not an outright upswing breaking above previous local highs, is what followed. I've been saying that market action which decades ago took months or weeks, takes weeks or days in our era. With our markets being increasingly AI-driven, the everlasting human emotions of fear and greed are taking a shorter path in being reflected in prices.

A bear market that shaves off almost 40% of the S&P 500 value in six weeks? It just happened, and we're in a bull market now. Or can you show me a single instance of when stocks overcame the 61.8% Fibonacci retracement off their lows only to plunge below them later again, apart from the post-WWII bear market? There are none.

Summing up, despite yesterday's pause, the risk-on sentiment appears set to return as the credit markets keep discounting Monday's Fed move, and are actually non-confirming the stock upswing on a very short-term basis. But we've seen similar behavior with the April $2.3T bombshell already, which is why the S&P 500 has a solid chance of extending gains down the road. Treasury yields aren't questioning the rebound story as a buy-the-dip mentality in stocks keeps having the upper hand regardless of the perils and uncertainties.