COMMENTARY: China Tries to Show It Can Fight off a New Outbreak

New coronavirus surge in Beijing may be under control, thanks to fast, strong measures that include mass testing and contact tracing - a big contrast with U.S. 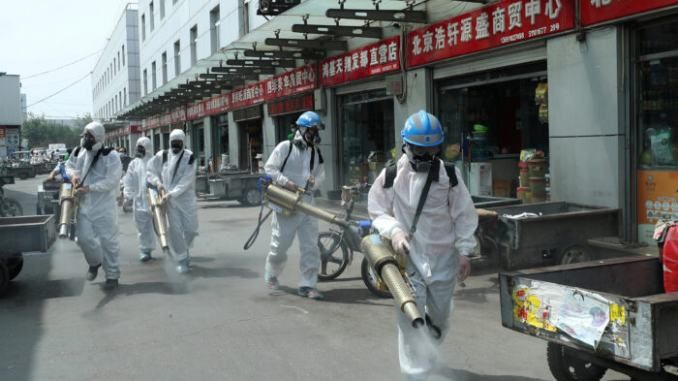 With the central government on practically a wartime footing, trying to control a new outbreak of coronavirus in Beijing, the world's eyes have returned to China – and for good reason. Until this week, China represented a model of beating back the disease, limiting the spread in a country of 1.4 billion people where the virus first erupted late last year. Beijing, a city of 21 million, had not seen a new case in eight weeks.

The coronavirus has infected more than 8 million people worldwide, with a death toll climbing toward half a million. More than a quarter of those numbers have hit the United States. The U.S. - unlike China - did not lock down for long enough and is now seeing resurgences pop up all over the country.

Beijing is the political and cultural heart of China and was thus among the last to lift restrictions as the country finally opened up. If they can't keep the virus out in such a symbolic place, what are the chances of recovery in much more free-wheeling Western nations – including one where the president holds rallies that pack tens of thousands of people close together for no good reason?

As of Thursday, a total of 578 locally confirmed cases were reported in China's capital city, with nine deaths, the Trivium economic research group reported. This is a country that had been counting no new indigenous cases. The economic repercussions were immediate. Hundreds of flights to and from Beijing have been canceled, as have bus and high-speed train services. Schools and universities, which had just begun to reopen, now are shut down again. Stores and restaurants remain open for now but with increased precautions, and people are urged to work from home.

Travel stocks like Trip.com (formerly Ctrip - Nasdaq: TCOM) fell on the news, as the Chinese people were again forced to curtail their travel planning.

The problem has gone beyond Beijing. Surrounding Hebei province found two confirmed and three asymptomatic cases – all related to the Beijing infections, the China National Health Commission reported on its website. Tianjin, a city of 10 million southeast of Beijing, confirmed one new case – without an obvious infection source.

Local authorities wasted no time, launching action that shows the difference between China and less authoritarian countries. Hebei banned all traffic from entering or even going through the Xiong'an New Area, where the two new cases were confirmed, according to Trivium. It said authorities in Tianjin traced 93 close contacts to the newly confirmed case and put them into immediate isolation.

In Beijing, a massive campaign was launched to trace and test the 356,000 people who, officials say, have been to the Xinfadi wholesale food market – site of the outbreak - since May 30, have had close contact with someone who has gone there, or live nearby, The Economist reported. How were so many people found so quickly? At least partly through the use of smartphone location data - something that would not occur in the U.S. over privacy concerns.

Meanwhile, two officials of Fengtai District, site of the Xinfadi market, were fired "for misconduct in office during epidemic prevention and control." The manager of the market, which was the biggest source of Beijing's fruit, vegetables, meat and seafood,  has also been sacked. The surrounding neighborhood and dozens of others have been designated "high" or "medium" risk, meaning their residents are not allowed to leave the city, The Economist said. Other Beijingers can leave only after securing a negative test for the coronavirus.

Smaller coronavirus clusters have been seen in other parts of China, with similar tough measures imposed to stamp it out. It's these type of draconian measures that got China to where it was before this week – virtually free of the virus, at least seemingly.

Now epidemiologists think the virus may have been lurking quietly amid all the measures to stop it, waiting for a chance to re-emerge as restrictions were lifted. But there is another theory, and it, too, has an economic cost.

Salmon has been pulled from supermarket shelves all over China, and officials are warning the public not to consume the increasingly popular fish. Why? The virus was traced to a fish-cutting board in the Xinfadi market.

Scientists have their doubts that frozen fish can carry the coronavirus, but consumers are taking no chances. That endangers the $700 million in annual salmon exports from Denmark, Australia, Norway and other countries to China – a number that has grown quickly in recent years as more Chinese people eat the omega-3 acid-rich fish.

In any case, by Thursday China's chief epidemiologist was pronouncing the outbreak under control, with only 21 new cases in Beijing that day, compared to 31 on Wednesday. Further inspections should be "sporadic," said Wu Zunyou of the China Center for Disease Control and Prevention.

If he is right – and that's a big if – China will again have fought a successful battle against the virus, perhaps preventing a second wave. Compare that to the U.S., where Dr. Anthony Fauci, America's best-known virus expert, has said we can't worry about a second wave in this country because we haven't escaped the first wave yet.

YOU MAY LIKE
Prev：COMMENTARY: Senate Report Raps FCC for Failure to Monitor Chinese Telecoms Next：COMMENTARY: India’s Ban on Chinese Apps Raises the Stakes in Tech War