Headlines warn of big crash as happened five years ago, but history seems unlikely to repeat itself as economy steadily perks up and country’s retail investors spark buying.

As China's big stock market rally heated up this week, headlines in the West took on an increasingly alarmist tone: "Chinese regulators sound alarm as stock market frenzy gathers pace," wrote the London Independent. "Bulls in China markets spark 2015 fears," headlined an Investopedia story. "Is the Chinese stock market headed for a repeat of the 2015 crisis?" asked the National Review.

Such concerns are understandable. The last time Chinese stocks went on a rampage, the Shanghai Composite Index rose 150% in one year before collapsing hard and fast in the summer of 2015. For the past two years, it has struggled to tread water above the 3,000 level, but suddenly there is life.

China's bull got full attention from the rest of the world on Monday, when the Shanghai Composite leaped 5.7%, its biggest single-day gain in five years. And it continued rising until Thursday. 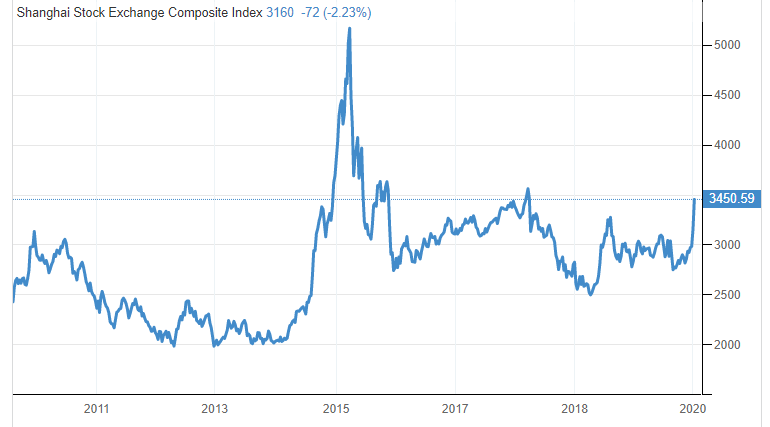 There are several big differences between 2015 and now that should give this rally some legs. For one, the market is starting at a much lower valuation than the current rally in the U.S. Where Wall Street lost about a third of its value in the face of the coronavirus pandemic earlier this year, markets in China spent years languishing at less than half the value of the 2015 peak, which reached 5,166 on the Shanghai Composite.

Bloomberg noted that while more traders are taking on debt to buy shares, "leverage in the stock market is about half of what it was at its peak five years ago."

Secondly, Chinese regulators continue to modernize the country's capital markets. On Tuesday, Xiao Gang, former chairman of the China Securities Regulatory Commission, told a financial forum in Shanghai that the party "has never attached so much importance to capital markets as it does today."

Saying that a nation's power depends on its capital markets, Xiao cited the registration-based IPO system, financial opening and corporate governance as key among areas that need reform.

An editorial in the state-owned China Securities Journal likely helped push the rally that accelerated on Monday, as it said that investors should look forward to the "wealth effect of the capital markets" and the prospect for a "healthy bull market."

Don't forget there is also this little thing called the coronavirus. Though it had less data to go on because it was the origin of the outbreak when nothing was known, China managed to stamp out virtually all of the virus and is now in full economic recovery mode. China's economy still faces plenty of headwinds, of course, such as the global slowdown, a brewing cold war and decoupling with the U.S. and high debt levels, but it also has forward momentum.

Since the depths of the pandemic-induced recession, China's total economic capacity is operating at nearly 88%, based on the Trivium National Business Activity Index. Some 30 provinces, which account for 95% of China's GDP, are reporting full resumption for large businesses.

The stock market is starting to catch up to that. In the U.S., the market has gotten far ahead of the economic fundamentals. It is looking ahead to recovery from coronavirus and businesses reopening, but look at what's happening: America couldn't wait. We are an impatient, independent-minded people - many of whom don't like the government telling us what to do. Now that is biting us.

The pandemic is raging fully out of control, the president is in complete denial and doing worse than nothing about it, and businesses are being forced to close again. Five months into the outbreak, we still don't even have sufficient testing and contact tracing.

This disease continues to kill and maim people and will continue to do so until we have a widely available vaccine. Many hundreds of thousands likely will die in this country. That is not a recipe for a healthy economy or stock market, except perhaps for healthcare stocks and technology that allows people to work remotely.

Also, keep in mind that the stock market in China is driven mostly by retail investors, unlike the institution-driven markets in the U.S. and Europe. Herd psychology matters, and right now the people are excited about the stock market.

Others are more tempered in their enthusiasm. Cindy Hu, a middle-class investor in Shanghai, told me she is hopeful but careful.

Hu has switched her allocation from healthcare and food stocks to financials and property management, and she also said she sees big blue-chips like Alibaba (NYSE: BABA; HKEX: 09988), Tencent (OTC: TCEHY; HKEX: 00700) and JD.com (Nasdaq: JD; HKEX: 9618) rising "due to the good development potential of the Chinese economy."

This time, China's bull market looks likely to last a while and not fall back so precipitously.

"It's very unlikely for us to go through the boom-and-bust like we experienced in 2014 and 2015," Dai Ming, Shanghai-based fund manager at Hengsheng Asset Management Co., told Bloomberg News. "The market isn't flooded with money everywhere like last time. Beijing is still very prudent with its monetary policy."

It's easy to look at the problems facing Beijing's policymakers and conclude that the market rally will fade. But over the next year or maybe two, I'd put my money on bourses in Shanghai and Shenzhen over those in New York.

YOU MAY LIKE
Prev：COMMENTARY: India’s Ban on Chinese Apps Raises the Stakes in Tech War Next：COMMENTARY: Will China’s Bull Resume, Along With GDP Growth?