Investors have turned their backs on gyms in favor of Peleton and Nautilus. 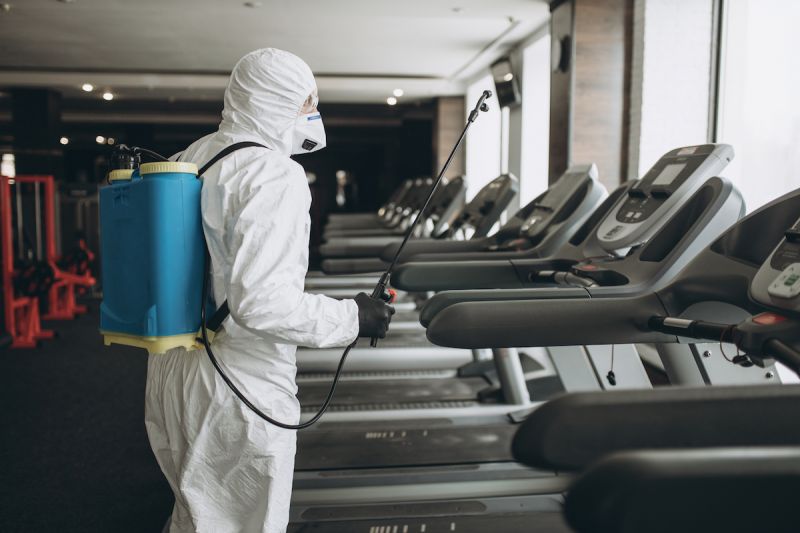 While some gyms across the United States have started to reopen, it remains one of the most hard-hit industries during the pandemic.

Weighed Down by Debt

Just last month the gym chain 24 Hour Fitness filed for bankruptcy. While the chain permanently closed 100 US locations, it secured $250 million in funding and anticipated in its Chapter 11 filing that most of its approximately 300 clubs remaining would reopen by the end of June. Gold's Gym also filed for bankruptcy earlier in May.

But empty profits and weight benches haven't been the only problem for gyms. Some have faced lawsuits for allegedly charging members during closures. Of those gyms alleged include 24 Hour Fitness in California, La Fitness in California, and publicly traded Town Sports International Holdings, Inc. (Nasdaq: CLUB).

As gyms have closed under quarantine, people have looked elsewhere for a good workout.

As a result, fitness equipment makers have been in high demand. Also, companies that engage in selling bodybuilding supplements share a similar fate as gyms and have not enjoyed the outbreak of Covid-19.

Take a look at Planet Fitness, Inc., (NYSE: PLNT) which has held a 20% market share of the U.S. of the gym membership space, according to the investing community in Seeking Alpha. While the New Hampshire-based company has watched its stock take a considerable hit after being ordered to close, things have begun improving.

After the forced closures, Planet now has around half of its more than 2,000 clubs in North America, and the Caribbean reopened. On June 2, when Planet had 800 of its gyms reopened, it reported a club usage rate of roughly 60% since reopening compared to the same period in 2019.

At the reopened locations, "overall average membership levels have remained relatively consistent compared to the day the store reopened, while both joins and cancels have increased compared to the same time period last year," Planet said in a filing with Securities and Exchange Commission in early June.

Not that this will come as a huge surprise, but Planet's revenue in the first quarter plunged 15% year-over-year to $127.2 million on a net income of $10.4 million, representing a tumble of 67%.

In the last month or so, Planet's stock has been extremely volatile. When it was looking like Planet's stock left the basement and hit a 14 week high of $80.60 per share on June 5, things took an unfortunate turn for the company as Covid-19 cases across the U.S. started to spike at record rates. The stock is now trading below $55 per share, down nearly 27% year-to-date.

But that was always the risk governors ran when they rushed to reopen. Shareholders are likely in for not only a challenging second quarter but a bumpy year.

While it does not appear that it's in any danger of shutting down for good, perhaps the coronavirus will force some states to roll back reopenings. The stock in Planet is a hold.

Another gym operator to look at is Town Sports. Unlike Planet, the impact of Covid-19 has taken the parent of New York Sports Clubs and Lucille Roberts gyms stock to trading just pennies, resulting from closures across the U.S.

But that's not all for the New York-headquartered company, as it warned in an SEC filing in June that it could follow 24 Hour Fitness and Gold's Gym's footsteps in filing for bankruptcy. To support the funds for a bankruptcy filing, Town Sports will need to raise up to around $80 million in financing. The company claimed that it was "facing significant debt maturities in the near term," and had insufficient cash.

To preserve what little cash they do have, Town Sports laid off a chunk of its 7,000 employees and stopped making rent payments. As a result of the unmitigated disaster for Town Sports—Its stock is now trading under 50 cents per share. While Covid-19 certainly didn't help, the stock has been on a downward trend since hitting a high of $14.85 in July 2018. Also, as we noted before Town Sports is facing lawsuits for charging memberships during closures. Even though it said it would freeze all memberships, investors will want to consider this when looking at Town Sport's stock.

While we are still talking about bankruptcies, it would be rude to not mention health and nutrition products provider GNC Holdings Inc. Last month, GNC filed for bankruptcy and said it plans to close up to 20% of its stores and is looking for a buyer.

Sales for the chain had already been on the downslope even before Covid-19. The pandemic put the company in ruins, as it reported a net loss of $200 million in the first quarter. According to CNN, it has been troubled with nearly $1 billion in debt.

Following the bankruptcy filing, The New York Stock Exchange moved to delist GNC from its bourse. GNC ended at 55 cents per share and now trades over the counter under the code "GNCIQ".

Gyms are more than likely on a temporary decline, as working out from home is on the rise. As consumers bring gyms to their homes, one company seeing a high demand is Peloton Interactive, Inc. (Nasdaq: PTON).

To say the least, investors have given the exercise machine and fitness class provider's stock a workout this year. In the fiscal third quarter, Peloton's revenue rallied 66% year-over-year to $524.6 million. However, its net loss widened to $55.6 million versus $38.6 million in the same period in the preceding year; the company attributed the higher losses to "non-recurring litigation and settlement expenses in the quarter."

In late June, Cowen analyst John Blackledge raised his price target on the stock to $70 per share, citing Peloton's ability to operate as a direct to a consumer tech firm that leverages the internet.

"Peloton is the clear leader in connected home fitness," he told clients in a note.

Blackledge continued, "And their lead is widening as they ramp over time from >1,000 hours / month of fitness content in mid-19 to their goal of around 1,500 hours / month, including newer verticals like strength training, yoga, outdoor, and family-oriented exercises, among others."

If you're a shareholder, there's a lot to be optimistic about; the company expects its subscribers to jump in the range of 1.04 million and 1.05 million for the year, up from the previous forecast of between 920,000 to 930,000. At $61.58 per share, Peloton is a buy—and with shares up a whopping 113% YTD, expect to see more gains where that came from.

Meanwhile, the surge in Peloton's stock has been nothing this year compared to a fellow fitness product maker Nautilus, Inc. (NYSE: NLS). The stock has taken off since its announcement in early April, anticipating its sales would rise 11% in the first quarter from the same period last year to $94 million.

Since Nautilus's close on Apr. 9, it has now skyrocketed nearly 350%. The Vancouver-based company has also watched its stock gain for just being a byproduct of the emerging home fitness sector. After the apparel retailer, Lululemon Athletica Inc. (Nasdaq: LULU) struck a deal to purchase the at-home fitness firm Mirror for $500 million, the stock in Nautilus jumped from $9.27 per share to now trading at $10.28 per share. But that's not all that happened, Roth Capital raised its price target on Nautilus to $13 per share. The news of the acquisition also helped Peleton as it leaped from trading at $57.77 to now $61.58 per share.

George Kelley, a four and a half star analyst at Roth Capital said of the new landscape, "There are 70mn gym subscribers in the U.S. and we estimate that boutique fitness was >$10bn pre-COVID. Many equipment providers can thrive as consumers opt out of traditional gym memberships."

As we look ahead, there's reason to have a considerable amount of faith in Nautilus. While It did not provide an outlook for the next quarter, I would wait until the stock falls back down to $10 per share before buying.

Gyms aren't the greatest place to be operating in right now, even as they are starting to reopen. Putting aside the bankruptcies, gyms may not start packing in again until Covid-19 entirely goes away. The chances of closing again due to record-setting coronaviruses cases and an inability to keep gym-goers safe remains an issue.

Working Out Unmaksed Is Hard Enough

Guidelines vary by state, but mask-wearing has been an uphill battle in some regions despite its effectiveness in stopping the spread. According to 9Health Expert Dr. Payal Kohli, masks can cut the risk of infection by 85%.  Yet many people, despite its effectiveness, don't even like to wear masks outside, let alone while working up a sweat an in indoor gym.

"I would be less worried about the jogger who is running past you for a split second and more worried about the person who's working out next to you without a mask for half an hour," Dr. Nikita Desai, a pulmonologist with the Cleveland Clinic said, as cited by the NPR.

According to a study posted in June by the athletic shoe review site RunRepeat that surveyed 10,824 respondents with gym memberships globally, Americans (50%) were the least likely to return to their gyms upon reopening. Regardless if masks are mandated, this is a no-win situation for gyms until the pandemic is no longer a threat. Some will not go without required masks, others will not work out in masks,  and many won't enter gyms until it's safe to avoid social distancing.

A Market with Some Real Weight

According to the International Health, Racquet & Sportsclub Association, (IHRSA) fitness is a $34 billion industry—a projected 20% of Americans belong to a fitness club.

It is tough to say when people will feel safe inside the gyms again. But in all likelihood, for the rest of the year, home fitness providers should continue to see high demand, despite their heavy cost. I recommend buying stocks in that sector as opposed to purchasing shares of gym operators for the short to mid-term. Once a vaccine for Covid-19 is developed, people will be back in the gyms, and those stocks will rise. The difference between $10 a month or $2,245 for a Peleton plus a $39-per-month membership fee for the streaming content and iOS or Android app (obligatory for the first year) is just far too great.

Even the best and fastest home-fitness cycling machine can't close such a wide gap.