We Can’t All Be Robinhood. Will a New Sheriff Fix What’s Essentially Wrong in Nottingham? 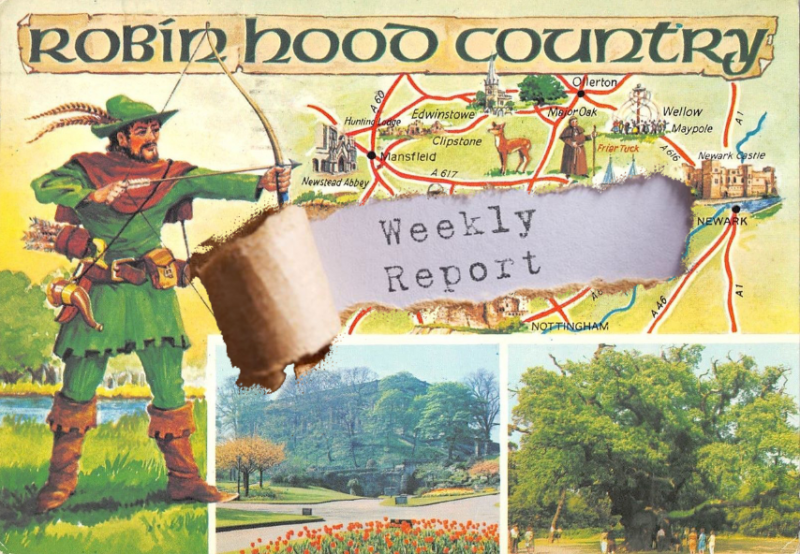 Noun: a thing of absolute importance.

It is a word we have heard quite a bit over the last few months. As Covid-19 cases rise in the U.S, in part due to an administration unable or unwilling to implement—or even conceive of—a coordinated response, odds are we will continue to hear it for some time. But when this is over and we return to something closer to the old normal rather than the new, let us not forget what this word means. More importantly, let us not forget the people who do the work befitting of its definition.

What is considered an "essential" business has varied from state to state with some controversy. But, for the most part, everyone agrees that firefighters, nurses, paramedics, store clerks selling groceries—are all essential while, for example, waxing philosophical in a financial column about the meaning of "essential" is not. Nor is most of the work that most of us do.

"Who are the essential workers?"—asked comedian and cultural icon John Stewart in an interview this week. They are, he answered, "the most poorly compensated people in our society."

The cashier at the bodega down the block from me is an essential worker. If I run out of toothpaste, I do not run to a hedge fund manager. And yes, maybe that hedge fund manager invested a lot in the toothpaste company I prefer, but you get the point. (Toothpaste is essential for me, as I was riddled with cavities as a kid. No, Mom, 12-year-old boys should not make their own dental appointments.)

If history is any judge, these essential workers will be forgotten. They are like Olympic athletes: Once every few years when they are at the front and center of our consciousness, we pretend to care. When they are out of sight, paramedics, like gold medal-winning shot-putters, are out of mind.

A New Sheriff in Town?

With Biden far ahead in the polls even in the swing states, the hope is that Sheriff Biden, if elected, will help rebuild the middle class and restore dignity, if not reverence, to these essential workers in both good times and bad. For we are on the verge of becoming Robin Hood's Nottingham, a kingdom of lords and peasants. But it wasn't always medieval times in America.

Yet that granite foundation erected in the late 1940s has turned to sand. To wit, 63% of Americans are unable to cover an unforeseen $500 bill. And as for black Americans, often left out of the mid-century middle-class wealth-building project altogether through redlining, deed convents, a drug war, and less formal discrimination, they are not standing on sand; they're standing on quicksand.

As the tech bubble deflates and the Dow rises (4% in the last two weeks; my Index rose over 7%, as illustrated in the chart below), we return to the big, essential businesses where value will be found in the next six to eight months. As for investing in the essential workers themselves, here's hoping a new sheriff will pay these people something closer to what they deserve. If you want to invest in those even further left behind, try "banking black," particularly if you are not compelled to brave the New York humidity to stand, even masked, side by side, and chant for change. I'm a deeply committed progressive, but a more deeply committed paranoid.

Black-owned banks Broadway Financial (BYFC) and Urban One (Nasdaq: UONE) saw surges on Juneteenth, and have since fallen, but liquidity has continued in both stocks. These stocks and other publicly-traded black-owned banks and businesses should see another pop in November. They should and fare well under Sheriff Biden, even if he doesn't pass the reparations he ostensibly supports. (North Carolina just passed its own reparations this week.)

If Trump wins, well, at least you have an intraday trade on Kwanza to look forward to.

More than an essential business, a vaccine is essential for getting us back to business. Regeneron, Novavax, Pfizer, Gilead—I have recommended them all, but I still think, while overvalued on optimism, Moderna (Nasdaq: MRNA), which I never sold in the index, is the one to get us there first.

Food and Just About Everything Else

Amazon is never a sell and nor is Walmart. These two companies have shown themselves to be essential, despite how inessential they make their essential workers feel. When Walmart forays into episodic television and robot greeters (no word on this yet), maybe you can sell Amazon and double down on (NYSE: WMT).

This is an industry perhaps more than any other (besides alternative energy), which will be affected by new laws passed by a new sheriff. Nothing is more essential than health care, as this virus constantly reminds us. Health care and health insurance stocks that rose on Biden's Super Tuesday rout were United Health Group (NYSE: UNH) and CVS Health (NYSE: CVS).

Of these, CVS is my favorite, an essential clinic in a pharmacy whose locations will just get more ubiquitous over time.

Biden will also hard on China, make no mistake. While the perception of Biden as weaker on defense will send stocks downwards temporarily closer to and after his election, China-U.S. tensions are structural and aren't going away. Expect more posturing particularly over Taiwan as well as the South China Sea well into the next presidency. And then there is Russia, whose increasing internal weaknesses will be broadcast through an increasing show of external force.

Of defense stocks, I like General Electric (NYSE: GE) a company that has long been more about aerospace than lightbulbs. At around $7 per share, expect this to come close to doubling in the short to mid-term. But it will be many, many months until it is back at the $30 level. Long-term (12 to 24 months years), NYSE-traded Raytheon (RTX), Northrup Grumman (NOC), and General Dynamics (GD) are all essential bets.

No matter who the sheriff, to return Nottingham from the rotting sandcastle to a granite-grounded structure built to last, major infrastructure investment is essential and will be passed. Vulcan Materials Co. (NYSE: VMC) stands to benefit big time, and at $124 per share, it is still down $30 or so from its pre-virus levels. A long-term play worth playing.

So many choices, but go with Brookfield (NYSE: BAM), down $10 still from its pre-virus levels the diversified company will fare well irrespective of which sheriff is in charge. Also, Caterpillar (NYSE: CAT) is on a roll and will creep up more; the company is essential to the global economy. Betting on this international sales-driven stock is a bet on an eventual world rebound.

Chips are now essential, although I am not about to stand outside the headquarters of a semiconductor company and applaud board members. Voluntarily delisted last year from the NYSE, China's Semiconductor Manufacturing International Corp. (HKEX: 00981; OTC: SMICY), raised $6.6 billion in the days preceding its public debut in Shanghai – more than double its initial target. Buy it there through an index (the STAR market index is coming at the end of July), or buy the stock itself in Shanghai. But don't buy it on the OTC, where it plummeted.

Taiwan Semiconductor Manufacturing Co. (NYSE: TSM) is still the biggest player in the space, and just like the island itself, it will be in the crosshairs of a tech cold war that will only heat up. TSMC is a buy (added to the index July 6). Second-quarter net profit rose 81% from a year earlier thanks partly to higher revenue and a better margin.

As for China stocks, just buy stock in every IPO in Hong Kong, the U.S., or the mainland, and sell midday—and you are just about guaranteed to do well.

Harley Davidson: Far from essential, but it is as American as can be. The stock has risen from $20 when I recommended on May 8 to around $30. I liked Ford (NYSE: F) the bottom of its crash March 20; it now trades at $6.86 per share and it is a buy. Essential transportation stock Union Pacific Corporation (NYSE: UNP) is almost at its pre-virus highs but cost-cutting measures might improve earnings in Q2 and is a buy long-term. For a shorter-term railroad stock buy Canadian Pacific (NYSE: CP). Shares are up 1.69% over the past week while the Zacks Transportation - Rail industry is down 1.64% over the period.

Regarding less essential transportation stocks, Tesla (Nasdaq: TSLA) is a hold; wait to see what the next two weeks bring. Chinese competitor, NIO (NYSE: NIO) had a great run and is now dipping. Analysts say it is going back to $7 per share. Stay away for now. Nikola (Nasdaq: NKLA) will dip further also; wait to pick that one up. Finally, China-based Li Auto's IPO is coming soon on Nasdaq under "LI." Buy and sell that day for a quick profit.

Okay, this is debatable. But turns out weed candy, in admittedly baby doses, is my friend after a long hiatus from marijuana usage. Canopy and Aurora have long been picks, the former being the market leader with billions and billions of dollars in backing. Alphira (Nasdaq: APHA) popped this week in part on rumors that it will merge with Aurora in what would be a game-changer. Alphira is a buy.

The panacea to the boredom of the pandemic also goes good with weed. The stock will fall and rise but rise more in the end. After dipping on less than expected new subscribers, it is now time again to look again. If it falls more Monday, consider picking it back up.

How Many Robinhoods Can Fit in Nottingham?

In the most recent quarter, Robinhood.com users traded 40 times as many as customers at Charles Schwab customers, according to The New York Times. While learning to trade is a good thing, the average Joe should not bet the very house in which he shelters-in-place. Fortunes have been made and lost—and so have lives.

Alex Kearns, 20, a college student in Nebraska, did himself in after he saw his account drop to negative $730,000 after a wildly speculative trade. Of course, he didn't lose that much as the trades were incomplete and his account hadn't shown his updated balance. Whoops.

Maybe that's where we are headed eventually, irrespective of the sheriff in charge. Maybe the Not-So-United States of Nottingham will just get worse as the robot lords take over and forever replace human workers, even those once deemed essential.

If that's the case, then keep the stimulus checks coming post-virus so the average Joe has more in his quiver to trade Amazon, Walmart, and the few other companies left after all the other stores close for good. If there are to be no more tradespeople, let there be people who trade.

But we all can't be Robinhood, can we? An existentialist would say yes, "existence precedes essence" and all that. We are what we choose.

And so, I chose to sign up for Robinhood.com. This despite being a longer-term value investor, historically wary of this kind of short-term speculation— like the options I'm now trading.

Either way, it won't matter in Nottingham. Truth be told, neither myself nor my Index is essential.

That said, here it is...(for daily trade updates and momentum plays email me to subscribe at gregory.bergman@capitalwatch.com) YOU MAY LIKE
Prev：HSBC Downgrades China Stocks, Shanghai Index Down 5% on Week Next：Get Ready, the S&P 500 Leg Higher Is Getting Underway