Will the Rising Dragon Sink Gold?

If China's economic recovery increases risk appetite, will there still be growth in the golden safe haven? 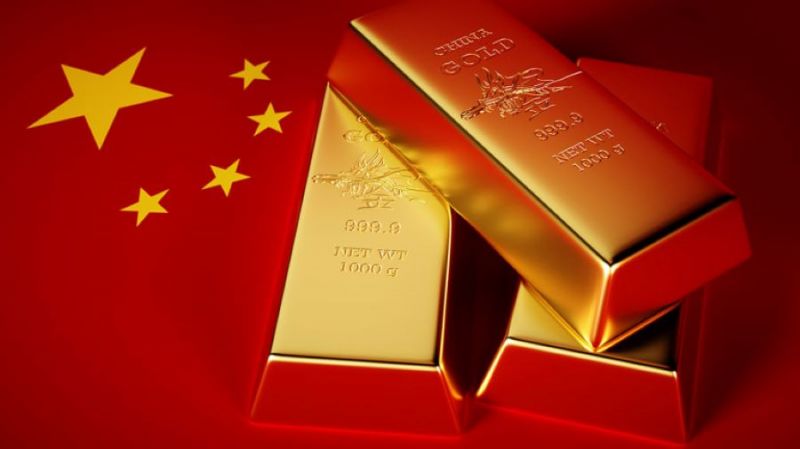 China's economy grew 3.2% in Q2 2020. The expansion was above expectations, but it does not have to sink gold.

Last week, China reported that its economy grew 3.2% year-on-year in the second quarter of this year, following a 6.8% contraction in the previous quarter, as the chart below shows. Importantly, the actual growth rate beat the market expectations of a 2.5% expansion. The number is of great importance also because China is the first major economy to report positive growth after the coronavirus pandemic and the Great Lockdown. So, the Chinese data bode well for the U.S. and other countries, where the epidemic started later. 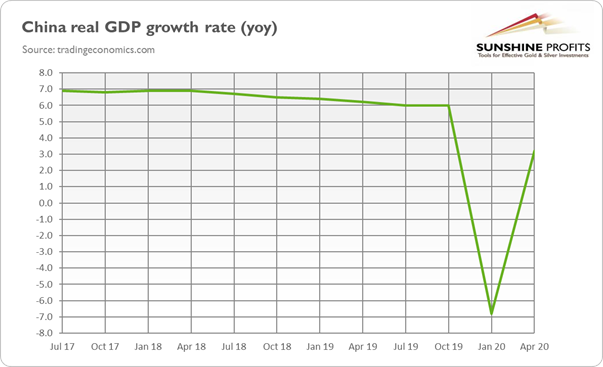 Does it really? After all, there are doubts about the accuracy of China's official reports. Moreover, although the economy partially rebounded, it still contracted 1.6 percent in the first half of 2020. And consumption remains weak in China. Retail sales were down 1.8 percent in June on an annual basis, which is below forecasts. It clearly shows that there are still significant headwinds ahead of the second largest economy in the world and that there is still a way to go for a full and sustainable recovery. So far, the economic revival in China is a story of government stimulus and debt-led rebound. According to the Institute of International Finance, China's total debt rose from 300 percent in late 2019 to 317% of GDP in the first quarter of 2020.

What is important is that China's official data – even if we take it at face value – does not translate so simply into the American reality. The obvious reason is that while China has contained the epidemic (abstracting the second wave in Hong Kong, where a new outbreak forced the authorities to implement the strictest-ever social distancing measures), the U.S. still struggles with the coronavirus, as the chart below shows. 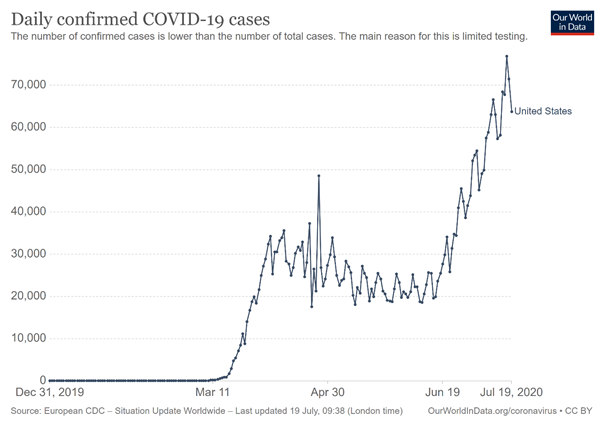 What is crucial here is that not only the number of new cases have been rising in the United States, but also the number of deaths because of Covid-19. As the chart below shows, it has been increasing for several days to reach almost 3 deaths a day per million inhabitants. It is still less than in April, but more than in the previous weeks and significantly higher than in other countries, including Italy. 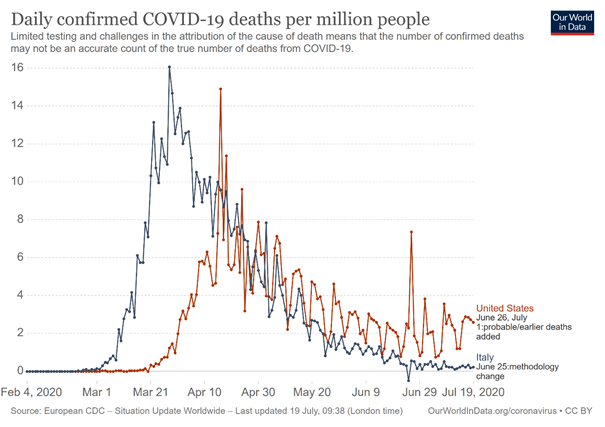 What does it all mean for the gold market? Well, on the surface, it seems that everything is fine. China's economy has rebounded in the second quarter, and America is also on track to recovery. After all, industrial production rose 5.4 percent in June, following 1.4% in May, while the Empire State Index, which measures business activity in New York state, increased 17.2 percent in July from negative 0.2%  in June, crossing back into positive territory.

However, the sad truth is that economic activity remains well below the pre-pandemic level. As we acknowledged earlier, the upcoming data will be very positive because of the very low base. But later data may be less impressive, especially if the new outbreak in the U.S. spreads wider and further reduces consumer spending.

It is, of course, very possible (and we hope for) that the second wave of infections will be eventually contained, just as the first wave was, but until then it may have a negative effect on the pace of economic recovery – and positive on the yellow metal.

So, although positive economic news from China could boost risk appetite, hitting the safe-haven demand for gold, the fundamental outlook for gold prices remains intact. After all, the economic recovery in America will we weaker than in China, partially because of worse epidemiological situation. But even if the pandemic is contained soon, the easy monetary policy will remain in America for years. The U.S. central bankers will remain dovish and more tolerant of inflation. Indeed, just last week, Patrick Harker, Philadelphia Fed President, said "I'm supportive of the idea of letting inflation get above 2% before we take any action with respect to the federal funds rate." It goes without saying that such ideas are supportive for gold prices.