The news is potentially game-changing for the precious metal. 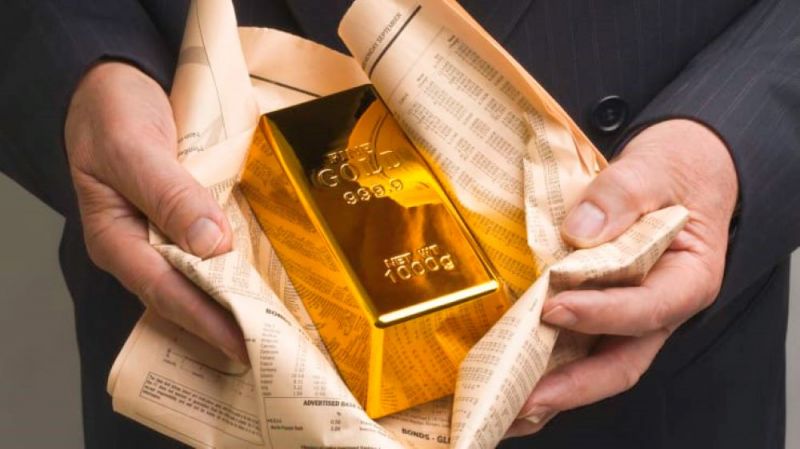 European leaders stroke a historic deal that could be a game-changer and provide support for the euro and gold against the U.S. dollar.

Historic deal. A pivotal moment for Europe. On Monday, the EU leaders agreed on a massive economic stimulus plan, after a long and crotchety summit. If passed through the European Parliament and ratified by all EU states, the European Commission could borrow 750 billion euros to finance the recovery fund and distribute 390 billion in grants and 360 billion in loans across the countries most impacted by the Covid-19 pandemic.

That's breaking news and potentially a game-changer. The stimulus could, of course, help somewhat the European economies, supporting the recovery, but the key issue is that the summit's outcome is an unprecedented act of European solidarity. Some analysts even see the agreement as the first step towards a true fiscal union. It's still far from it, but the recovery fund marks a precedent for common debt financing at the EU level.

Hence, such a strong signal of internal cohesion and solidarity pushed the European equities higher and strengthened the euro against the U.S. dollar. The weaker greenback helped gold to continue its rally, as the chart below shows. 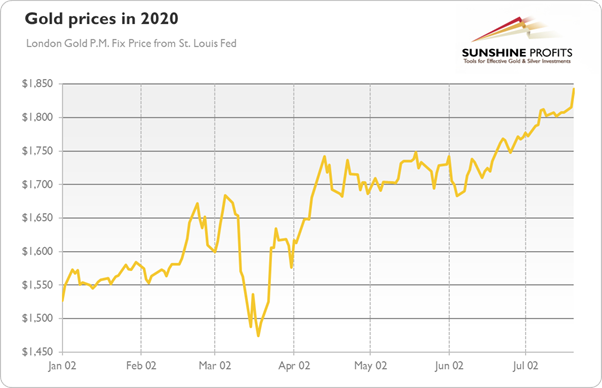 Now, we are waiting for the U.S. to move. The Republicans are expected to deliver the next stimulus package in a response to the coronavirus crisis in the upcoming days. The bill is expected to cost around $1 trillion. The package will likely include second stimulus checks or some form of direct payment, state and local aid, unemployment benefits, and liability protection. However, many details are still unknown, but the bill should be finalized before the Congress' summer recess on August 7, or even until the end of July, when the current federal unemployment benefit program expires.

The bill would provide another round of economic stimulus, supporting the recovery and pleasing Wall Street. As the package would maintain optimism, it should be theoretically negative for the gold prices. However, the first and larger stimulus did not prevent the gold's rally. Or, it could actually support it.

Indeed, gold rallied amid the coronavirus crisis partially because of the authorities' response to the economic collapse. The current level of fiscal and monetary stimulus is unprecedented. The central banks and governments flooded the economies with mammoth liquidity, boosting both the money supply and fiscal deficits. Together with the negative real interest rates, rising public debts and elevated uncertainty, it creates a favorable environment for gold prices.

Indeed, in June, the monthly U.S. federal deficit soared to record $864 billion, as the chart below shows. It implies that with the new stimulus just around the corner, the deficit can skyrocket. According to the Congressional Budget Office's projections from April, the economic crisis would raise the FY 2020 deficit to $3.7 trillion, and the FY 2021 deficit to $2.1 trillion. The numbers might be even worse, given the new stimulus and downside economic risks. Such a fiscal extravagance, although partially understandable in face of the pandemic and the Great Lockdown (but now it's clear that the government should tighten its belt in good times), should weaken the U.S. dollar and strengthen gold. 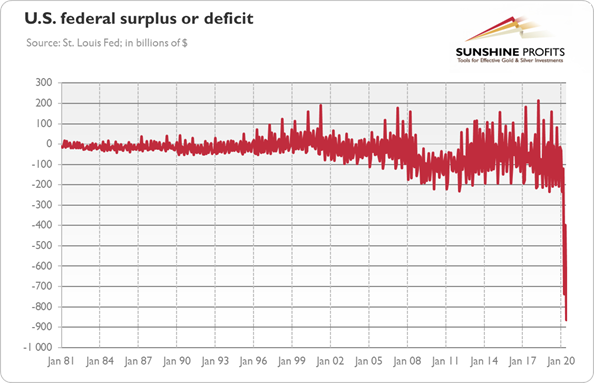 The recent European agreement on the recovery fund and the expected another round of the U.S. economic stimulus make the continuation of gold's bullish trend very probable. Additionally, the EU's unprecedented move to issue common debt on behalf of all 27 members – something that Germany always opposed – could increase the faith in euro, weakening the position of the U.S. dollar as the only game in town, which should also support gold.