The number of people claiming unemployment benefits has recently risen. 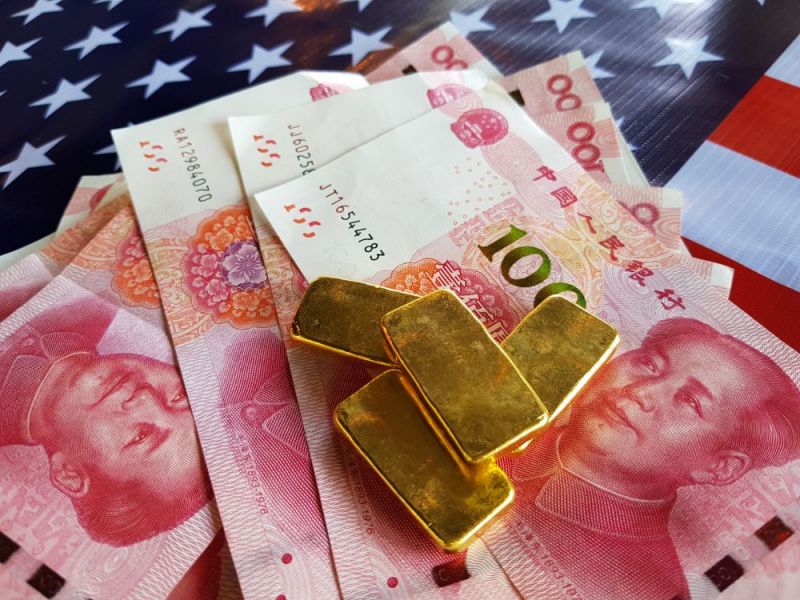 Gold has jumped above $1,850 amid expectations of new stimulus, worries about the pace of economic recovery, and concerns about rising tensions between the U.S. and China.

Houston: We have a problem. And that problem is unemployment. 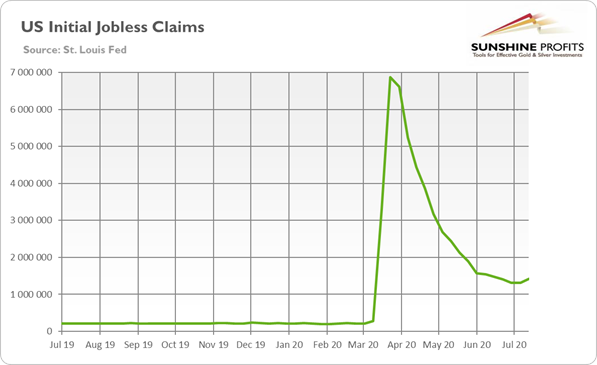 Yes, you are right! The number of people claiming unemployment benefits has recently risen. To be precise, in the week between July 11 and July 18, initial jobless claims increased from 13.1 million to 14.2 million. Yup, instead of falling, they went up! Surely, we should never read too much into a single report. However, the increase in the number of applications for unemployment benefits is not something we should expect during firm, V-shaped recovery. The decline in initial jobless claims was already very sluggish, and the recent reversal in trend will only add to worries that the second wave of coronavirus is slowing down the economy. In other words, the recovery could be more fragile and less vigorous than many people hoped for. As I write in the August edition of the Gold Market Overview, "forget about the V-shaped rebound – the economic recovery could look more like W or like the Nike's swoosh." Indeed, the spread of the Covid-19 makes the V-shaped cycle less likely, while the double-dip recession more probable. Increased worries about the pace of recovery are positive for gold prices. The yellow metal should then gain not only as a safe haven but also thanks to the expectations that sluggish rebound would force the Fed and Treasury to another rounds of monetary and fiscal stimulus.

Geopolitical concerns are another factor that supports gold prices right now. The already heightened tensions between the United States and China have recently escalated to a new level recently. Both superpowers are at odds on almost every front, from still unresolved trade wars to Taiwan, the Covid-19 pandemic, China's human rights abuses in Hong Kong and Xinjiang, and South China Sea. The latter issue has become an flashpoint amid increasing number of naval drills and encounters. On July 13, the U.S. Secretary of State Mike Pompeo signaled a tougher stance, rejecting in a statement most of China's claims to the South China Sea. He said:

And, last week, the U.S. ordered China to close its consulate in Houston, Texas, following accusations of spying. It was called by the Chinese Foreign Ministry an "unprecedented escalation" in recent actions taken by Washington. According to some analysts, the risk of an unplanned confrontation is growing as relations worsen very quickly, which could push both countries closer towards war. Such fears increase the safe-haven demand for gold.

CWhat does it all mean for the gold market? Well, both the increase in the initial jobless claims (against the markets' expectations) and the rising tensions between China and the U.S. are positive for the yellow metal. They fueled the recent surge of momentum that pushed gold prices above $1,850, as the chart below shows. 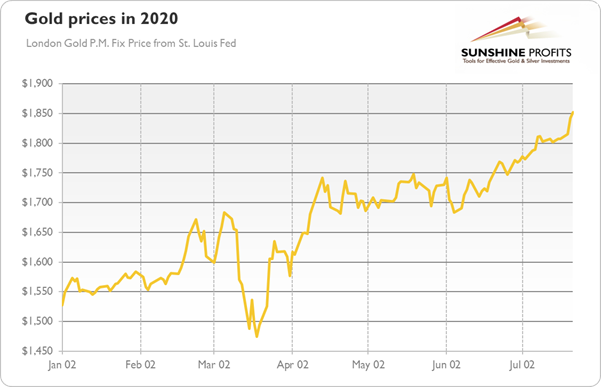 Last week I wrote that low real interest rates, ample liquidity from the Fed and expected new round of fiscal stimulus are driving gold prices further north. The concerns about the spread of the coronavirus and the pace of the economic recovery, as well as worries about the U.S.-China relations can only add to the gold's rally.