The hotel sector may not recover to pre-pandemic levels until 2023. 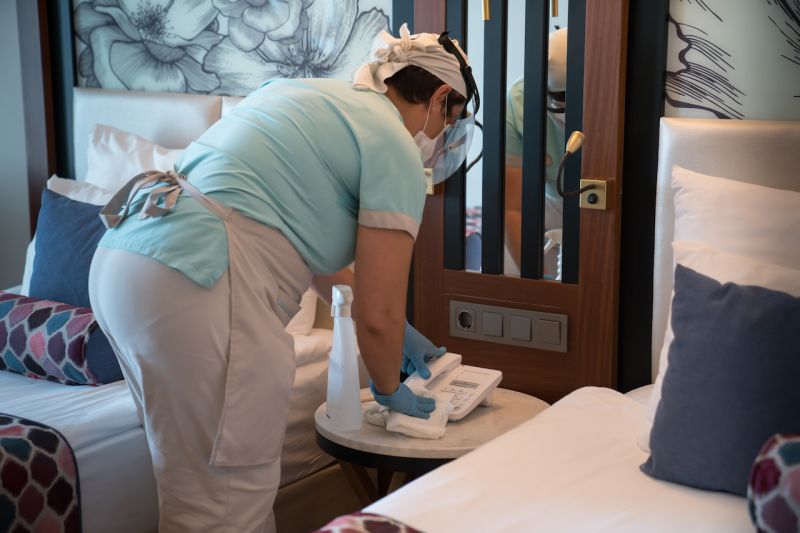 Hotel operators have watched their stocks take a beating this year. Even Disney World's reopening did not see surrounding hotels packed full of customers. Turns out families are not itching to walk around the Magic Kingdom in scorching Floridian August heat to see Mickey Mouse dance around with a mask.

It's been bad for hotels, really bad. This bad...

Hotels have already lost more than $46 billion in room revenues since the coronavirus nightmare began in mid-February, according to figures from the American Hotel and Lodging Association (AHLA), as cited by Fox News last week.

Some experts say the pandemic has delivered the biggest blow that the hotel sector has ever endured. The AHLA is forecasting that hotels are "currently on pace to lose up to $400 million in room revenue per day based on current occupancy rates and revenue trends."

And hotel employees have been hammered. While the hospitality industry has finally begun to rebound a bit, unemployment in the hotel sector is still more than 43 percent, according to the industry intelligence platform Skift.

Earnings have been abysmal to no one's surprise. Will they recover? Let's take a look at some hotel stocks. Which to buy, hold, or sell.

Even a giant like Marriott International, Inc. (Nasdaq: MAR) hasn't been immune to the nightmarish trends in the industry. Despite getting hammered by sell-offs this year, Marriot is riding a five-day winning streak. The stock has now rallied 16% since last Monday.

Today, Marriot reported for the second quarter that its revenue tumbled 72% year-over-year to $1.46 billion on an adjusted loss of $234 million, or 64 cents a share. Analysts polled by FactSet were anticipating revenues of $1.68 billion on a loss of 41 cents a share.

Despite the declining financials, Marriot is starting to see improvement. After worldwide occupancy rates for the 7 days ended on April 11 "bottomed at 11 percent," the company has been seeing improvement each week; the figure jumped to 34% for the week ended Aug. 1. But it is especially starting to see recovery in the "Greater China" area. The region's occupancy rate levels are now reaching 60% versus 70% in the same period in 2019.

Craig S. Smith, the Asia-Pacific group president of Marriot told Reuters in an interview in July that the area could start recovering to pre-pandemic levels by early 2021.

"Obviously Asia will lead the world recovery in our industry," Smith said.

He added, "For all the Asia-Pacific I think the recovery to pre-COVID levels will be next year. We are hoping that China recovers sometime around the first quarter of 2021."

However, that time table is still months away and the rest of the world remains a big question mark. After the company's earnings release this morning, Jim Cramer said that a vaccine is the only thing that can help Marriot's stock, according to an interview posted by TheStreet. However, he also said he would not bet against the hotel giant and that "Marriot is the survivor and others will fail."

I would look to buy it if the stock falls back under $85 per share.

Late last week, Hilton reported its second-quarter financials. Revenue declined 77% year-over-year on an adjusted loss of 61 cents a share. The revenue figure missed estimates by 30%, while loss per share was expected to be 31 cents a share. While they weren't Paris Hilton pretty, its stock has continued to inch upwards.

Some good that came out of the quarter for the global hotel chain was its occupancy levels, which have begun to rebound. Hotels in the U.S. and the Asia Pacific region rose roughly 20 and 15%, respectively.

After the company reported its financials, Jefferies's analyst David Katz said he did not expect Hilton to get hammered on the news.

He said, "despite the lower-than-expected results, we expect a neutral reaction to the results, based on the strong pipeline and liquidity position". As of June, it had cash and cash equivalents of $3.57 billion with $10.6 billion in long-term debt.

Before reporting its financials Thursday, Hilton was already on a three-day winning streak. Now trading at $86 per share, Hilton like its rival Marriot has extended its winning streak to five days. However, the stock is a hold for now. Shares of Hilton are down 22% YTD.

Meanwhile, a mid-cap firm Hyatt Hotels Corp. (NYSE: H) just reported its second-quarter last week as well—and they were completely lopsided. Starting with the good news, Hyatt Hotels brought in $250 million in revenues for the first quarter, crushing analysts' projections of $180 million. As for the bad news, Hyatt missed the loss consensus badly by 39 cents a share. It posted a net loss of $183 million, or an adjusted loss per share of $1.80.

The mixed results resulted in not much stock movement in either direction. As for investors who bought or held in January, their shares are still down 43%.

But there is another positive, the Chicago-based hotel chain is also seeing recovery from the "Greater China," along with other areas that were first hit by the pandemic; occupancy returned to 65% in China by end of July. Despite the widespread belief  that the hotel industry will not recover until there is a widespread vaccine or treatment, Hyatt CEO Mark Hoplamazian offers a different, more optimistic view:

"China serves as a great example that travel recovery is possible even without pharmaceutical treatments or a vaccine as long as proper, well-coordinated actions are taken to significantly reduce the spread of the virus," he said last week during an investor call.

Yes, China has excelled in containing Covid-19, but the nation alone won't help save Hyatt's business even if it does fully recovery—and other nations in the West are both unable and unwilling to enforce the kinds of draconian measures China instituted to curb the spread of the disease so successfully.

Hyatt operates more than 900 hotels with a presence in more than 65 countries. As of May 2019, it occupied 74 hotels in Greater China.

At $54 per share, I would place a hold on the company for now. But watch this stock as we get closer to a vaccine or a game-changing treatment.

Host Hotels & Resorts, Inc. (NYSE: HST), which owns luxury and upper-upscale hotels, has also recently reported its second-quarter financials  In late July, the company posted revenues of $103 million, down 93% year-over-year on a quarterly adjusted loss of 26 cents a share in the second quarter. The Maryland based company's revenue beat the Zacks Consensus Estimate by 0.64%, while its loss per share was right in line with expectations. The stock, however, stood mostly unmoved.

Before it reported its financials, Patrick Scholes, an analyst at SunTrust Robinson Humphrey already gave up on six hotel operators. His sell list includes Host and Hyatt, which he now has a price target of $8.00 and $42, respectively.

Anticipating a long-than-expected recovery from Covid-19, he wrote in a note to clients: "Three months ago, we had optimistically believed and modeled that business travel would begin to show green shoots in July; however, we are increasingly concerned that such optimism was far too hopeful, especially for business and group-centric hotels."

Scholes continued, "We are now nearly in August and have seen scant evidence that such a recovery has begun to take hold, both from out statistically significant 'big data' research, anecdotal conversations with privately held hotel companies and from corporate travel departments."

While more pain for shareholders is on the horizon, I would hold rather than sell both Host and Hyatt. Unfortunately for Host, it has 75 of its 80 properties in the U.S. Like Hyatt, if you have held shares since the beginning of the year and have been crushed nearly 40% YTD, these shares are worth holding until things change.

Chinese hotel operator Huazhu Group Ltd., (Nasdaq: HTHT) which gave a disappointing preliminary outlook for the second quarter in July. While Shanghai-based Huazhu was seeing its occupancy rate improve "steadily" from March to mid-June, it noted it impacted by Beijing's implementation travel restrictions on fears of another outbreak.

European operations have also impacted the company, specifically regarding its newly-acquired German hotel group Deutsche Hospitality. But things in Germany are now picking up.

As of June, 24 of DH hotels (or 21%) were temporarily closed versus 74% 85 hotels (74%) at the end of April. In January, Huazhu closed its $779 million DH acquisition with a three-year loan from a banking group led by JPMorgan Chase Bank N.A.

In total, Huazhu expects second-quarter revenue tumble in the range of 32 and 34% year-over-year.

Huazhu, when compared with the American hotel operators, has suffered significantly less share price depreciation, with shares down just 10% YTD. still, I would avoid this stock because of the high Sino-U.S. trade tensions and because Huazhu hasn't provided a clear outlook for the third quarter or beyond. If you're a shareholder in the company, you will get experience at least one more painful quarter. After that, the upside could be both imminent and significant.

While there is value for patient investors in many hard-hit industries, the hotel sector in the U.S. should, at this point, be avoided. With cases rising and no end in sight, we will have to wait until a vaccine—plain and simple.

"We are likely going to have maybe tens of millions of doses in the early part of [next] year," Dr. Anthony Fauci told Reuters last week. "But as we get into 2021, the manufacturers tell us that they will have hundreds of millions and likely a billion doses by the end of 2021."

Even though he has been "cautiously optimistic," the U.S.'s top infectious disease official could not guarantee "things with a vaccine."

The Industry May Not Fully Recover Until 2023

Now, if and when the vaccine becomes widely available, when will people start feeling comfortable enough to travel? If there are "tens of millions" of doses available early next year, will travel pick up in Spring or early Summer? Even then, the hotel sector might see mostly vacant profits until 2023, according to a revised forecast from STR and Tourism Economics.

"Compared with our last forecast, we actually improved our demand projection for 2020 from -45.0% to -36.2%, but we expect it to take 11 quarters for the number of room nights sold to rise to the corresponding levels of 2019," Jan Freitag, STR's senior VP of lodging insights said.

He continued "Similarly, it will take until 2023 for occupancy to reach the 20-year historical average."

Before the pandemic spread across the world, the global hotel sector was valued at $570 billion in 2019, according to statistics cited by Condor Ferries. In 2018, the Marriot contributed the most revenue, generating $20.8 billion.

No matter how long it takes, people will be itching to travel the minute they feel safe to do so. By Halloween, we may know if Moderna's or Pfizer's or Astrozeneca's vaccine is viable.  While now isn't the best time to be buying, investors should hold through the fall. And even then it may be a while longer until even rapper Pitbull meets anyone at any hotel room—except maybe the Macheng Marriot.

YOU MAY LIKE
Prev：Tencent Proposes to Support Stock Merger of DouYu and HUYA Next：Can Trump Ban Them All? TikTok, WeChat Users Must Pick Sides