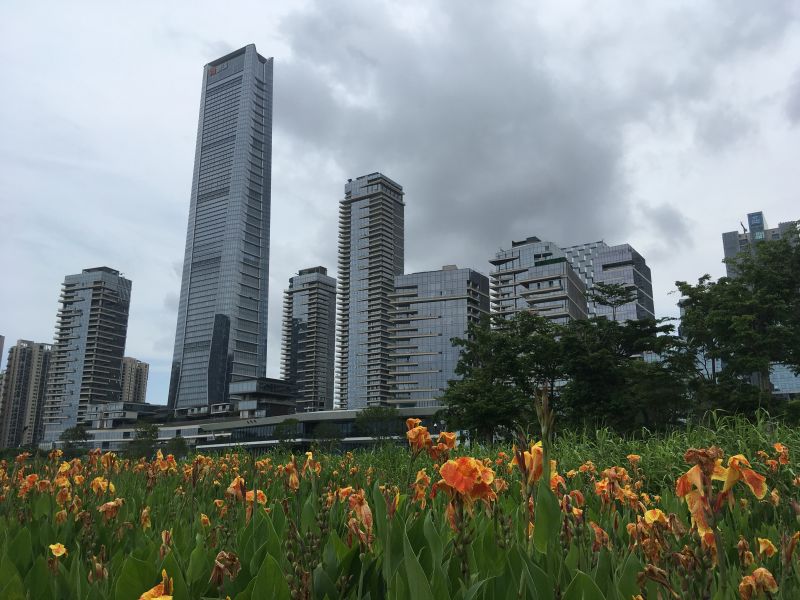 After a lukewarm start this year, China's real estate market is beginning to heat up despite the ongoing uncertainty from Covid-19 and its impact on household income, jobs, and the economy.

The first-quarter drop followed a property boom in May, with sales jumping 9.7% from a 2.1% decline in April; real estate investment continued rising and so did prices on new homes, according to China's National Bureau of Statistics and Reuters calculations. Last month, China's home prices grew 5.3% year-over-year, following an increase of 3.9% in the previous month. The market, it seems, is starting to pick back up.

Against the backdrop of the recovering market, a digital giant operating in the sector, China's KE Holdings Inc., lifted off in an initial public offering worth $2.12 billion last week, drawing massive investor interest.

It goes without saying that Washington and Beijing are at one another's throats politically with tensions between the two nations higher than any time since President Nixon normalized U.S. relations with the PRC. The Tit-for-tat trade war has spilled over into the equities markets, with legislation on its way to becoming law in the U.S. that may result in many Chinese companies trading in the U.S. to be delisted from exchanges, voluntarily or involuntarily.

But while U.S. investors remain somewhat skeptical of Chinese companies in light of the Luckin Coffee fiasco and other Sino-scandals, recent IPOs of Chinese companies in the U.S. have proven that the American investor appetite to profit from China's rise through its companies has not been significantly diminished. What American investors are looking for in Chinese companies are real businesses with real revenue operating in a real and tangible market. Companies operating in China's real estate markets have found and will continue to attract U.S. investors over other, more speculative companies. This could bode well not only for KE Holdings but for potentially undervalued companies in the China real estate space.

"If you're looking for a bellwether for Chinese issuers in the U.S., the largest Chinese deal of the year is a good candidate," said Renaissance Capital senior strategist Matthew Kennedy to CapitalWatch before KE Holdings debuted in New York.

Kennedy added that the real estate company is "well-integrated" into China's overall economy which, in part, bodes well for its attractiveness to some wary U.S. investors.

Now, what can we expect from KE Holdings' trading? And how might it affect other Chinese property technology companies such as Fangdd Network Group Ltd. (Nasdaq: DUO)?

Let's take a look at the market and real estate service providers utilizing technology and digitization to capitalize on current and future consumer trends.

While Beike is the biggest marketplace in terms of housing transactions in China, other companies in the space like Fangdd Network Group (Nasdaq: DUO) and Fang Holdings (Nasdaq: SFUN) might represent better value for new shareholders and may experience significant appreciation on the heels of KE Holdings' IPO.

Kennedy said, "…If BEKE ends up trading very well, that could be a positive sign for DUO, which would then have a close peer with a high multiple, and potentially see its own valuation rise because of it."

Unlike Beike, Fangdd focuses on empowering real estate agents through an "agent-centric" technology platform, rather than operating an agency of its own. Fangdd has been growing in terms of active agents and closed-loop deals, or property sales carried out from beginning to close through its platform. The company serves independent mid- and small- size agents which are based in Shanghai, Shenzhen, and other major metropolitan areas.

Fangdd has posted four financial performance reports this far since going public on Nov. 1, 2019. According to the figures in the reports, revenue was growing at an impressive pace until Covid-19 sent China's businesses into chaos in early 2020. China's real estate market was particularly hit hard.

As a result, Fangdd saw revenues plunge in the first quarter along with the overall real estate market in China. However, while Fangdd Network Group had negative earnings before interest and tax (EBIT) over the last 12 months, the company was able to generate positive free cash flow of approximately $16.9 million. Also, total liquid assets outweighed total liabilities. If it continues to perform, the company is on a trajectory to eliminate debt and prove profitable.

Despite the drop in revenue due to the struggling China real estate market early in the year, the company's "one-stop-shop" property technology platform enjoyed a surge inactive agents, fueled by the trend towards digitization.

The number of active agents in the first trimester reached 218,500 compared with 153,000 in the same period of the preceding year, according to the company. This surge is expected to fuel growth as the market begins to recover.

The Promise of PropTech

Even prior to the Covid-19 outbreak, property technology, or "PropTech," was expected to be "the new growth engine for China's slowing real estate sector," according to the South China Morning Post. Today, boosted by the shutdown of brick-and-mortar businesses, the trend has been accelerating. Companies on the forefront of the PropTech like Fangdd stand to significantly benefit. The key to the company's successful technology platform is, according to the company, its "exceptional AI, big data, and SaaS capabilities."

Fangdd's platform, powered by its proprietary SaaS technology, works as a combination of Salesforce.com and TaoBao (SaaS technology + third party online platform). The more agents it serves, the more data and solutions it offers, which in turn leads to an increase of property listings, better matching and conversion, and more business growth. This ecosystem increases user stickiness. There are more than 136 million verified properties on Fangdd's real estate platform.

What do we see in Fangdd?

Fangdd's asset-light SaaS model has many advantages over Beike. Though Beike has 50 times the number of employees as Fangdd, it generates only ten times the amount of income and only 3 times the amount of net profit, which illustrates the extremely high operational efficiency behind Fangdd's light mode platform. This is one of the key reasons why we believe the stock is undervalued at current levels.

Fang Holdings is a Hold According to Hedge Funds

Another real estate internet portal is Fang Holdings Ltd. (NYSE: SFUN). Fang provides marketing, listing, and financial services, as well as home furnishing and improvement. Unlike Beike and Fangdd, this company reported positive revenue growth in the first quarter, a 9.4% increase – thanks to the year-over-year improvement in its marketing and leads generation segments. However, the stock has taken a beating this year; the stock price has been cut in half since mid-January. Even the recent 10-to-1 reverse stock split on June 19 has not pushed the stock much higher.

While the stock at this price level might be considered undervalued, according to hedge-fund focused market news outlet Insider Monkey: "At Q1's end, a total of four of the hedge funds tracked by Insider Monkey held long positions in this stock, a change of -33% from the fourth quarter of 2019. On the other hand, there were a total of 8 hedge funds with a bullish position in SFUN a year ago."

In other words, smart money is starting to have doubts about the company.

Lastly, 58 Home, a home maintenance service provider operated by China's largest classifieds platform 58.com (NYSE: WUBA), has also taken steps toward a listing in New York earlier this year. The company is one of 58.com's core businesses, seeing a net gain of 2.7 billion yuan in the first quarter for its deconsolidation of 58 Daojia. 58 Home had reportedly dropped its listing plans at the outset of Covid-19, while its parent has recently agreed to go private. 58.com also operates Anjuke, which it acquired in 2015 with the goal of creating China's largest secondary property sales platform.

58 Home hoped to reach a valuation of at least $2 billion, according to various sources, and we may expect it to pick up listing plans as the sector recovers. Its rival, E-Home Household Service Holdings, has publicly filed its prospectus with the U.S. SEC in February, seeking a small $28 million IPO, but also seems to have put off its ambitions.

Property in the PRC

Meanwhile, the property sector remains a key driver of growth in China, and one supported (and heavily regulated) by the government. Beijing is fighting real estate speculation at the same time as it seeks to boost the economy. Mortgage rates have been pushed lower this year thanks to the central bank's initiatives, while developers offered discounts to buyers, which further spurred growth, S&P Global Market Intelligence reports. In China's top cities, the market boomed and even the non-tier-one and -two cities showed a strong improvement.

Some experts, like CEO of Midland Holdings Ltd.'s China division, Victor Cheung, are cautious on the 2020 outlook. Other experts are more optimistic. In a June interview with CapitalWatch, Robert Ciemniak, head of Real Estate Foresight, predicted that China's property market, in terms of price growth and volume growth for new homes, will turn positive by year-end after the year-over-year decline of 11.8% in January through May.

The table below from Frost & Sullivan illustrates the massive growth trajectory of China's real estate market.

The real estate market in the world's second-largest economy may be the first place that U.S. investors interested in China look for profits. KE Holdings' IPO should show us whether the U.S. investor is willing to set aside politics and prior Chinese stock-related mishaps and bet big on China real estate.

However, investors would be wise to look to undervalued companies like Fangdd which may draw increased investor interest after KE Holdings' highly publicized IPO.

All information contained herein as well as on the capitalwatch.com website is obtained from sources believed to be reliable but not guaranteed to be accurate or all-inclusive. All material is for informational purposes only, is only the opinion of capitalwatch.com and should not be construed as an offer or solicitation to buy or sell securities. The information includes certain forward-looking statements, which may be affected by unforeseen circumstances and / or certain risks.  This report is not without bias. Please consult an investment professional before investing in anything viewed within.

YOU MAY LIKE
Prev：BlueCity, Asia's Top LGBTQ Platform, Scores Another 'Buy' Next：BlueCity's Blued Hits 50,000 Mark on Appointments for HIV Testing