Home
China Stocks
U.S. Stocks
Commentary
Investor Relations
Partners
About Us
Will China Avenge Huawei Ban by Trying to Slice Into Apple's Profits?
China is the third-largest market for Apple after the U.S. and Europe and accounts for a quarter of its revenue. 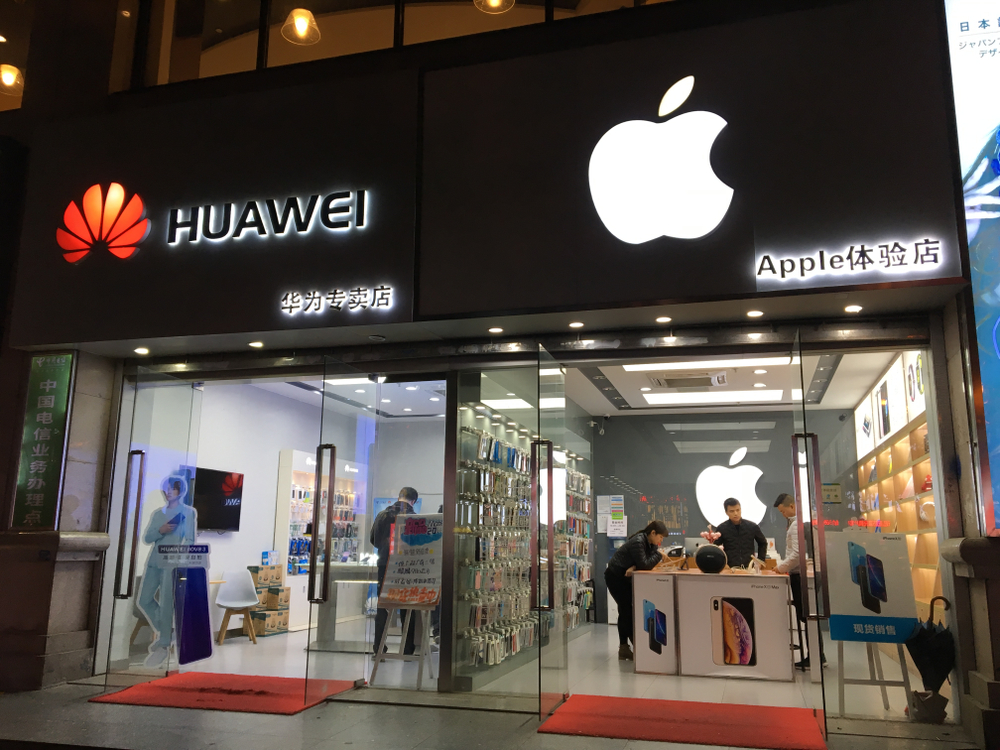 Although it's technically not the first global company to achieve this record - that honor goes to oil and gas behemoth Saudi Aramco back in December 2019 - it is still an incredible accomplishment. (Apple recently overtook the Aramco as the world's most valuable publicly-traded company.)

Despite the economic disruption caused by the pandemic, Apple still managed to increase sales for its flagship iPhone during the second quarter.

Dan Ives, a technology research analyst with Wedbush Securities, predicts that the company will reach a $3 trillion valuation due to the move to 5G and Apple’s growing services segment.

There are certainly some potential headwinds that could prohibit Apple’s rise, most notably - China.

The same week that Apple achieved a $2 trillion valuation, the U.S. Commerce Department issued new regulations that limit Huawei from getting chips that were made using American equipment or software.

These new limitations are in addition to the initial U.S. restrictions imposed in May that required international semiconductor companies that rely on American technology to get a license before working with Huawei.

The Trump Administration has frequently accused the Shenzhen-based tech giant of spying on behalf of the Chinese government, which Huawei has always denied.

In spite of the regulations from May, Huawei still managed to overtake Samsung Electronics as the biggest smartphone seller in the world during the second quarter. Huawei achieved the title due to its strong demand in China.

Seeing that its initial regulations were not stymying Huawei, the U.S. Commerce Department turned to harsher restrictions this week. There are now 38 affiliates with commercially available chips in 21 countries that are prohibited from working with Huawei.

While the news might seem like a “death sentence,” which is how Dan Wang of Gavekal Research described the move, it hasn’t impacted the markets. Huawei’s publicly-traded partners and competitors have experienced little increased share price volatility.

Zhao Lijian, a spokesperson for China’s Foreign Ministry, described the new regulations  as “nothing short of bullying” and called the U.S. an “empire of hackers.”

“The Chinese government will continue to take all necessary measures to safeguard the legitimate and legal rights and interests of Chinese companies,” Lijian says.

Denouncing the restrictions is probably just the first step. In its trade war with the U.S., China has often retaliated with its own tariffs.

This time, China could get revenge by targeting the crown jewel of the surging U.S. tech market - Apple.

Between Apple’s $2 trillion valuation achievement and the new penalties against Huawei, the timing would be ripe for China to unleash commensurate restrictions against Apple.

If China hit Apple, the blow would be devastating. China is the third-largest market for Apple after the U.S. and Europe and accounts for a quarter of its revenue. Its iPhone sales in China increased by a third in the second quarter.

China has been more reluctant to retaliate against the U.S. in the past, outside of tariffs, in order to preserve the international cooperation that has propelled its economic growth.

But this new attack against Huawei might be the last straw.

If China were to hurt Apple, it could disrupt its supply chain by imposing its own parts restrictions.

It could also go the legal route against Apple, just as Zhizhen Network Technology is doing now. The Shanghai-based company recently filed a patent-infringement lawsuit against Apple for $1.43 billion, which could prevent Apple from selling in certain international markets.

If China wanted to try a more forceful retaliation, it could cut off Apple’s manufacturing by raiding the factories that are assembling iPhones. A more covert option involves China getting its citizens to buy phones from Huawei instead of Apple, which would hurt its sales in the country.

Part of the reason China hasn’t targeted Apple is fear of such a move backfiring. A 2017 analysis found that Apple is responsible for creating and supporting nearly 5 million jobs in China.

China could choose to strike Apple after November, depending on the results of the U.S. presidential election. But there is also a good chance it will do nothing at all. If China does slice Apple out of the Middle Kingdom, the tech company's future $3 trillion market cap might not come to fruition, and certainly not by 2023.

Apple survived the pandemic in part due to its presence in China. Investors may want to wait to see whether Apple's stock will fall should China unleash such an attack. A temporary dip in the stock on news of such an attack might be a perfect time to scoop in.