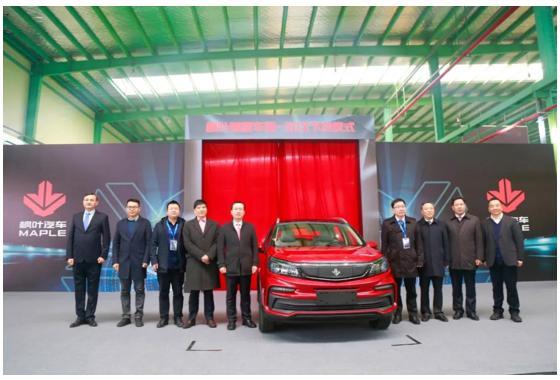 Kandi Technologies Group, Inc. (Nasdaq: KNDI) announced on Wednesday that its affiliate has unveiled its first production electric vehicle (EV), the Maple Model 30X at a ceremony in Rugao,

The Maple 30X, made by Fengsheng Automotive Technology Group Co., Ltd., was showcased in front of government officials and executives from its long-time partner Geely Technologies Co. Ltd. at a launch conference, Kandi said in a statement today.

In September, Geely obtained a 78% stake in Fengsheng, which was known as Kandi Electric Vehicles Group Co., Ltd. at the time. The partnership between Kandi and Geely dates back to 2013, when the two agreed on a 50-50 split to develop, manufacture and sell EV products and related auto parts through Fengsheng .

The Maple 30X was given test drives by guests at the ceremony and those who participated praised the vehicles overall driving performance, according to Kandi.

On top of that, He Yijun, the Mayor of Rugao said during the ceremony that the Maple 30X would a “vital element” to drive the growth in the city’s EV industry.

Earlier this week, Kandi received some good news from Beijing. For July this year, Wei Miao, China's minister for industry and information technology said it will not implement significant subsidy cuts for new EV’s.

Dating back to March, when the South China Morning Post reported that the subsidy cuts would take place, Kandi’s stock took a hit. In March, Kandi closed as high as $8.01 per ADS, whereas after the report of the cuts, it fell to as low as $5.28 apiece in the following month.  On Wednesday, Kandi’s shares rose 1% to $4.75 apiece from yesterday’s close.