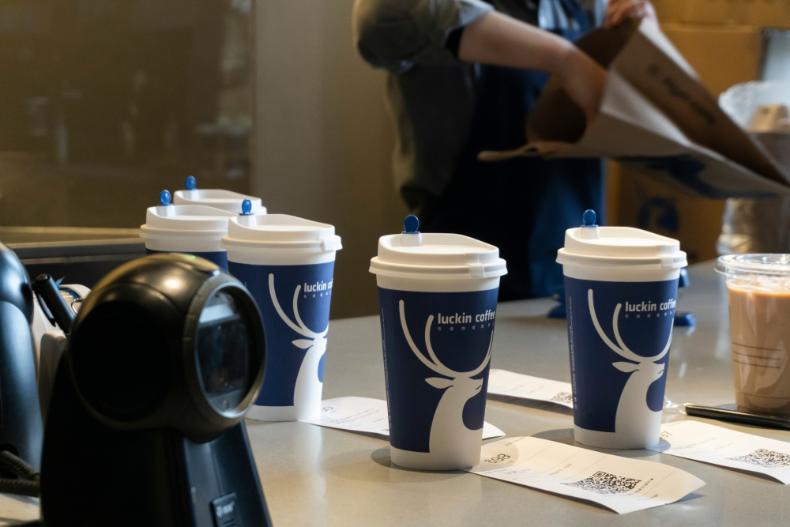 (CapitalWatch, Sept. 21, New York) Shares in Luckin Coffee (OTC: LKNCY) surged Tuesday after the company announced several developments, including fully resolving claims with the plaintiffs in a class-action securities litigation filed after May 2019.

That was the month when China's biggest coffee chain completed its successful initial public offering on the Nasdaq and raised $561 million, issued at $17 per share. In the months that followed, Luckin grew aggressively to outnumber Starbucks in China, raised follow-on capital, and rallied in trading to over $50 a share. Until a short-seller report was published in early 2020 and investigations into the company forced it to confirm to fraud. In April 2020, Luckin confirmed inflating its sales by over $300 million.

What followed was a 95% stock plunge, defaulting on loans and loss of assets, a delisting from the Nasdaq, the replacement of top executives including founder and chairman, Charles Zhengyao Lu, and fines to securities regulators in the U.S. and China, as well as class-action lawsuits. The case also had a significant effect on Chinese listings in the U.S., as both Wall Street and Washington launched campaigns to protect the U.S. investor from fraud that led to the tightened listing rules and, ultimately, played a role in the passing of The Holding Foreign Companies Accountable Act.

In its 2020 annual report, released Tuesday, Luckin posted $618.1 million in revenue for the full year 2020, at an increase of 33% despite the Covid-19 outbreak. Operating expenses exceeded $1 billion, which the company said was in line with its expectations and that included losses related to the investigations and restructuring. A cumulative 64.9 million active customers purchased Luckin products, a 20 million addition since the preceding year.

The company also stated that its 2020 annual report "contains Luckin Coffee's audited consolidated financial statements prepared under U.S. GAAP" and with its filing the company "believes that it is now current in its reporting obligations under the rules and regulations of the U.S. Securities Exchange Act of 1934, as amended."

Further, in a separate statement, Luckin said all claims filed from May 2019 to July 2020 on behalf of a class of purchasers of its ADSs will be settled based on a global settlement amount of $187.5 million, which will be reduced on a pro-rata basis.

"Upon final approval, this settlement will resolve a significant contingent liability and enable Luckin Coffee to move forward with a greater focus on our operations and the execution of our strategic plan," Guo said.

Lastly, Luckin has provided an update on its debt restructuring of a $460 million in bonds, as announced earlier. Luckin said it seeks court approval to convene for approval of a scheme of arrangement related to the Restructuring Support Agreement (RSA) of March 2021.

Guo also said, "Luckin Coffee is poised to emerge from this process as a stronger company with a growth trajectory that we believe will generate sustainable shareholder value for years to come."

In early trading on Tuesday, LKNCY stock surged as high as $17.35 per share. By afternoon, OTC stock in Luckin was 7% in the green, at $15.71 a share. That's a significant comeback from its level of $2.60 a share at the same time a year ago.