Zhong Yang on Winning Streak Even as Markets Tumble
The online securities trading platform celebrated its IPO two weeks back, and it hasn't seen a bad day since. 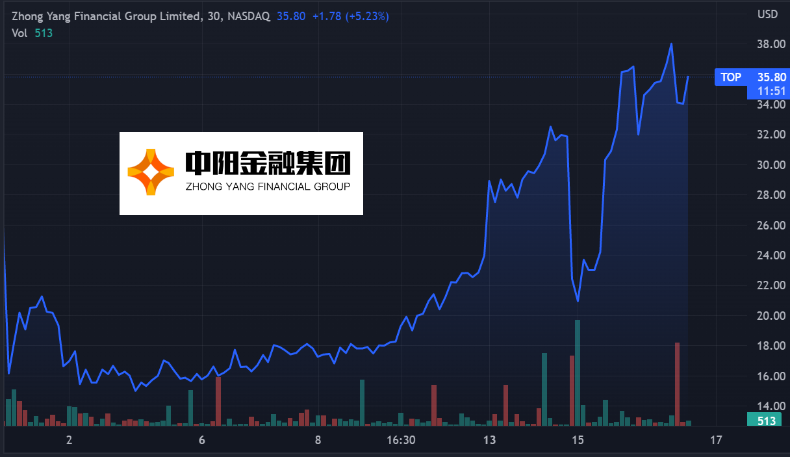 (CapitalWatch, June 16, New York) Even as stocks tumbled across the board on the Fed's rate hike, Hong Kong-based Zhong Yang Financial Group Ltd. (Nasdaq: TOP) continued its wild rally on Thursday, jumping an additional 14% as of intraday to $35.50 per share.

The rise today for TOP stock followed gains of 41% on Wednesday amid high volatility, with several trading halts. This occurred on a lack of major news from the newly public Zhong Yang.

The company celebrated its initial public offering in New York just two weeks ago, braving the storm and becoming just the third firm from the Chinese side to land the U.S.-listed status this year. Zhong Yang raised $25 million in its IPO by selling 5 million of its ordinary shares at $5 apiece and surged immediately upon liftoff.

Since tripling its market value on Day One in trading, Zhong Yang has mostly seen only gains. This morning, the company hit its highest level yet, peaking at $38.71 per share. Potentially, this means the underwriters on the IPO, Univest Securities LLC and Valuable Capital Ltd., could acquire an additional 750,000 TOP shares in exercise of the greenshoe option.

Zhong Yang is an online trading platform aiming to compete with China-based brokers Futu (Nasdaq: FUTU) and Up Fintech (Nasdaq: TIGR) for Asian investors worldwide. However, Zhong Yang appears to focus more on the institutional client base. During the fiscal year ended March 2021, the firm said its top five customers accounted for 92% of its total revenues. In the half-year through September 2021, that percentage increased to 95%.

The company first filed for a U.S. listing as far back as September, targeting to raise $30 million at the time. In its prospectus, filed with the SEC, Zhong Yang said its New York-based auditor is registered with the PCAOB and is subject to regular inspections, as required by the Holding Foreign Companies Accountable Act.